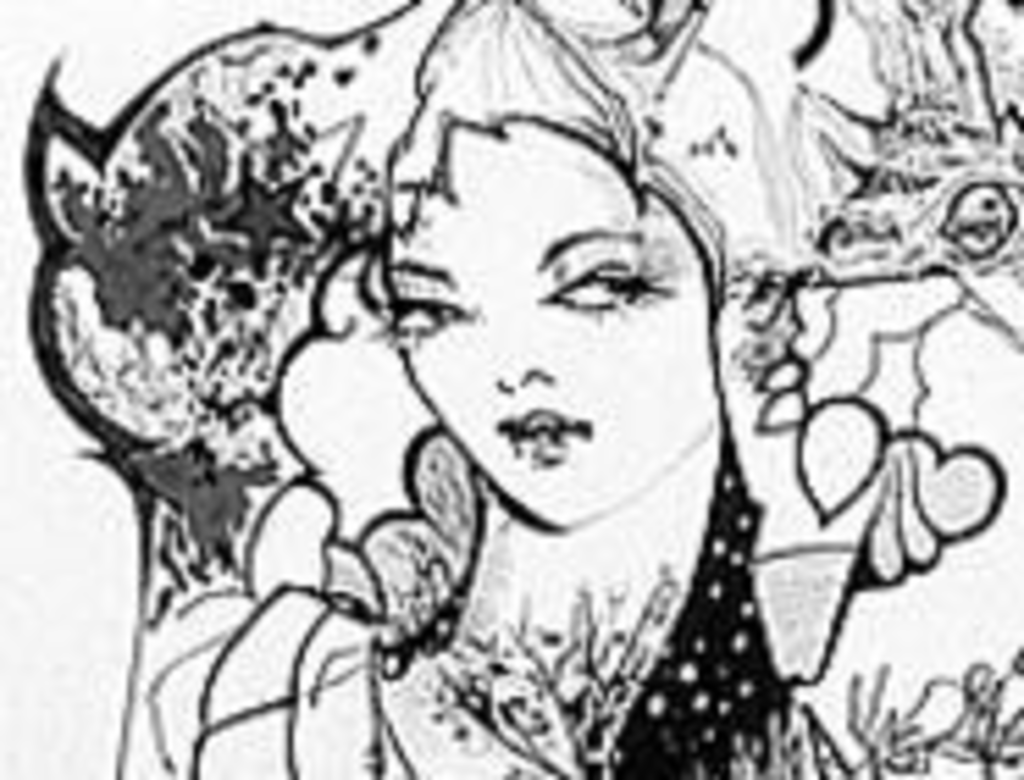 Meredith Burton‘s drawings look like gigantic, elaborate doodles. Black lines, some thin, some thick, swirl around the edges and through the middle of expansive white sheets of paper. After looking at the geometric patterns made of lines and dots for a few seconds, things begin to appear in Burton’s whirling eddies: eyeballs, tiny landscapes of fir trees, messages written in loopy, unintelligible handwriting. “The concept is in the work itself,” says Burton, a senior in the fiber and creative writing departments at the Kansas City Art Institute. “Hopefully, when people look at this piece, they will never see the same thing twice.”

Three of Burton’s large ink drawings on paper are on display in The Laser Office Party at the Next Space (512 East 18th Street) from May 7 to May 31. Also included are several of Burton’s smaller works on paper: prints and drawings of city scenes and barren Western landscapes, abstract graffiti, tattoolike images and pictures of women in fanciful costumes. T-shirts screen-printed with Burton’s drawings are also for sale. On opening night, Local Harvest provides hot food, and Braden Webb performs electronic music from 6 to 10 p.m. For more information call 816-421-1929.— Theresa Bembnister

Film snobs who hope one day to sniff at the latest release by a big-name director and proclaim “I liked the early work better” can get a jump things at Friday’s Second Annual Student Media Showcase. Put on by the University of Missouri-Kansas City Student Film League, the showcase features digital, 8-mm and 16-mm student shorts such as Liz Townsend’s People in Your Neighborhood and Matthew Sweetwood’s Short on Water, both of which screened at this year’s KC Jubilee Film Festival.

Discover new, emerging talent. Spend a couple of hours in the heads of creative young individuals. Rub it in your friends’ faces when the filmmakers hit the big time. The screening begins in Room 103 of Royall Hall on the UMKC campus (5100 Rockhill) at 6 p.m. after a 5:30 reception. Both are open to the public. Admission is free. Call 816-235-1000 for more information.— Christopher Blunk

Photographs can communicate what even the most articulate and eloquent words cannot, and they connect far faster than text can. This is particularly true of photojournalism. A Photojournalist’s View, the exhibit opening from 6 to 9 p.m. Friday at the Nine2five gallery (925 West 17th Street), examines the efforts of eight photographers who have worked in the Kansas City region, including Pulitzer Prize -winner John Filo, former Kansas City Star photographer Ed Hille and local photojournalists Roy Inman and Dan White. At least four of the photographers plan to attend, and much of the work will be for sale. For more information, call 816-363-6402.— Annie Fischer

Imagine those lucky bastards who bought Picasso’s early pieces for a mere pittance at his student exhibition. Those fat cats sat back, waited for him to get famous and watched their investments skyrocket. If you’re terribly lazy but fancy considerable wealth, check out the Kansas City Art Institute’s Student Exhibition and Sale this weekend in the studio departments (4415 Warwick). For times and details, call 816-802-3458. — Annie Fischer