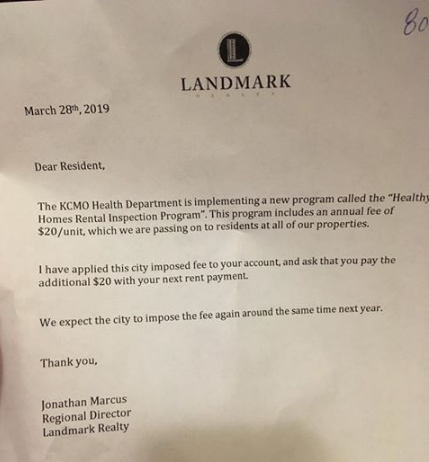 Tenants living at Kansas City properties owned by Landmark Realty opened their doors yesterday to find a letter informing them that there would be an extra $20 charge on top of their next month’s rent.

“The KCMO Health Department is implementing a new program called the ‘Healthy Homes Rental Inspection Program,’” read the letter signed by Jonathan Marcus, Landmark Realty regional director. “This program includes an annual fee of $20/unit, which we are passing on to residents at all of our properties. I have applied this city imposed fee to your account.”

The Pitch spoke to a resident at the Landmark Realty-owned Waldo Heights Apartments, near 81st and Campbell. She wished to remain anonymous, but says she read the letter and immediately got the sense that something about it just wasn’t right.

That concern was justified: Landmark’s $20 fee is literally illegal.

“No person shall charge or demand reimbursement of any fees arising from [the Healthy Homes ordinance], including late fees, annual permit review fees and re-inspection fees, to a tenant. The passing of fees from an owner or permit holder to a tenant shall be considered retaliation,” reads Chapter 9, Section C of the Healthy Homes Rental Inspection Program Rules and Regulations.

KC Tenants, a recently formed organization that fights for tenants rights and affordable housing, shared the letter on social media on Thursday evening. It found its way to the KCMO Health Department, which oversees Healthy Homes. The Health Department today gave notice to Landmark Realty that the fee must cease immediately or else face a court summons. Michelle Pekarsky, a public information officer with the Health Department, says city officials met today with Marcus and that he was very apologetic.

The company has now changed its mind and says the letter was a mistake.

“It was mistakenly sent out, we didn’t realize it was illegal, and it was quickly rectified,” Marcus tells The Pitch.

(Pekarsky says they’ve received between 5-10 complaints similar to yesterday’s about Landmark, but that there isn’t an official record of the complaints, because, so far, landlords have rescinded any charges to tenants associated with the Healthy Homes Rental Inspection Program, which began last August.)

The Pitch has been able to verify Waldo Heights, Ashton Place, Canyon Creek, Township, and Willow Creek Apartments as Landmark Realty-owned properties in Kansas City. An Ashton Place resident, who also wished to remain anonymous, says Landmark owns most of the properties that offer rent within his price range. According to the Ashton Place website, rent for a two-bedroom apartment is $700/month.

The woman who lives at Waldo Heights says that while a $20 fee wouldn’t have necessarily prohibited her from being able to afford living expenses, the cost was still comparable to one month’s electric bill. She also acknowledged that she and her roommate both work full-time jobs and don’t have any children or family members to support.

“A $20 fee for a landlord means almost nothing on your balance sheet,” says Tara Raghuveer, the director of KC Tenants. “A $20 fee for a low-income tenant means everything. That’s the difference between putting dinner on the table for their family or not.”

The KC Tenants post yesterday drew a response from Landlords, Inc., which offered landlords tips for how to get around the ban on passing Healthy Homes fees onto tenants.

“The program does not prohibit landlords from implementing general rent increases. It may be time to consider increasing your rents if you are concerned about the cost of complying with new regulations, increasing taxes, insurance, or other constantly increasing expenses of providing housing in KCMO,” Landlord’s, Inc. wrote on its Facebook page.

Councilman (and mayoral candidate) Quinton Lucas, who chairs the Housing Committee, questions whether that is even legal.

“Just increasing rents based on that ordinance is retaliation,” Lucas tells The Pitch. “I would be happy to litigate that on behalf of all the tenants in Kansas City, Missouri, because it’s not right. There needs to be an ordinance adjustment in connection with it, and we need to have a conversation about that quickly.”

Raghuveer says she hopes to see a statewide move toward rent control, which would also prevent landlords from being able to raise rents to make up for costs of programs like Healthy Homes. She says she hopes the situation with Landmark Realty can be seen as an instructive example of tenants exercising their power.

“This is a group of tenants who organized and called out their property manager for illegal actions, and it should be seen as an example of what happens when tenants organize and they know their rights, and demand justice,” Raghuveer says. “It’s a signal of what is to come.”