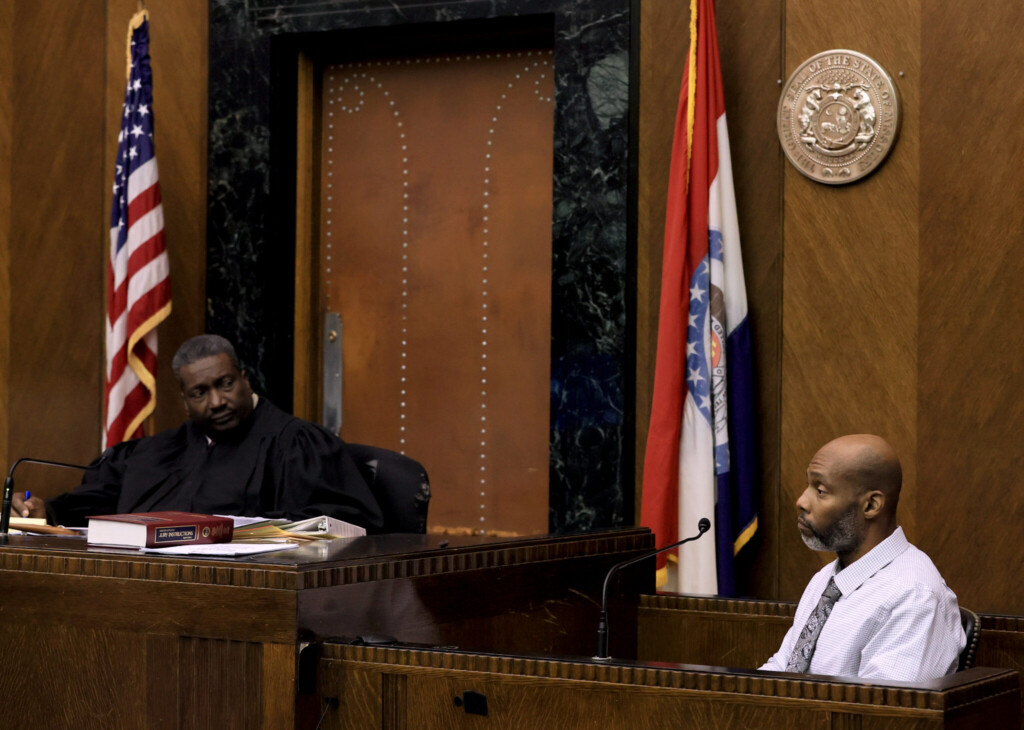 Lamar Johnson testifies on the stand during the fourth day of his wrongful conviction hearing in St. Louis on Thursday, Dec. 15, 2022. Circuit Court Judge David Mason is pictured to the left. // Photo by David Carson, dcarson@post-dispatch.com

After being imprisoned for nearly 30 years, Lamar Johnson finally got to tell his story to a courtroom on Thursday, when he testified that he didn’t kill his friend Marcus Boyd in 1995.

“To this day, I don’t know why people suspect that I killed him,” said Johnson, who had been roommates with Boyd at one point. “I thought of him as an older brother.”

It was the fourth day of a long-awaited hearing — and one that is being watched by legal experts throughout the state and nation. And it was the first time in court that Johnson was able to say in his own words why his 1995 murder conviction should be set aside.

Whether Johnson returns to prison is a decision that lies in the hands of 22nd Circuit Court Judge David Mason, who supporters are hopeful will rule in favor of Circuit Attorney Kim Gardner’s motion to vacate Johnson’s sentence that she filed in August.

Already, the judge has heard from James Howard, a convicted murderer serving a life sentence who testified on Monday that he and a now-deceased man named Philip Campbell — not Johnson — shot and killed Boyd.

Today, Johnson said listening to Howard’s testimony “hurt because I cared about Marcus.”

Campbell pleaded guilty to voluntary manslaughter in 1995 and received a sentence of seven years, which he served. Johnson pled not guilty to the same crime and was sentenced to life without parole.

However, Johnson testified Thursday that his public defender, David Bruns, discouraged him from taking the stand because Bruns didn’t want it to come out that Boyd and Johnson had previously sold drugs together.

Dressed in shirt and tie, Johnson testified he was at a friend’s apartment at 3910 Lafayette Ave. in South St. Louis with his girlfriend, Erika Barrow.

At one point, he said he stepped out of the apartment to make a drug sale at the corner of 39th Street and Lafayette Ave., and he drove around the block with his customer. The outing took about five minutes.

Other than that, he was with Barrow and other friends the entire time, something Barrow also confirmed in her testimony Thursday morning.

Johnson said he told police he was with his girlfriend that night, a fact that was also written in the police report. When asked Thursday if police detectives ever contacted her to confirm his alibi, Barrow said “no.”

At one point, Johnson broke down in tears when his attorney asked him to read a portion of a letter he wrote to a judge following his conviction.

“I have never been arrested for this long,” he read from the letter. “It’s the most terrifying experience in my life. It is even more terrifying or even more threatening than the hardships of life outside of these walls.”

The only eyewitness recants

Elking was then-assistant St. Louis Circuit Attorney Dwight Warren’s key witness in the 1995 case, but he testified this week that police detectives “pressured” and “bullied” him into identifying Johnson from a lineup. Elking said to this day, he has no idea who killed Boyd.

At the end of the second day, Mason said he believed Elking’s testimony was “almost a textbook case of suggestive identification.”

On Wednesday, Warren testified that he would have never brought the case in the first place without Elking’s testimony.

“I didn’t have any evidence,” Warren said.

In his testimony Thursday, Johnson said the police detectives knew him from the neighborhood and wanted to see him put away.

After he was arrested and brought into the police station, Johnson said he had a disagreement with one of the detectives who interviewed him alone. The detective had asked him about weapons involved in a separate case, he said and Johnson refused to answer.

“He got mad and walked out of the room,” Johnson said. “He looked back and said, ‘I’m gonna teach you something that you’re never going to forget: The pen is mightier than the sword.’”

In Johnson’s 1995 trial, the detective testified that Johnson during the unrecorded one-on-one interrogation made the spontaneous comment, “I should never have let the white guy live,” meaning Elking.

Johnson’s case is only the second innocence case heard by a judge in Missouri since a new state law went into effect last year giving prosecutors the authority to ask a judge to set aside convictions in cases of innocence or wrongful prosecution.

The law arose because of Johnson’s case.

In 2019, Gardner filed a motion for a set aside Johnson’s conviction, the first exoneration case for her conviction-integrity unit.

The effort was squashed when the Missouri Supreme Court ruled in March 2021 that prosecutors didn’t have the right to ask for a new trial. A few months later, state legislators passed a law giving prosecutors a pathway to file motions to vacate sentences.

So in August, Gardner filed a 59-page motion arguing it was Campbell and Howard who killed Boyd.

Under the 2021 state law, if a prosecutor files a motion to vacate or set aside a judgment, the attorney general’s office could appear, question witnesses and make arguments at the hearing.

Attorneys representing the attorney general’s office have argued that Johnson is guilty.

When they cross examined Elking, Howard, Barrow and Johnson, the assistant attorney generals tried to discredit their testimonies by asking them about discrepancies in small details about prior statements.

They have yet to present evidence that Johnson is guilty, or that Howard’s admission of guilt is false.

While the state law doesn’t list calling witnesses as one of the actions the attorney general is allowed, Judge Mason has allowed it in Johnson’s hearing.

On Wednesday, Mason questioned Warren about the ability of a witness to identify a masked shooter at night, having only seen the killer’s eyes for a few seconds.

Nickerson defended the police’s identification process, saying Elking told him that he “was able to see enough of the facial features of the individuals to make identification.”