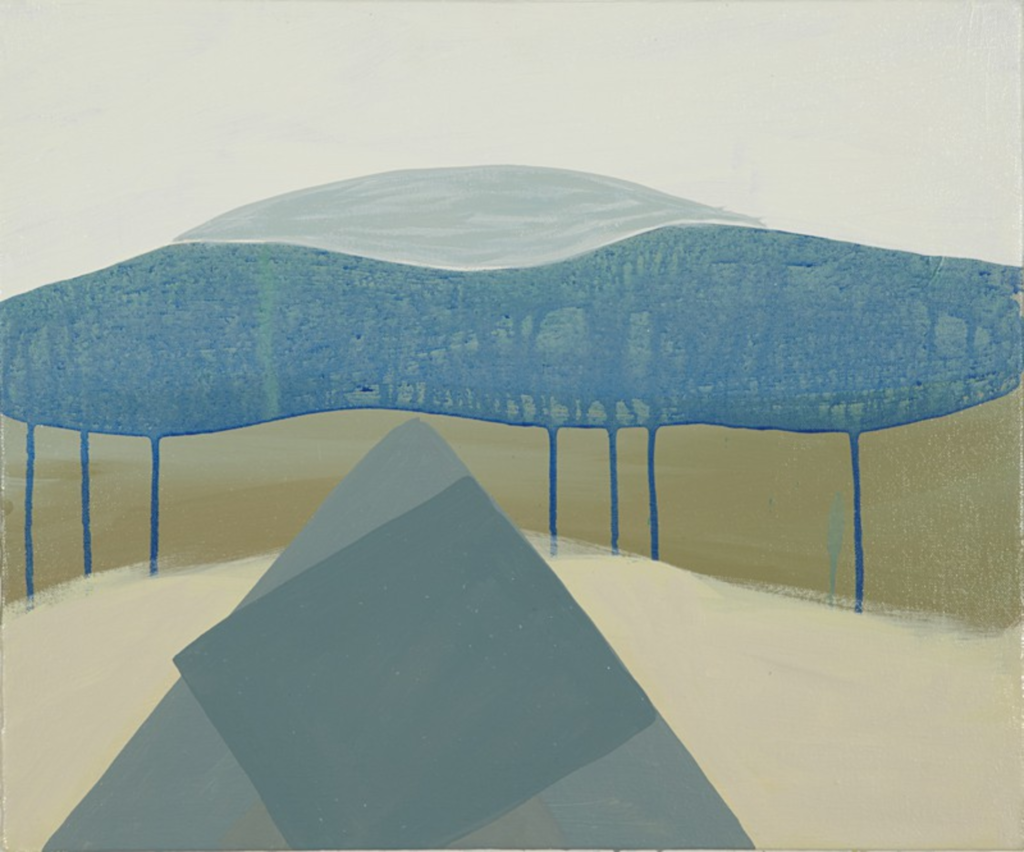 It’s idiomatic that familiarity breeds contempt, or at least boredom, and that seven-year marriages are “itchy,” necessitating premeditated date nights, sexy coupon books and wigs in the bedroom.

What if the crisis of imagination, though, is creative rather than conjugal? When writers get bored or repetitive, they sometimes come up with new rules that constrain their processes in order to have a different working experience — lest, like late-career John Updike, they continue grinding out tired contemplations of impending mortality and geriatric blow jobs.

Brooklyn painter Ky Anderson, who trained at the Kansas City Art Institute, apparently felt listless about her process, though that feeling isn’t obvious in her nimble, laconic abstractions. Nonetheless, for her exhibition of new work at the Dolphin Gallery, down in the low altitude of the West Bottoms — a destination that, for now, is inaccessible by way of the 12th Street bridge, which is closed — Anderson adopted a few new constraints in order to avoid distraction from the fundamentals of her imagery.

The most obvious is the reduction of her color palette to a dichromatic deployment of blues and greens. Her visual language is minimal: simple geometrics, gentle washes of color, canvas-spanning arcs, obvious brush strokes.

These paintings don’t always read as pure abstractions. A horizontal line divides “Underside #2,” suggesting ground and sky, a motif in Anderson’s work. The tactic is effective, alternately making the viewer’s eye dive into a landscape’s implied distance or, depending on what’s in the foreground (or missing from it), read the painting as flat.

“The Distance Is Closer #2,” a mostly symmetrical composition of deep-green curvilinear forms and pale-gossamer filaments emerging from a central blue-diamond shape, answers the eye’s question with its title.

The wit and simplicity of several of her titles, in fact, address the dimensional ambiguities of her work. Anderson leverages this cognitive tension throughout the exhibit, including in “Motion.” Against a similar visual horizon implied with a wash of green, she plays with oppositional rows of blue lines that expand into the top of the composition and diminish at the bottom.

Two large sister canvases, “Passing Through” and “Looking Through,” work in conversation, elaborating on one motif: an hourglass shape that jettisons linear elements for curves and arcs. The greens are more yellow in “Passing Through,” in contrast to the coolness of the surrounding exhibit’s palette, and a central blue hourglass form is crossed with greens and dripping paint. All blue disappears from “Looking Through,” and the work’s central hourglass is framed by a field of color, a stylized human eye.

Anderson bisects “Double Drop” with a childlike mountain shape, a sharp apex defined with a simple green line, the background a wash of green against which she strikes a pale form that recalls the symbol of infinity. The painting’s elements are bounded by a fat raindrop shape, and, as in many of these works, everything is just slightly off-center. The asymmetry of Anderson’s shapes engages in a way that suggests talking to somebody who’s really attractive and just slightly lazy-eyed.

The absence of anything literal challenges one to read the paintings in the way that one might look at late-period Mark Rothko surface images. But Anderson’s horizons exert visual gravity that pull one into a decidedly un-Rothko space. Anyone who can’t simultaneously entertain these two opposing ideas should avoid this exhibit, lest the paintings drive them to the very brink of madness, like the protagonists of every single H.P. Lovecraft story.

The gentleness of her approach is a good preventive for paradox-induced psychosis, though. As soft as Lou Reed’s “Candy Says” voice, which evinces a simple honesty that never feels childish, her paintings have no hard edges, even in her geometric constructions. Shapes are always defined with the imprecise variability of a human hand.

The paint, both acrylic and oil, is possessed of a translucence that sometimes evokes watercolor in memory. Anderson is permissive with runny fields of wet paint, allowing the expression of large drips across opposing colors. The aggregate effect is that of a handmade aesthetic and a singular voice — but a hushed voice, in the savvy manner of a person speaking quietly to get the listener to lean closer and pay more attention.

Also through September 4, the Dolphin exhibits a wall of work by Peregrine Honig. It’s an often-spectacular series of drawings and sketches on paper and doilies, and one work that appears to be executed on a doll’s dress. The effect is that of being privy to an artist’s sketchbook, and the works touch on fashion, mediated image, cute furry animals, and the tax implications of penis size. “Uniporn,” a drawing of unicorns fucking, shows off her fearless sense of humor. Honig’s incorporation of text into her work serves to emphasize her outsized cleverness, yes, but there’s also real thought behind her ruminations on relationships (good and bad) and on such issues as the confusion of image with identity.