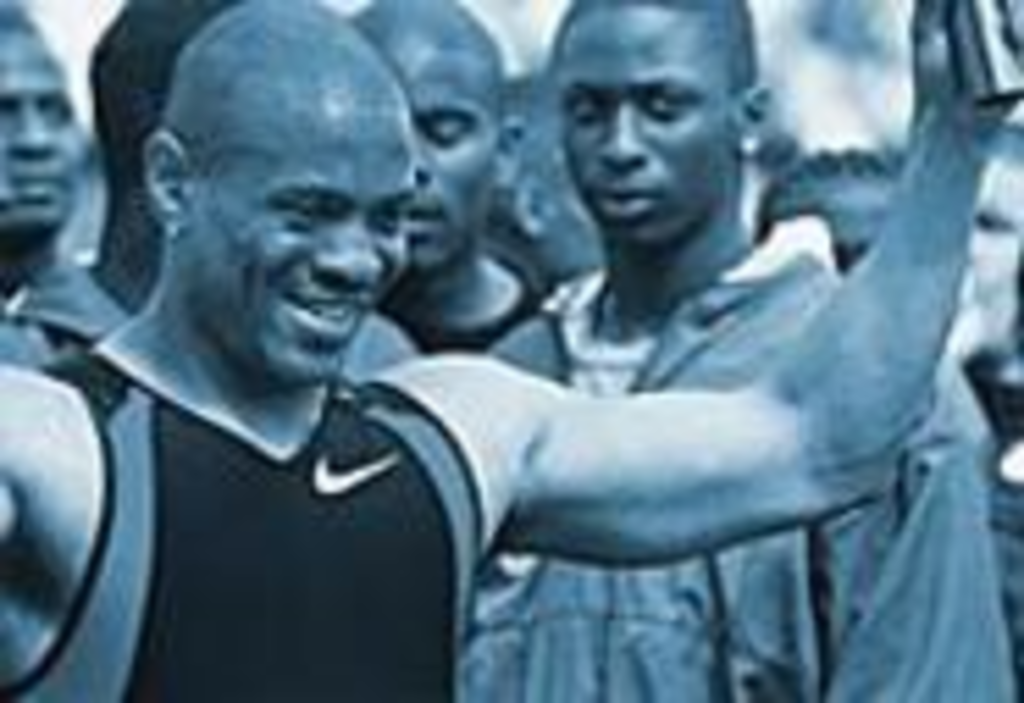 Prior to the multimillion-dollar renovations to KU’s Memorial Stadium that derailed the Kansas Relays in 1998 and ’99, track and field fans would have to go all the way back to the final years of World War II to find the last time the region’s finest track and field athletes didn’t make a spring stop in Lawrence. But enthusiasts couldn’t have asked for a better way to welcome back a racing tradition that dates all the way back to 1923.

The world’s fastest human, Kansas City, Kan., native Maurice Greene, returned to scorch the track for a new Kansas Relays record in the 400-meter relay, turning in a burning 38.45 seconds with his teammates. And it was done in front of a crowd of more than 10,000, one of the largest in the history of the Relays. Greene holds the world record in the 100-meter at 9.79 seconds.

“They haven’t had ’em the past couple of years, and it’s good to see ’em again,” says race fan Peggy Kittel of the Relays, which took place April 19 through 22. “We like to come every year, but this year especially … it’s Maurice.”

And Greene relishes the time in the spotlight.

“I really appreciate all the fans that came out and supported KU Relays for the first time in two years,” says Greene. “It always feels good to come back home and see a lot of people who’ve supported me since I’ve been 8 years old.”

Ato Bolden, one of Greene’s world-class teammates on the Hudson-Smith International team, says that with high school, junior college, and college athletes at the same meet, the atmosphere of the KU Relays is unique. “We’re fans of the sport first of all. We don’t get any less enjoyment from getting the stick around and getting a great ovation ourselves than we do from watching a high school girls’ team run the second- or third-best time in the state,” says Bolden. “We come out here and we’re track fans until we step on the track; then we’re track performers.”

Seeing great track performances is what it’s all about for 1955 KU graduate Dale Darnell. He’s been a fixture at the Relays for better than 40 years and has a wealth of amazing stories and statistics from the early days of the track and field extravaganza. “I was here when Wilt Chamberlain won the KU Relay high jump in 1956,” he recalls. “I saw Al Oerter, Billy Mills, Bill Nieder, Charlie Tidwell (all KU Hall of Famers) compete over the years.”

Darnell is rather ho-hum about Greene’s presence at the Relays, however. To this longtime track fanatic, Greene is just another world-class runner in the long line of great athletes to compete at the KU Relays. “We would have come whether he ran or not. Where else can you go with your wife, spend 10 bucks, and have this much fun?” Darnell asks.

It was certainly a fun week for Greene, who spent the time visiting his hometown and trying to make an impression on the kids at his former high school — Schlagle. “It’s been a very hectic week, but it’s something that I love to do,” he says. “When I was growing up, no athletes would come to the school and talk to us … and I wanna be different. That’s why I come back, so they can see me in person and not just me on the track. I wanna give them a little inspiration, and if I can help one of them, I believe I can help a thousand of them.”

The circuslike atmosphere surrounding Greene, enhanced by NBC camera crews reportedly working on a piece about the world’s fastest man for coverage of the upcoming Olympics, did not distract Greene one bit. “That’s how it is when we go to Europe,” he says. “A lot of times we can’t go out on the streets because people wanna crowd over us. It feels good, though, that they treat you like that.”

The aura surrounding Greene motivated several of the amateur athletes in the same field for the 400-meter relay.

“We just want to drop a good time, and then we’ll know how far we need to go,” says sophomore Walter Davis from the Barton County Community College team, which took third with a time of 39.57 seconds.

Barton County freshman Chris Hickman calls running against Greene “motivating” and says, “It helps you stay mentally ready to better yourself, especially against the world’s best.”

Even high school athletes, who have more important meets at the state level later this spring, feel there’s something special about the KU Relays.

“I think it’s awesome. It feels like State,” says Katherine Meyer, a junior from Emporia High School, who says the huge crowds and overall experience lend a much higher level of anxiety. “This is the first time in two years I’ve been nervous at a track meet. (My teammates) yelled at me five times Friday to make me stop shaking my hand or my leg because I was so nervous. It was just crazy.”

Meanwhile, Greene and Bolden look toward the Olympic trials this summer, but they’re already hinting about things to come at the 2001 KU Relays. “Judging from the response from the crowd and the general hospitality this past week, I’ve basically made a commitment that I’m gonna come back next year,” says Bolden.

Maurice Greene burns up the track at the KU Relays.

What's the plan for local movie theaters as they broach the COVID-19 nightmare?