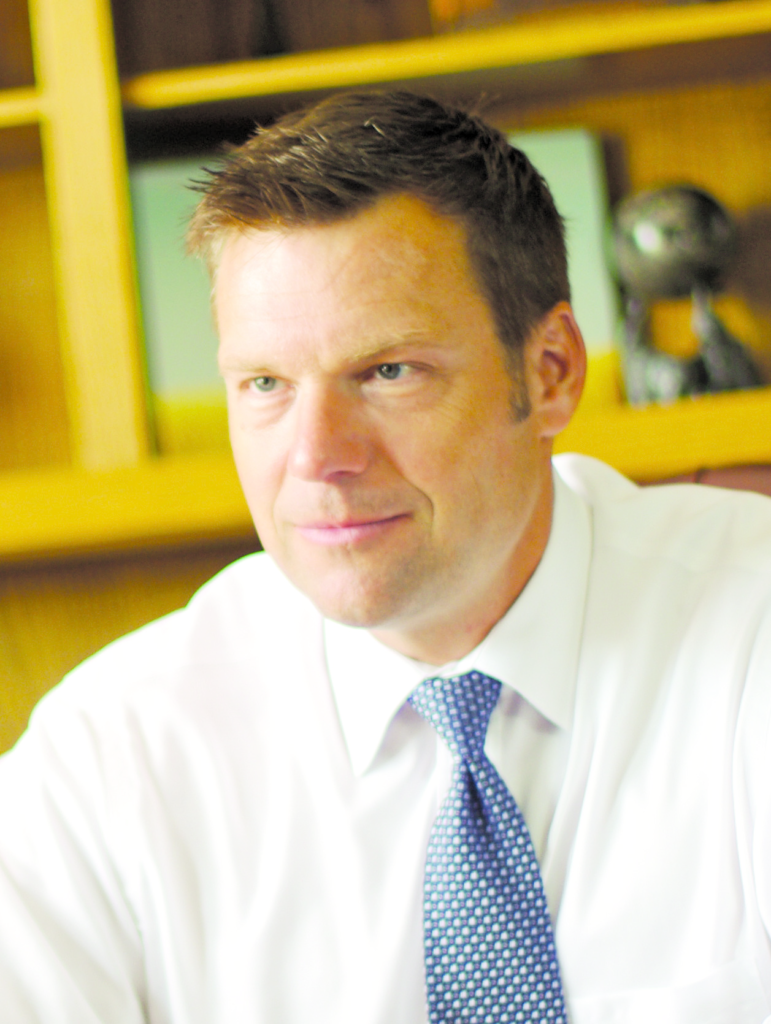 For all of a week, Kansas basked in the narrative of being the state that had seen the light. Thanks to action by its Legislature, Gov. Sam Brownback’s failed tax-cut experiment was finally history. Kansas had shown a perplexed nation that some leaders had remembered how to place common sense and quality of life ahead of ideology. Moderate politicians owned the day.

Then Kris Kobach announced he’d be making an announcement.

The GOP secretary of state swept into Thompson Barn in Lenexa with his wife, Heather Kobach, and their five daughters. He talked about his love for his family and for Kansas. He said the state’s greatness had been obscured by “petty partisan bickering.” Kansas deserves better, he said. And with that, the good week was over: “Today,” Kobach said, “I’m announcing my candidacy for governor.”

With a supportive audience applauding frequently, Kobach proceeded to outline a vision much darker than what Kansans have already endured under Brownback. The tax cuts and the endless budget deficits would come back. Cratered services would have dirt thrown over them. Legislative sessions would never end. And, driven by Kobach’s tireless aggression toward immigrants, Kansas would become the hate state.

Kobach’s announcement, complete with a meet-and-greet and some questions from the media, consumed 44 minutes. Unless you crave jaw-dropping hypocrisy from a demagogic politician, the video is nothing you need to pull up on your screen. Of course, I watched the whole horror show, and I can’t unsee its terrors. So I’m going to cleanse my brainpan by sharing Kobach’s presser with you. Pick your favorite quote and tape it to your voter ID — assuming you’re not one of Kansas’ diabolical election fraudsters.

Here he is, decked out in a dark suit and an aqua-colored tie, blasting Kansas “politicians” — as though he weren’t one himself — and sucking up to Donald Trump. Because, if this governor thing doesn’t work out, maybe the White House still has a place for him. “Instead of debating ways to put Kansas on the leading edge of the economic recovery that is occurring in the United States and that President Trump is leading,” he bloviates, “we have a Legislature in Kansas that on Tuesday passed the largest tax increase in state history. It’s outrageous.”

In the world according to Kobach, all that ails Kansas can be pegged to three factors: corruption, taxation and, yup, illegal immigration.

His idea of corruption is actually pretty tame. Politicians, Kobach says, hang around Topeka too long. He cites Senate Minority Leader Anthony Hensley, a Democrat. Hensley was first elected to state office when Kobach was just 8 years old. Now Kobach is 51. “I think it’s time to retire him,” Kobach says, vowing to work for term limits if he becomes governor. (Hensley will fire back later with a statement pointing to Kobach’s frequent moonlighting as an anti-immigration lawyer: “When he’s not using the state airplane to travel to political functions, he’s working with white supremacist hate groups to intimidate minorities and immigrants.”) Kobach also says lawmakers shouldn’t be allowed to jump directly into lobbying, though a reporter will later point out that some of his supporters in the room had done just that.

Next, a tirade about the Legislature’s reversal of the severe income tax cuts that Brownback and lawmakers enacted in 2012. This he equates to thievery. “They steal it, they take [money] from your pocketbook,” he says. He repeats the thoroughly discredited canard that “Kansas doesn’t have a revenue problem. It has a spending problem.”

He knows this because he himself has cut the budget of the secretary of state’s office by a third since his first election, in 2010. And it was painless! All he did, Kobach says, was wait for baby boomers in the office to retire and then eliminate their positions. The aging of the boomer generation, he says, presents “a historic opportunity” to shrink the size of government. Also, his office saved lots of money by using email instead of snail mail to transact business.

Kobach seems oblivious to the point that record keepers in the secretary of state’s office are likely more expendable than, say, child-abuse investigators or environmental inspectors — both in short supply in cash-starved Kansas. His office, he tells us, is doing more with less.

Actually, only one person in Kansas has been accused of voting while not holding U.S. citizenship. The other wigglers in Kobach’s dragnet are mostly older people who unwittingly broke the law by voting in two places where they held property. And his total of nine cases falls far short of the rampant voter fraud that Kobach warned about when he persuaded the Legislature to grant his office prosecutorial powers.

Still, this is Kobach’s political raison d’etre, so on he goes. “As many of you know, I’ve spent much of my life fighting against illegal immigration,” he says before talking about his role in crafting repressive anti-immigrant laws in states such as Arizona and Alabama. “I’ve also had the honor of personally advising President Trump both before and after the election,” he says. “And is he doing a good job? Yes, he is.”

But, to his dismay, Kobach tells his audience, his home state continues to harbor illegal aliens — his preferred term for immigrants. In fact, “Kansas is the sanctuary state of the Midwest.”

It especially grates on Kobach that young undocumented immigrants — the so-called dreamers — can attend Kansas colleges and universities at in-state tuition rates if they’ve lived here for a certain number of years, attended school in Kansas and met other conditions. “We are the only state [in the Midwest] that rewards illegal immigration by giving in-state tuition to illegal aliens when our own students are barely able to afford college,” he says.

Gesturing toward his daughters, Kobach counts himself among the Kansas parents worried about paying for college. And yet the state provides “hundreds of millions of dollars in the form of legislative subsidies to illegal aliens who only have to pay one-third of the price [of tuition].”

To borrow one of Kobach’s favorite words, his argument is outrageous. Only 686 undocumented students are getting the break for in-state tuition, and most are at community colleges. They are not costing the state “hundreds of millions” in subsidies or getting a two-thirds price break on tuition. Rather, they are paying the same rates as their high school classmates. And the prohibitive tuition rates Kobach is so concerned about are a direct result of the failed tax cuts that he is promising to restore.

Without providing a breakdown, Kobach asserts that Kansas spends $424 million a year on services for illegal aliens. That’s close to the same tally contained in a 2013 report from the Federation for American Immigration Reform, a vehement anti-immigrant group that Kobach has been allied with over the years. FAIR arrived at its total by sweeping in costs for education, medical care, criminal justice and anything else it could find.

The report’s accuracy is dubious, and many of the costs laid at the feet of undocumented immigrants — including education — can’t be undone by state action. But when he is governor, Kobach tells his followers, there will be no more “welfare” for “illegal aliens.” Kansas law enforcement personnel will work hand in hand with federal immigration agents to get undocumented people out of the state. Employers will hire only U.S. citizens.

Amazingly, Kobach wraps up by telling supporters he will bring “principled idealism” back to Kansas. This he defines as “idealism that treats every person, born and unborn, able-bodied and disabled, young and old, rich and poor, equally … as a valued creation of the almighty God.”

Unless, that is, one of God’s children arrives in Kansas as an undocumented immigrant, in which case said sacred creation will be treated as a menace to be eradicated.

To sum up, Kobach’s campaign platform consists of restoring the tax-cut yoke that the Kansas Legislature just managed to shake off, reducing the budget by waiting for baby boomers to retire, running out veteran lawmakers with term limits, and cleansing the state of illegal immigrants. Not exactly the stuff of greatness. In fact, except for some savings of postage stamps, Kobach’s speech didn’t include a single workable idea. His platform, like his résumé, is hateful and craven.

It’s comforting to speculate that Kansas voters will reject Kobach’s attempt to convert their state into an impoverished wasteland where immigrants would be unwelcome — and probably wouldn’t want to live anyway. But these same voters gave Brownback a second chance in 2014, when it was clear the sun wasn’t shining in Kansas, as the governor claimed. And Kobach has won his secretary of state races by big margins in two election cycles.

Kobach is already out with a professionally prepared video introducing his family and himself. “Kris Kobach has always run toward the problem, never away from it,” a narrator says. “He’s always taken action, always led, never given up.”

Now we see an action shot of Kobach splitting wood. He raises a hatchet above his head. “Sure, sometimes he shakes things up a bit,” the narrator intones. Kobach lowers the hatchet, splitting a log down the middle. “But isn’t that what Topeka needs?” the narrator asks.