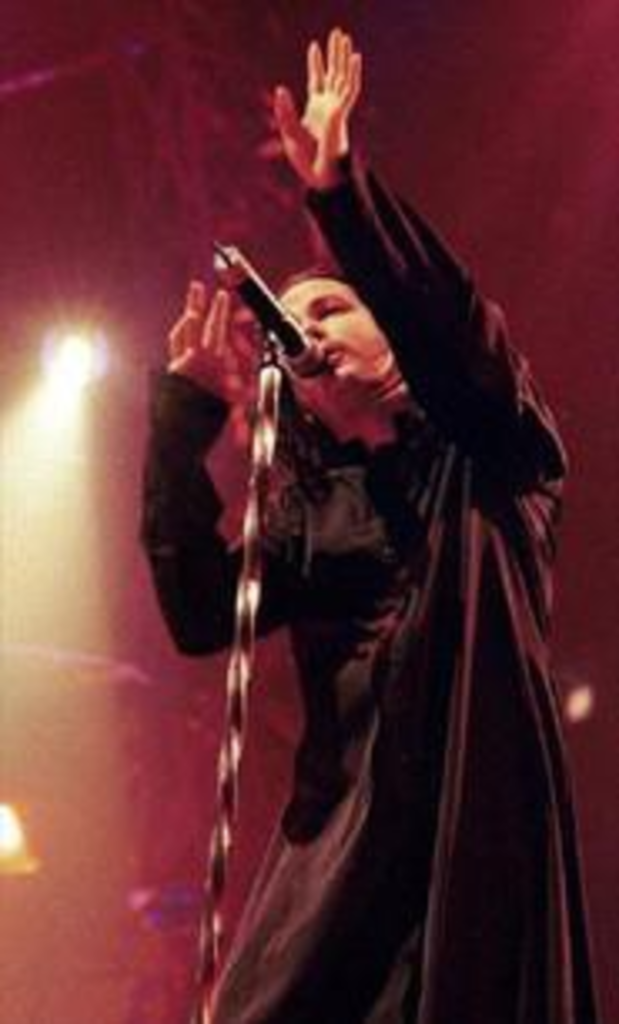 On my way into Kemper Arena to witness KoRn‘s performance Wednesday night, I passed a guy who was asking everyone he passed, “Could you please show me the way to God?” as if God were in the details of this sick and twisted show. It’s doubtful that the Almighty would sanction this sort of event, seeing that the majority of those in attendance came to raise hell, or at least to flash the universal devil sign to their equally stoned brethren across the arena floor.

Despite the religiously challenged environment (the group later performed an instrumental rendition of Slayer’s “South of Heaven”), fans and bands alike miraculously managed to raise the roof of Kemper to a biblical and previously incomprehensible level. KoRn itself actually took a break midset to have Staind, one of its two amazing opening acts, come out and cover one of the songs from its sophomore album, Life Is Peachy, giving the second-billed band an opportunity to take advantage of the Guinness Book of World Records-recognized loudest sound system on earth.

KoRn kicked open its fiery set with its most recent hit single, “Falling Away From Me,” then introduced actual pyrotechnics in the form of artful flaming torches that were placed all over the gothic-tinged set. Somehow, the band managed to keep building the intensity of its nearly two-hour show with every song. The entire night seemed to be a cleansing experience, as those in the hyper-driven pit and those surrounding the stage in seats never sat down or slowed down while singing along to nearly every song with religious fervor. From a band with some overwhelmingly fatalistic lyrical content, the mood generated by this performance was life-affirming, as if the musicians and the fans were simultaneously purging themselves of their demons through song.

Despite the negative connotations associated with the rap/metal genre and the blame game the Woodstock fiasco placed upon KoRn and its musically aggressive brethren, the entire evening was more of a positive release of negative energy and less of the drunken hateful fistfight-filled spectacle skeptics might have expected. Coming on the cusp of two horrific anniversaries as this show did (Oklahoma City Bombing, April 19th; Columbine Massacre, April 20th), it was promising to see America’s youth channeling its energy in catharsis, not car bombing.

KoRn’s down-tuned numbers for the downtrodden masses never seemed more all-consuming than when the group broke out its hits. Songs such as “A.D.I.D.A.S.,” “Got The Life,” and show-closing number “Blind” became much more than depressing metal tunes as a sea of swaying and slamming survivors shouted along, feeling every single emotion, meaning every single word. Very few bands can make an arena show that intimate, that personal. It’s a true testament to the power of KoRn.

When the band’s fantastic set finally ended, a mass of sweaty, spent youth climbed the stairways and headed slowly toward the exits, carefully savoring the night’s entertainment. Even though most were smarting and bruised from what outsiders would likely consider mortal combat, most of the wounded were still smiling, singing, and praising their rock and roll messiahs.

Staind turned in an interesting performance as well, although its stage presence differed greatly from its club-torching turn at The Bottleneck in October. The band seemed rather lifeless on Kemper’s oversize stage, as if it were feeling out of place. Singer Aaron Lewis writhed away on the floor, looking as though he was feeling under the weather. He hit all the notes perfectly and belched all the hellfire, but it was as if his amazing voice came to town and left his lifeless body at the baggage claim. Still, it was impressive to see Lewis deliver his vocals with unwavering strength even during his brave venture into the pit, where it looked as though the crazed fans surrounding them were actually zombies were rising from their graves in search of yummy brains a la George Romero’s Night Of The Living Dead.

Although it didn’t catch Staind at its most energetic, at least a majority of the audience got to see the Boston-based group. Industrial supergroup Mindless Self Indulgence wasn’t so lucky. The printed time on the concert tickets said 7:30 p.m., but the show actually started earlier than that, with Mindless Self Indulgence (a late add to the bill) going on at 6:45. This meant that a great many people, myself included, were denied the opportunity to see whether this squad could re-create the hyperactive techno-thrash of its debut album, Frankenstein Girls Will Seem Strangely Sexy, in a live setting.