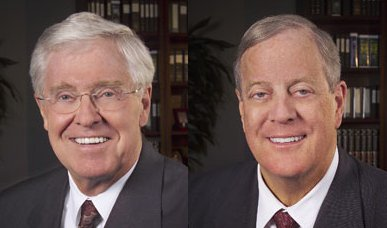 Swampdrainer-in-chief Donald Trump is set to shake things up in Washington come January 20. You’re not gonna believe how lacking in moisture this swamp will be. Very dry!

The Center for American Progress has been monitoring not just Trump’s high-level cabinet picks, but also whom has been chosen to serve beneath them in various federal agencies.

CAP’s finding is that roughly a third of the individuals so far appointed to serve in the Trump administration have ties to entities bankrolled by Kansas billionaires Charles and David Koch. Though the Kochtopus — Kochtrumpus? — was not an enthusiastic supporter of Trump’s candidacy, its tentacles are long and strong enough that it is a virtual certainty that its secretive network of conservative institutions will enjoy tremendous influence in Washington over the next four years.

Close to home is Kansas Congressman Mike Pompeo, who has been selected by Trump to run the CIA. Pompeo received more money from Koch Industries than any other politician in the country when he first ran for Congress in 2010. The Kochs were also investors in Pompeo’s aerospace company.

Other names include Myron Ebell, a climate-change denier appointed to lead Trump’s Environmental Protection Agency transition team. Ebell is the director of the Competitive Enterprise Institute, which is funded by the Kochs. Just about everyone tapped to serve in the EPA so far is somehow Koch-affiliated, CAP’s research found. Thomas Pyle, the guy who is leading the transition team for the Department of Energy, has very deep ties to the Kochs.

You can peruse the report’s findings here.

Also, this happened about five months ago: