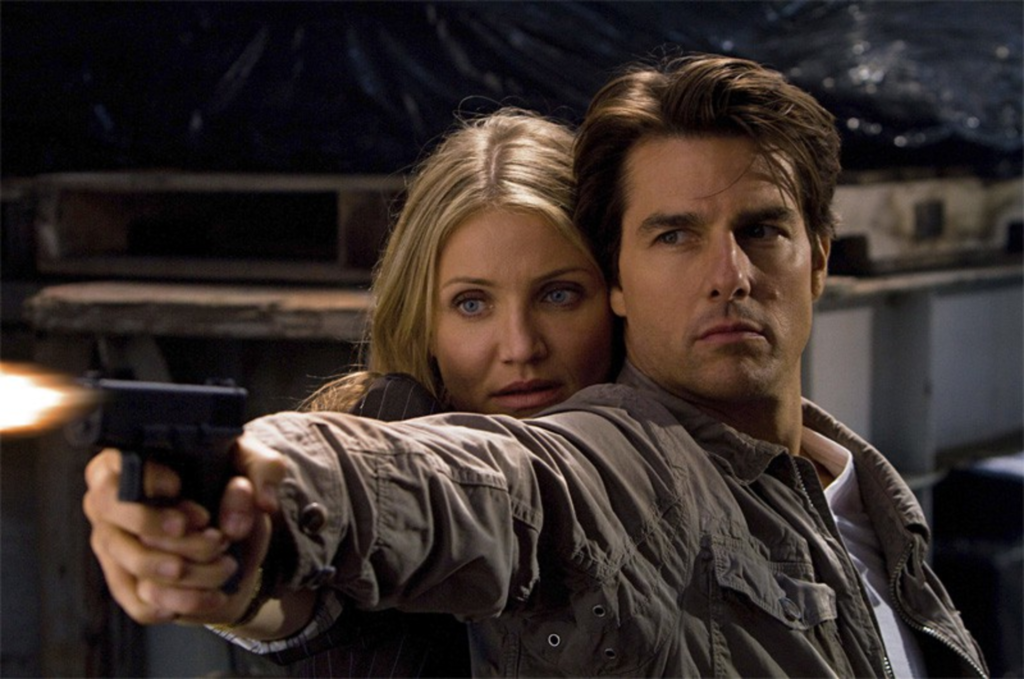 You know and love Jason Bourne as an implacable killing machine. But what if he were a mouthy asshole instead? That’s the provocative question posed by James Mangold’s Knight and Day, which casts Tom Cruise as a Bourne wannabe who seriously can’t shut up.

As Roy Miller, an agent gone rogue from the FBI or the NSA or the CIA or whatever-the-fuck, Cruise never stops flapping his gums. Fighting a dozen guys at a time? He yammers on through it. Hanging upside down and shirtless in a torture chamber? He has something to say about that. Falling from a great height onto the windshield of a speeding car? Funny story he’d like to tell you.

He’s just so irritating, each subpar quip delivered with a cocksure grin that makes you wish the bad guys were better at hitting back. Or, really, it’s Tom Cruise who’s irritating — those are his terrifyingly pearly whites, of course. There’s never been a particularly crisp line between intense, super-awesome Tom Cruise and the characters he plays. In Knight and Day, his age-old cool curdles into a needy motormouth. Approaching 50, he suddenly seems desperate for our love. (See: Untitled Les Grossman Project.)

The love that Roy Miller is angling for is that of plucky June Havens (Cameron Diaz), whom Roy runs into — literally — in the Wichita airport. He’s handsome enough, and she’s apparently on the prowl. Their flight to Boston is filled with torrid flirting and enemy agents. One unconvincingly filmed plane crash later, the two are on the run, with explosions, gunplay and spycraft provoking an awakening in June’s soul, just like in The Awakening, one of this movie’s clear inspirations. It turns out that, under her staid exterior, June has always craved adventure. Soon, she’s straddling Tom Cruise on a motorcycle, an automatic in each hand, blowing holes in bad guys like a pro.

The plot, such as it is, revolves around the hunt for precocious scientist Simon Feck (Paul Dano), who has invented a perpetual-energy battery. A Spanish arms dealer wants it, and someone dirty inside the National Bureau of Security Intelligence wants to sell it to him. All that stands between this Spanish arms dealer and the MacGuffin he so dearly desires is Roy Miller.

Or is Roy the crooked agent? Hahaha, have you never seen a movie before? The crooked agent is exactly who you think it is the whole time, one of a slumming-it supporting cast that includes Peter Sarsgaard, Viola Davis, Marc Blucas and Maggie Grace.

And so the movie zips from America to the Azores to Austria to Spain, alternating between wan Cruise-Diaz banter and incoherent gunfights. (Knight and Day, with its frenetic cutting and cheap-looking effects, confirms that James Mangold — he of Walk the Line and Kate & Leopold — is not much of an action director.) In the end, you may wonder if the makers of this hyperactive, joyless thriller didn’t stumble upon a perpetual-energy battery themselves — and not for the good: Knight and Day keeps going and going and going.