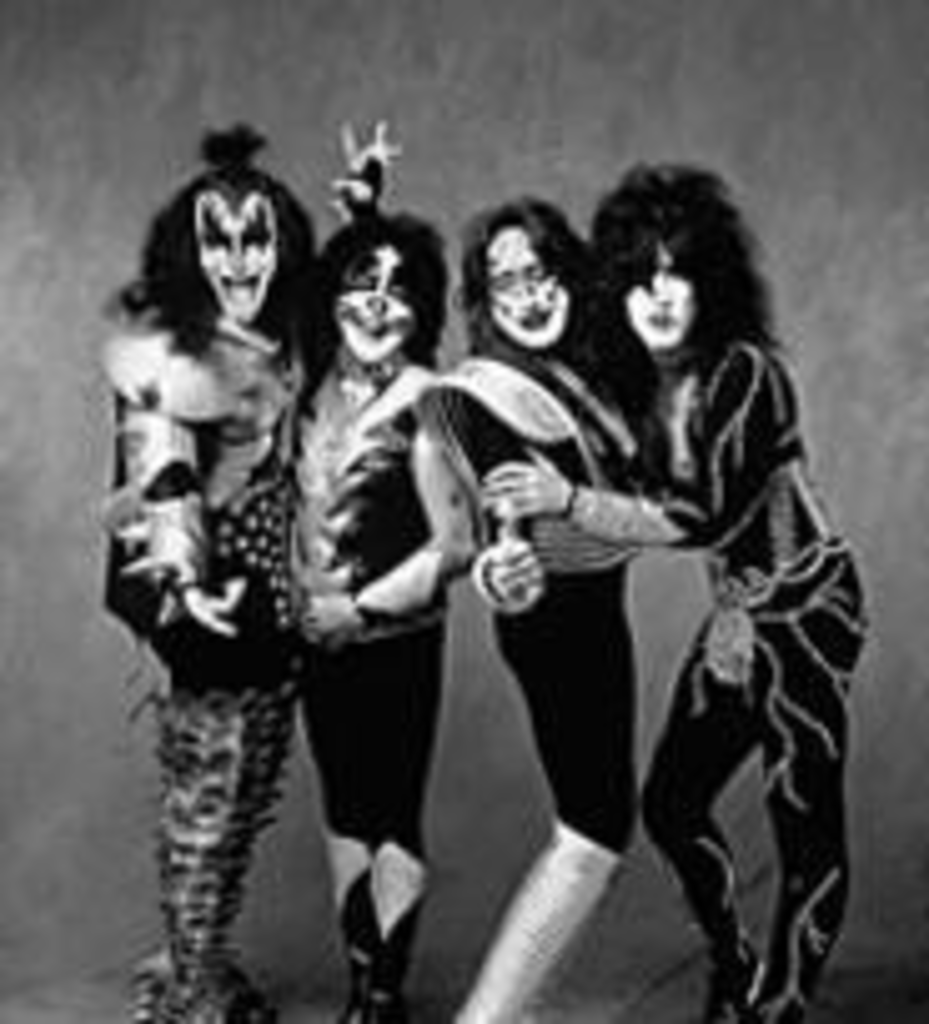 It’s not easy being a Kiss fan, even a reformed one.

I haven’t been able to stomach the self-proclaimed “hottest band in the world” for years. I still cringe every time it hawks another overpriced trinket or embarks on its annual farewell tour. It’s almost too tough to bear.

So what the hell happened?

Kiss was the first concert I ever attended: second grade, 1979, Dynasty tour, original four members. Judas Priest opened. Kiss rose from under the stage in clouds of colored smoke — red for Gene Simmons, blue for Ace Frehley, etc. Gene spat blood, breathed fire and flew up into the rafters for one tune. Ace played his smoking Gibson, and Paul Stanley shouted, “We love you!” so many times that we actually began to believe him. It was probably the greatest night of my young life.

I was hooked. Within a week, I enlisted in the Kiss Army. The amount of swag you got for $5 back then was astounding: posters, stickers, decals, trading cards, you name it. Before long, my bedroom was awash in Kiss merch. Posters everywhere, Kiss action figures, the Destroyer puzzle, a Love Gun belt buckle, comic books and an embarrassing stack of 16 magazines. I took my PB’n’Js to school in a Kiss lunch box.

And did I save any of it? Of course not. I’d be in Hawaii right now living off my eBay earnings if I had.

I also owned most of the albums, but they ranked a distant second to all the neat stuff. It didn’t matter that the music wasn’t that great or that all the bad double entendres fell flat on my 7-year-old ears. Christine Sixteen was a little old lady from my vantage point. And why would Gene want to meet anyone in the ladies’ room?

In fifth grade, I discovered the Beatles and went permanently AWOL from the Kiss Army. I saw just one more Kiss concert, on one of the early-’80s tours when the band had fully embraced spandex. Kiss played the same old songs, and even Paul’s stage patter hadn’t changed one bit. I got free tickets and still felt ripped off.

In hindsight, it’s easy to see the band’s pattern of giving Kiss fans less than their money’s worth. The Alive album was a studio fabrication. Ace’s latter-day guitar solos were actually the work of hired hands. There was that string of bad Gene Simmons flicks. Tongue magazine. The logo-emblazoned coffin that doubles as a beer cooler.

Today, Kiss has become the worst possible parody of itself, a traveling Vegas act located at the intersection of nostalgia and bloated bombast. The band’s contempt for its audience is palpable. Simmons smirks about ripping off Kiss fans in his books, which, of course, are purchased solely by Kiss fans.

This isn’t merchandising — it’s meta-merchandising. The Kiss online store features a stunning array of products; it makes Insane Clown Posse’s setup look like a Kool-Aid stand. There are $750 “premium gold edition” boxed sets, $800 casino chips, and Gene Simmons Underoos. And yes, you can still buy a Kiss lunch box, except now there are four to choose from.

When a band gets this absurd, it’s hard to list every wince-inducing moment, but some lowlights stand out from the rest. As part of my ongoing therapy, then, here are the ten worst moments in Kisstory.

10. The much-hyped unmasking One look at Simmons and it was obvious why they’d gone with full face paint in the first place.

9. “I Was Made for Loving You” Kiss meets the phantom of the Bee Gees.

8. The long good-bye Kiss played its first farewell tour eight years ago. Since then, the band has been busy — busy touring, that is. Last year, it played arenas with Aerosmith. This summer, it’s hitting the sheds with Poison. Can an outing with White Lion be far off?

7. Very Best of the Greatest Hits Live In August, Kiss will release Kiss Gold, its umpteenth compilation of vintage material. Apparently Double Platinum, The Very Best of Kiss, The Millennium Collection, Smashes Thrashes and Hits, Greatest Kiss, and Kiss Killers just weren’t enough. They should have called it Kiss Old.

6. The impostors The current Kiss tour features four members in original costume and makeup. But the guys sporting Ace’s and Peter’s gear are robotic, salaried replacements. Hey, wasn’t that the plot of Kiss Meets the Phantom of the Park?

5. Music From The Elder’ The members of Kiss attempted to become serious artists when they hired knob twister Bob Ezrin, hot off producing Pink Floyd’s The Wall. The resulting ill-conceived concept album was more like the Ishtar of heavy metal — if Ishtar had starred Jewish guys in makeup singing songs about a boy with mysterious superpowers who battles to save the world.

4. Paul Stanley stars in The Phantom of the Opera A poor attempt at deflecting the rumors that he “likes show tunes.”

3. The $1,000 backstage pass Wanna meet Tommy Thayer, the ex-guitar tech who now poses in Ace’s costume and makeup? For a mere grand, you can snag the “Platinum Ticket Package,” which includes a seat in the first two rows and a “band experience with photo.” According to rules posted on the Kiss Web site, fans get only one photo, and it must be taken with the band’s camera. Sounds like a real fun time. Whatever happened to the good old days, when you could get backstage if your girlfriend blew a roadie?

2. Kiss Kondoms You’ll need one of these for your “band experience.” Varieties include “tongue lubricated Gene” and “studded Paul.” Yeech. Really the lowest point in the history of rock merchandising. Makes the coffin seem tasteful by comparison.

1. The Pepsi commercial Stanley and Simmons harmonize Pepsi’s theme song, “The Joy of Cola,” and unintentionally encapsulate everything Kiss Inc. is all about. That song oughta be on Kiss Gold.