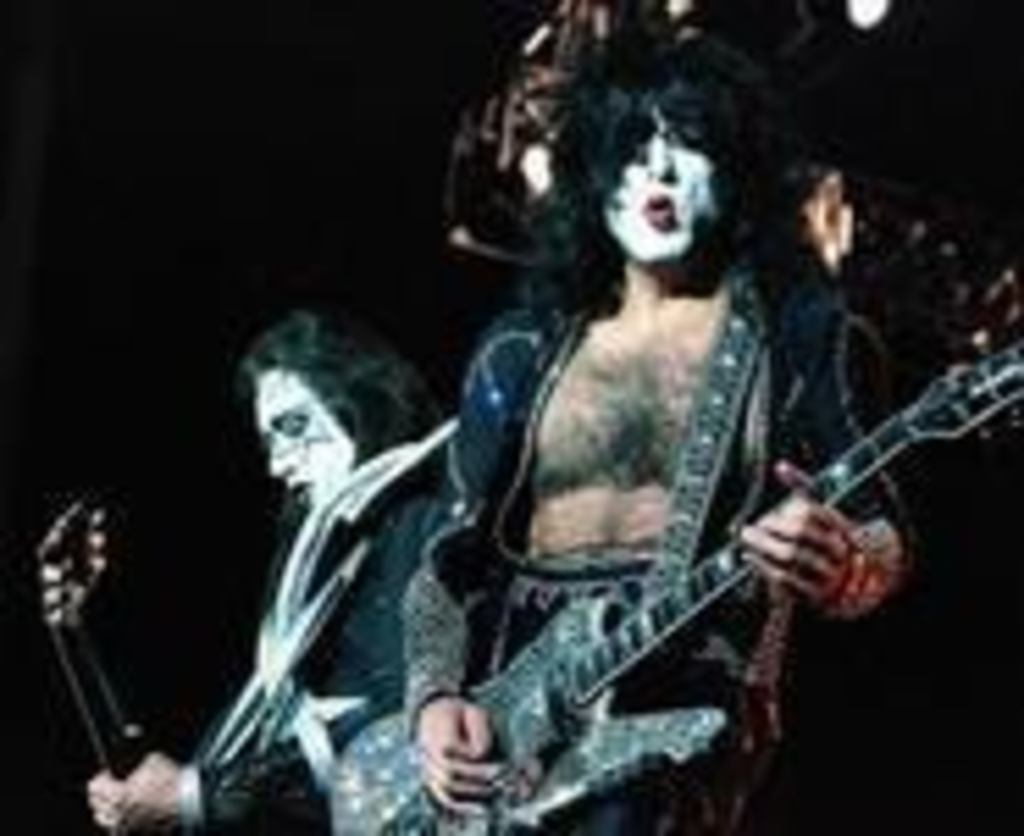 Musically, Kiss was off Friday night. Gene Simmons couldn’t hit his notes with Ace Frehley’s fireball-shooting guitar, Peter Criss was lethargic behind his kit, and songs such as “Heaven’s on Fire” were scarcely recognizable. None of this seemed to matter to the latest incarnation of the Kiss army, who came for the spectacle and didn’t go away disappointed. As always, the group opened with the declaration “You wanted the best; you got the best,” and in terms of showmanship, it delivered as advertised.

After descending from the ceiling on a platform in full costume and makeup, Kiss kicked into a rollicking version of “Detroit Rock City.” Simmons, wearing a cumbersome metal-and-spikes ensemble, starting sweating away his face paint almost immediately, while lead guitarist Frehley resembled a space-age version of the Pulp Fiction gimp. Criss and Paul Stanley went shirtless, which was flattering for the latter. As for the flabby Criss, he at least was well concealed behind his drumset.

Soon, the real fun began. Stanley played the guitar behind his back while thrusting his pelvis, then joined Simmons, who took a break from wagging his tongue for the cameras, and Frehley for some snazzy choreographed moves and synchronized rocking of their instruments. When the trio split, Simmons prowled the stage with an intimidating stomp, while Stanley followed a series of balletic jumps with some vigorous butt-wiggling, and Frehley played dazzling solos while standing as if his kneecaps were glued together and holding the guitar in various phallic poses. This marked the “loud” portion of the show, as “Shout It Out Loud” merged into “I Love It Loud,” and the volume matched the sentiments expressed.

The focus briefly left the musicians on stage during “Do You Love Me?,” which featured a retrospective video on the group’s career on the massive video screen behind them. At times, this seemed a tad disingenuous, as much of the footage shown was much more over-the-top than the band’s current antics, but all was forgiven when Stanley sweetly informed the crowd, “We love you, Kansas City!”

Stanley’s affection for Kiss’ adoring fans seemed genuine, as much of his stage banter consisted of the singer showering the audience with congratulations and compliments (“Look at yourselves — you’re beautiful!”). Even when the crowd wasn’t as rowdy as he would have liked, he didn’t spur them to action with insults, as new-metal groups are wont to do, but instead prodded them with lines such as, “That was great, but if you could yell a little louder, that would be awesome.” Stanley did throw in one “Take that, critics” rant that pointed out how Kiss has been left for dead by the press many times in its 26-year history, and he occasionally delivered instructions (“Clap your hands!”) in operatic soprano. Finally, during “Love Gun,” Stanley rode a pulley-driven system from the stage into the middle of the crowd, soaring just a few feet above concertgoers’ heads before landing and belting out the tune while the rest of the band carried on virtually unwatched.

However, each member had his moment in the spotlight. All eyes were on Criss as he crooned the ballad “Beth.” Simmons, who if multiple banners were to be believed was celebrating his birthday, performed an abstract bass solo and, more important, spat the contents of a cup filled with blood-red liquid onto the stage. And in the highlight of the evening, Frehley unleashed a series of shredding solos, shot balls of flame roman candle-style at two glowing globes on either side of the stage, and finally continued playing his guitar after it burst into flames, fingering intricately as smoke billowed from his instrument.

Stanley promised the crowd, “We’ll stay as long as you will,” but after a set that extended past the two-hour mark, Kiss said its final farewells, even though there were doubtlessly some in the crowd who, to quote the closing tune, wanted to rock ‘n’ roll all night instead of going home a little after midnight. Still, the cheering crowd looked to have few complaints about set length or sour notes. The Kiss army left knowing that its heroes were still capable of offering some of the finest cinematic rock entertainment around, and those who never went to a Kiss concert, even those who hated the group’s music, might feel a twinge of regret when they hear/read accounts of the band’s fittingly bombastic Kiss goodbye.