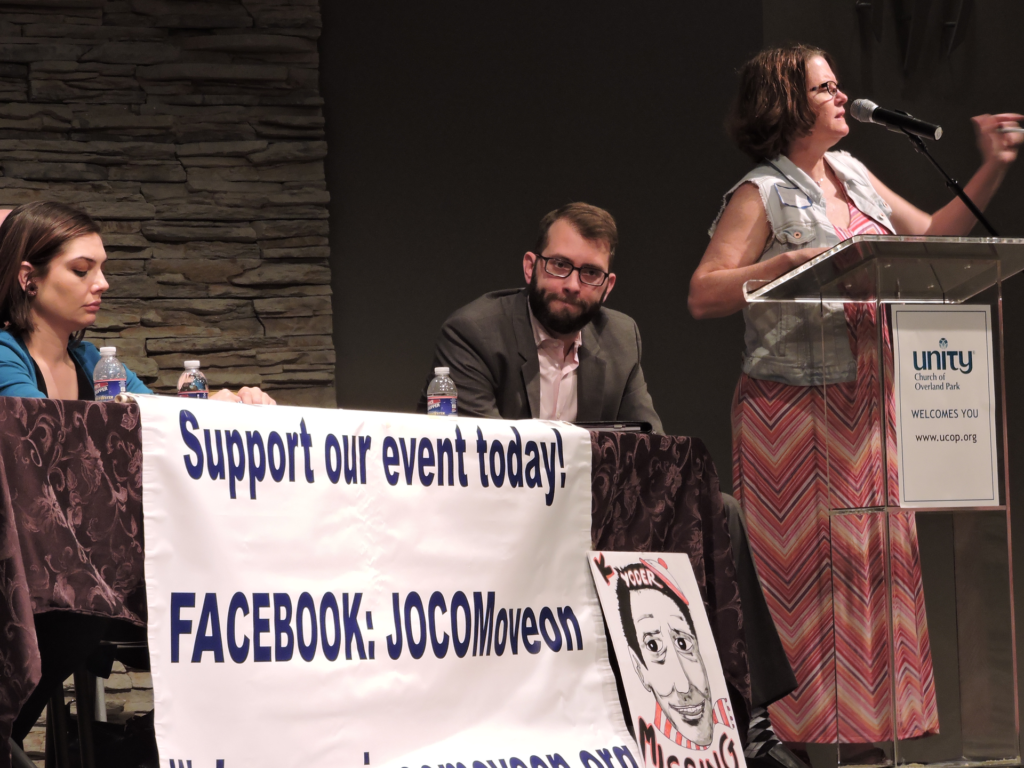 How might U.S. Rep. Kevin Yoder vote today on the revised GOP healthcare bill? He hasn’t said. Hey, he absolutely voted yes! But that’s no surprise — the man hasn’t revealed himself, or his positions, much lately.

The congressman could have attended a recent town hall meeting called in his honor, for instance, but then he would have deprived a crowd of nearly 400 the opportunity to snicker at his absence. Yoder had been been dodging gatherings where rabble rousers might be present, and this one fit the bill. So organizers propped a cartoonish mug of their Republican congressman at the foot of the speakers’ table and carried on without him.

By being a no-show at what organizers called a “town hall for Kevin Yoder,” at an Overland Park church, the politician at least provided certainty. The audience didn’t need to investigate which Yoder had appeared in their midst — the reassuring moderate Republican, the tea party conservative, some new hybrid version.

And the Yoder-less town hall stood head and shoulders above the “telephone town hall” that the man himself had staged the evening before. The faceless congressman had blandly droned on about the drawbacks of Obamacare and “European health care,” and talked up his chairmanship of Congress’ “civility caucus.” It was, by design, a snooze of an event; everyone but Yoder could hear the collective eye-rolling.

There’s about to be more noise than that. It’s safe to say that interest in Yoder is at an all-time high. Hillary Clinton beat Donald Trump in his congressional district in November, and Democrats in Kansas and Washington have announced that it’s game on come 2018.

Key to that effort is David Miranda, a veteran of numerous campaigns, most recently the successful effort to oust North Carolina’s GOP governor, Pat McCrory. Now the Kansas Democratic Party’s 3rd Congressional District director, Miranda brings a welcome savvy to a party that has stumbled for years in Kansas. He entertained the town hall crowd with a sharp summary of Yoder’s penchant for talking one way and voting another.

“Yoder has no core beliefs or values,” Miranda said. “Yoder cares about Yoder.”

But, as thrilling as it is for progressives to contemplate a coup, Yoder’s political obituary is premature. His district still leans red — deeply so in areas such as Olathe. Its bluest pockets in Wyandotte County do a poor job of turning out voters. And the superstar candidate required for Democrats to oust a well-financed GOP incumbent has so far not materialized. (Jay Sidie, the little-known opponent who pulled a disappearing act in the crucial days before last year’s election, would best serve his party by remaining invisible.)

For now, there is at least fun to be had watching Yoder squirm. After years of demoralized torpor, Democrats and moderate Republicans in Yoder’s district have roared to life, seeking to affect what’s going on in Topeka and Washington. At least half a dozen groups in Johnson County are busy recruiting candidates, raising money and providing a steady pipeline of “resistance” opportunities, including weekly gatherings in front of Yoder’s Overland Park office.

I visited there on a recent Tuesday and found about 30 senior citizens amiably holding signs and waving to motorists, who honked in solidarity. A few more folks were inside, talking with Yoder’s staff. If not exactly a show of force, it was at least a message that some constituents are wise to their congressman.

“My impression is, he’s a mugwump,” said Ardie Davis, who is best known around these parts as a barbecue aficionado. “He tests the wind, and his mug is on one side of the fence and his rump is on the other.”

That’s a more colorful version of Miranda’s point. Yoder’s one guiding compass is his desire to prolong and advance his political career. Lacking true colors, he is the most accomplished chameleon in Kansas politics.

Back in the day, as a political science student at the University of Kansas, Yoder served as a Democratic Party intern. Fast forward a few years and here he is, a practicing lawyer living in Overland Park, running for the Kansas Legislature as a moderate Republican. Pause the highlights reel at 2010 and we find Yoder parroting the tea-party line as he tops a crowded field to become the GOP’s nominee for the open 3rd District Congressional seat, which he goes on to win.

Early in his congressional career, Yoder told journalists and others that he needed to establish his conservative credentials in order to ward off a primary challenge from the right. His unspoken message to moderates: Bear with me — I’ll come home to you when it’s safe.

Yoder spent his first three terms in office voting for every “repeal and replace” measure the GOP put forth to discredit Obamacare. He voted twice to shut down the government and sponsored an amendment that rolled back an essential protection of the 2010 Dodd Frank law to rein in Wall Street and the big banks. He took thousands of dollars in campaign contributions from payday lenders and fought the Obama administration’s effort to check the worst of their abuses.

At the same time, Yoder has always taken pains to link himself to a cause or two that progressives in his district will appreciate — more funding for medical research, for instance. While moderate Republicans in Johnson County have turned on GOP Gov. Sam Brownback and some conservative state lawmakers with a vengeance, they have mostly remained loyal to Yoder.

“He has good personal relationships with moderates,” says Stephanie Sharp, who helps run campaigns for moderate Republicans seeking legislative seats. “He works on that.”

Schmooze the moderates, vote alongside the conservatives. So far, it has worked. But, as Yoder’s remarkable ability to adapt to the political environment is being tested, his political pigment is transforming before our eyes. After years of churning out falsehoods about the evils of Obamacare, he suddenly couldn’t decide whether he approved of U.S. House Speaker Paul Ryan’s replacement plan — the one that went up in flames almost as soon as it was exposed to the open air.

Yoder also ostentatiously broke ranks with his party and voted against a recent bill that allows Internet providers to mine and sell the online history of users. That earned him a laudatory editorial in The Kansas City Star, which asserted that Yoder had “resisted playing party politics and instead tried to do right for his constituents.” The newspaper failed to note that this show of independence was a blip. Before this year, Yoder had voted with his party 97 percent of the time.

Yoder has assiduously courted conservatives in his district, and can probably get away with a pivot toward the middle. “I’m not really too worried about where he is right now,” says Greg Cromer, chairman of the Conservative Republicans of Southern Johnson County. “I feel pretty confident that he’ll represent the district the way it needs to be represented.”

A statewide run — perhaps for governor next year — would present a more challenging political calculus. Yoder would need to position himself as conservative enough to win a Republican primary, then swing to the middle to attract enough votes from an electorate fed up with what conservative Republican governance has done to Kansas.

It’s a tough sell, even for a quick-change artist. And Yoder isn’t fooling many people anymore, even in his own party. “As good as he is at community service, he comes off as disingenuous and inauthentic,” says a politically active Republican who counts Yoder as a friend.

That’s the thing about being a chameleon. Once predators catch on to the disguise, all defenses are gone. Yoder is looking more exposed by the day.