Missouri Supreme Court set oral arguments on motions for Nov. 28 ― the day before Johnson is scheduled to be executed. 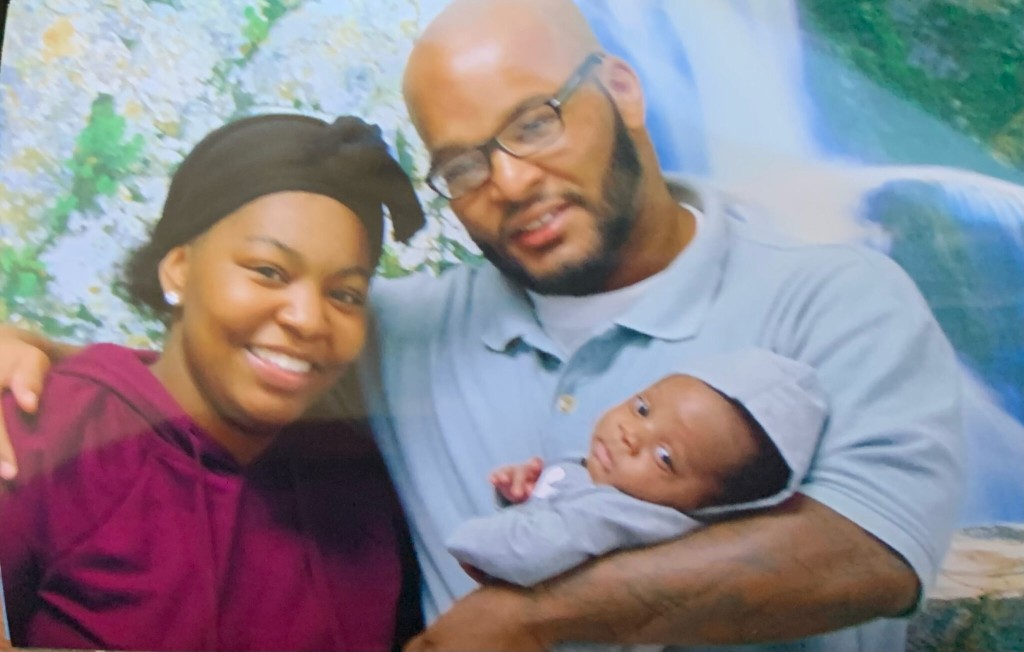 Kevin Johnson Jr. with his daughter, Corionsa Ramey, and his grandson. // Courtesy of the ACLU of Missouri

Attorneys for a St. Louis man sentenced to die for a murder he committed when he was 19 asked the Missouri Supreme Court Monday to delay his execution to allow for a hearing on alleged constitutional violations in his original trial.

Kevin Johnson was convicted in 2007 of killing a police officer. He is scheduled to be executed on Nov. 29, but his attorneys are hoping for a stay based on a state law enacted last year giving prosecutors the authority to file motions to set aside convictions in cases where a person may be innocent or may have been erroneously convicted.

Once the motions are filed, judges are required by law to hold hearings to review the evidence.

On Nov. 15, Keenan filed a motion to set aside Johnson’s judgment.

The next day, St. Louis County Presiding Judge Mary Elizabeth Ott, who had appointed Keenan to review the case, denied the motion without holding a hearing. With only six working days before Johnson’s execution, she said the motion put the court in “untenable position.”

State law requires a hearing, Ott wrote in a Nov. 19 order, but the court “is also aware of the requirement that sufficient time for all parties to prepare and present evidence at such hearing is essential to its proper function.”

Now there’s only three business days before Johnson is executed. Johnson’s attorneys hope the Missouri Supreme Court will grant a stay to allow the process outlined in the state law to play out.

“Our position is that she should have held a hearing,” said Johnson’s attorney, Shawn Nolan, “and that she does have jurisdiction. And so we’re hopeful that the Missouri Supreme Court will tell her that.”

Keenan filed his own motion to stay the execution later on Monday.

The Missouri Supreme Court set oral arguments on both Keenan’s and Johnson’s attorneys’ motions for the afternoon of Nov. 28, just a day before the execution is set to take place.

When Johnson was 19, he was charged with first degree murder for the killing of Sgt. William McEntee of the Kirkwood Police Department on July 5, 2005. The first trial ended when the jury deadlocked 10-2 in favor of a conviction on the lesser offense of second degree murder. However, a second jury convicted Johnson of first degree murder and sentenced him to death in 2007.

Johnson admitted to killing McEntee, who Johnson believed had been involved in the death of his then 12-year-old brother.

Keenan called the crime “horrific,” but argues Johnson may not have received the death penalty in a fair setting.

“Mr. McEntee’s family, the law enforcement community, and the community deserve justice,” Keenan wrote. “Unfortunately, the original prosecuting attorney did not pursue that justice according to law. The law requires this court to vacate the judgment and order a new trial that adheres to constitutional standards.”

After being denied relief at every available avenue, Johnson’s hopes were renewed when legislators passed the 2021 law.

Johnson’s former defender is now part of Bell’s conviction review unit, creating a conflict of interest, so they asked the court to appoint a special prosecutor.

In her order, Ott said she found it “disconcerting”​​ that Bell’s office didn’t request a special prosecutor until October.

In Johnson’s Monday motion to stay the execution, it says Bell’s team wrote to the Missouri Supreme Court in July asking it not to set an execution date because Bell’s team was reviewing Johnson’s case and looking for an eligible special prosecutor.

In August, the court set the execution date regardless.

While Keenan only had a month to review the case, he says he found discrimination in McCulloch’s prosecution practices.

“In deciding whether to grant a stay, this court should consider the special prosecutor’s motion to vacate for what it is: The state’s confession of error,” Johnson’s attorneys state in Monday’s motion to stay the execution.

“Through the special prosecutor, the state admits long-standing and pervasive racial bias in St. Louis County’s handling of this case and other death-eligible prosecutions, including the office’s decisions of which offense to charge, which penalty to seek, and which jurors to strike.”

Of the five police-officer killings McCulloch prosecuted during his tenure, Kennan found that McCulloch pursued the death penalty against four Black defendants but not against the one White defendant, Trenton Forster.

As compared to the other cases, “Forster’s conduct was more aggravated: He had bragged on social media about wanting to kill police officers.”

In the Forster case, McCulloch’s office “issued a written invitation to defense counsel to submit mitigating evidence that might convince the prosecutor’s office not to seek death,” then “granted the defense nearly a year to provide arguments against death,” Keenan found.

McCulloch ultimately decided not to seek death against Forster, without giving any specific explanation why, the Monday motion states. By contrast, McCulloch issued no such “mitigation-invitation” to Johnson or other Black defendants who stood accused of killing police officers.

Ott said many of the claims raised in Keenan’s motion are rehashed arguments previously raised and rejected in state and federal appellate courts.

However, Johnson’s attorneys argue that the special prosecutor discovered an “incriminating memorandum” from the trial team’s materials, showing the prosecutors strategized in advance of the trial on ways to get Black jurors stricken by the trial judge.

Keenan also pointed to a comprehensive study of 408 St. Louis County death-eligible homicide prosecutions during McCulloch’s tenure demonstrates that the prosecutor’s office “largely reserved the death penalty for defendants whose victims were White when deciding whether to charge first degree murder and to seek the death.”

While Keenan argues he’ll successfully prove discrimination impacted Johnson’s fate if given a hearing, Ott hinted at how that proceeding might go in her courtroom.

At the end of her Nov. 19 order, she says the new state law “requires something more than the rearticulation of previously litigated claims at the eleventh hour.”