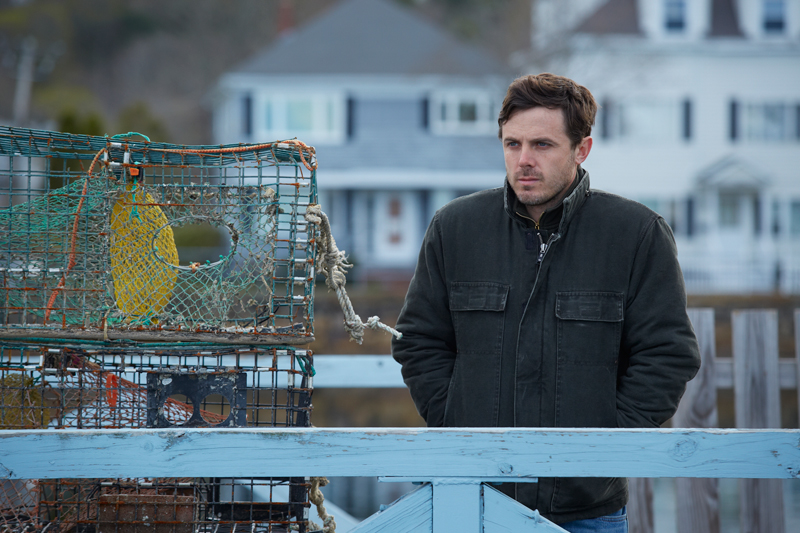 Although it is set among a group of working-class friends and family in a small Massachusetts fishing town, the third movie from writer-director Kenneth Lonergan in 17 years is an epic. It’s not monumental in the traditional way — with sweeping landscape shots or complicated set pieces featuring scores of costumed extras — but rather in its wide scope of intimate feelings and complex truths.

What’s all the more remarkable is that Manchester by the Sea accomplishes this feat without the benefit of articulate characters. The messy emotional weight of the movie is expressed exquisitely by Lonergan’s filmmaking choices. He lets the drama be, embraces the mundane and pays tactical attention to the details.

The movie is held together by an inward-looking performance by Casey Affleck, who surpasses the promise he showed in The Assassination of Jesse James by the Coward Robert Ford and Ain’t Them Bodies Saints. Affleck plays a handyman of few words named Lee. Living in a dingy basement apartment in a Boston suburb, he is disconnected from the world — and we get the feeling that’s exactly how he likes it. But his laconic attitude masks a hair-trigger rage that comes out in a bar fight.

When he gets a call that his older brother, Joe (Kyle Chandler, in flashbacks), has died, it’s not a shock. He seems detached as he travels to his overcast hometown of Manchester by the Sea, going about the business of tying up his brother’s loose ends. Joe had a heart condition, and Lee was prepared for his death. But he wasn’t expecting to get guardianship of Joe’s son, Patrick. He was closer to his nephew when he was a young kid, but the teenager (Lucas Hedges) is prickly now and has a rich high school life.

It’s this life-altering burden for Lee that provides Lonergan’s dramatic throughline. Joe’s decision may have been made to help his deeply wounded brother heal, but all it’s really doing is giving him a new reason to stress out. Manchester by the Sea is about facing the past. There are memories that won’t stay buried, and they’re on Affleck’s face every second of the movie

Lonergan, a renowned playwright, uses a unique flashback structure that’s jarring but adheres to its own rhythm, to which you eventually adjust. There are so many flashbacks, and they seem random at first. But once you realize the blunt and strategic nature of how Lonergan is deploying these moments, the impending threat of the next flashback starts to build its own suspense. All of this happens on top of an indeterminate mystery that also gnaws at you.

As he proved in 2000’s You Can Count on Me and 2011’s Margaret, Lonergan is a master of establishing tone, especially in the wake of grief. He finds absurd humor in the everyday and revels in life’s humbling indignities — especially when they occur inside the bleakness. Even the most dramatic moments and important conversations (which would be sacrosanct in a more traditional drama) are liable to be derailed by quotidian absurdity and over-polite formality.

That means there are few smooth interactions in Manchester by the Sea. The conversations are often forced and uncomfortable, and not just because the grief-stricken Lee is half of most of them. The film avoids sentimentality not just as a general rule, but because its characters run from it.

So it follows that Lonergan avoids cheeseball shortcuts — a tough relationship suddenly fortified, deep-seated grief healed by some coincidental commonality between Lee and Patrick. The relationships here are real, and they develop with authentic slowness. Feelings that seem immovable in the moment change ever so slightly with the passage of time.

But Manchester by the Sea is not one of those slice-of-life movies that leaves you feeling like nothing actually happened. It shows you big, life-changing moments — moments of searing tragedy and quiet devastation. The most intense scene in the movie is a low-volume conversation between Lee and his ex-wife (a heartbreaking Michelle Williams); she desperately needs to talk, but Lee is equally desperate not to hear what she has to say.

Lonergan’s ear for real people and all their complexity is finely tuned. No character in the movie is defined by one simple trait, and the people he shows us sometimes behave as inexplicably as real people often do. Manchester by the Sea is the most textured, emotionally complex screenplay of the year, by some distance. Lonergan’s filmmaking redefines epic. He has found something big and universal in the small, specific characters he shows us at hauntingly close proximity.