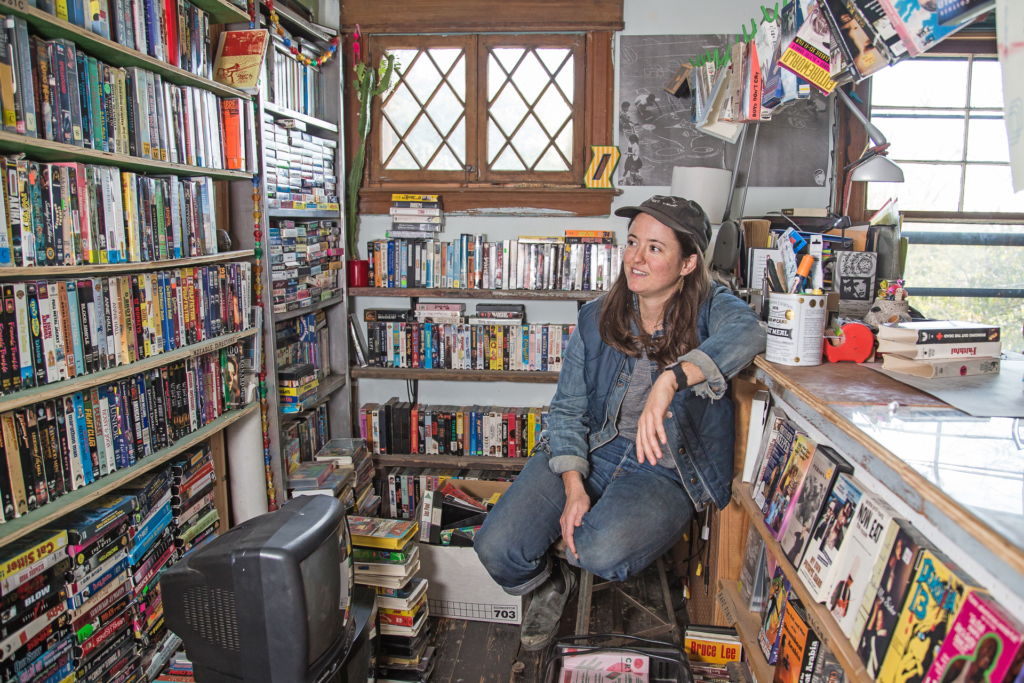 Do you remember the last time you dialed a residential landline? If your communication habits are anything like mine, it’s been, what, maybe a decade? Ten years since you had to summon an outmoded etiquette: What if she’s not home? Will there be an answering machine? When will she get the message? What if someone else — a roommate, a partner — answers?

I’d tapped out the numbers and initiated the call, but now I wondered these things. I’d seen this particular phone, could picture it sitting in the dining room of the communal house where it still ably performed its duty — a dining room being a perfectly normal and correct place to put a shared telephone connected to wiring installed at least a generation ago. And now I imagined that old device ringing, the sound echoing through someone’s house, where I enjoyed no control over who might answer. I recognized the effort I was exerting to keep from hanging up and instead sending a text.

Kendell Harbin answered on the third ring, her voice sounding something less than crisp on her analog equipment.

Harbin reverted to the landline as part of an ongoing project she has undertaken. She means to preserve and celebrate obsolete technology. Not for nothing, she’s also interested in a kind of self-preservation: “I don’t want to be so accessible wherever I am. If I’m not home, I can’t talk.”

I was calling her to ask about a non-telephonic subset of this effort, one centering on that charmingly degradable entertainment software familiar to anyone born before 1997: the VHS tape. Over the past few years, she has transformed her bedroom into a semi-comprehensive VHS library. With more than 500 of those clunky plastic tapes in her possession, Harbin has spent many hours of informal research on what she says was an important moment in cultural history.

“I have bad taste in movies,” she tells me. “What I have is an addictive personality that ran rampant when I finally had the space to collect as many videos as I wanted.”

Now comes the next phase, an endeavor she calls the Roaming Center for Magnetic Alternatives. The roaming part is a 1994 GMC Safari. The center part is that Harbin has cleared enough space to house all those tapes in the Safari, on shelves custom-designed for a life on the road.

Do you remember the last time you even drove by a Blockbuster? Do you remember a Blockbuster ever driving up to you? Harbin’s Safari will do just that; it’s a lending library, driven by someone targeting areas where people have been, as she puts it, “media marginalized.”

“If you’re low-income and part of a minority group, you’re less likely to go on to study something like video production,” Harbin tells me. “Therefore, it tends to be the same kind of person who gets behind the camera. And that person decides what gets put in front of the camera. This perpetuates a certain type of image about who makes up humanity.”

This, then, is the alternative part of her mission.

Alongside recognizable titles such as Hocus Pocus and Bagdad Café — films presumably green-lighted by the usual straight white men — Harbin has collected films such as The Watermelon Woman, the diary-style Videos by Sadie Benning, and tapes discarded by public libraries due to low circulation. She has tried in particular to rescue works that address queer belonging in a hetero-dominant culture. (Inasmuch as there’s a thematic metaphor at work in the RCMA, it’s the deteriorating magnetic medium representing the historic rarity of gay filmmakers and cinematic expressions of queer issues — especially in the relatively benighted, AIDS-fearful VHS era.) 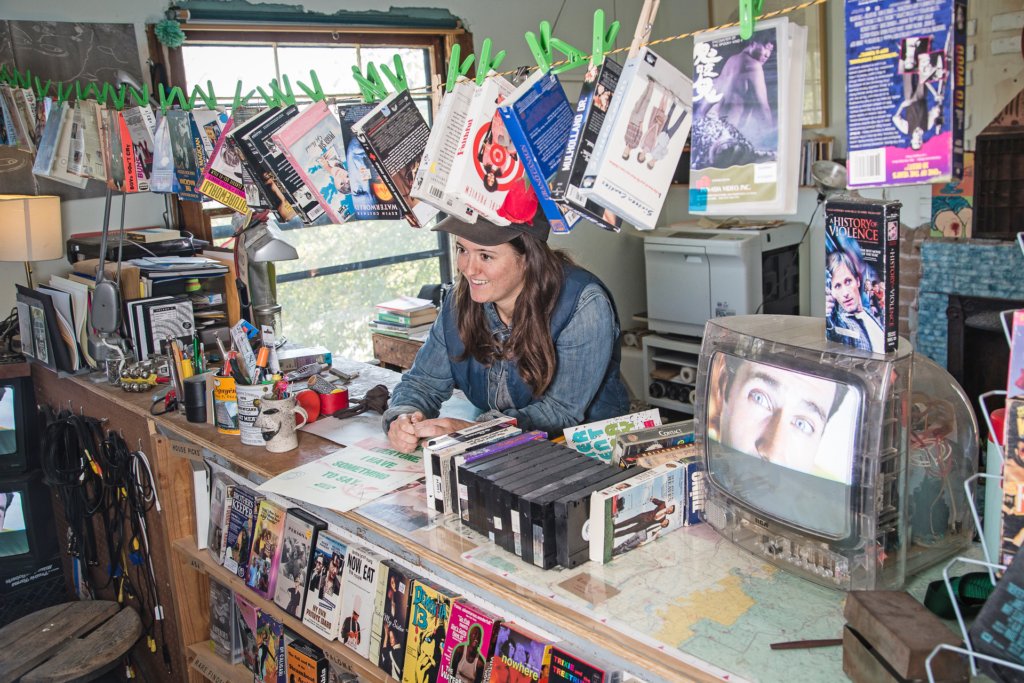 Harbin means for her unconventional tapes to reach unconventional people, and she’s preparing to drive deep into the rural heartland — parts of Oklahoma, Arkansas, Nebraska and Texas — to find young people who might be struggling with an unconventional identity. “Visibility for the queer population is an issue, especially in film media,” she says. “In one sense, the point of the project is to give people an outlet to see themselves represented. In another, it’s a project about what media representation looked liked in the VHS era. There is this big outreach component, and I don’t see the conversation about film diversity in the VHS era happening until I give people the resources to explore how this came to be.”

But what about YouTube? What about our age of the cloud, of phones you can take anywhere for private viewing and conversation? Why VHS? I ask Harbin over our hard-wire connection.

“To me it’s obvious why this format deserves investigating,” she says. “We don’t question why we teach and study bookmaking and filmmaking, because those are historically esteemed. The VHS is technically shitty, but it had such huge cultural impact and significance to my generation.”

Beyond that, Harbin is playing a hunch, using her RCMA as a divining rod to unearth whatever roots connect the generation who experienced VHS as a marvel and a boom, and … those of us who came later.

“My generation is coming into adulthood and beginning to influence the world,” she tells me. “This is happening at the same time the timestamp on VHS tapes is saying SELF-DESTRUCT. There has to be an overlap.”

Harbin was born at a moment when the VHS camcorder usurped film as the dominant means of home moviemaking. Out there somewhere — everywhere — are thousands of hours of amateur cinematography and de facto sociology. Christmases, birthdays, proposals, weddings, embarrassments. Human encounters. Documentation of the way we lived not very long ago. Marooned on a defunct format, though, all of these moments are at risk. The means of their storage is slipping away. In another 25 years, the contents of even a fairly well-stored tape are likely to be lost. Digitization isn’t impossible, but it’s neither cheap nor widely available. 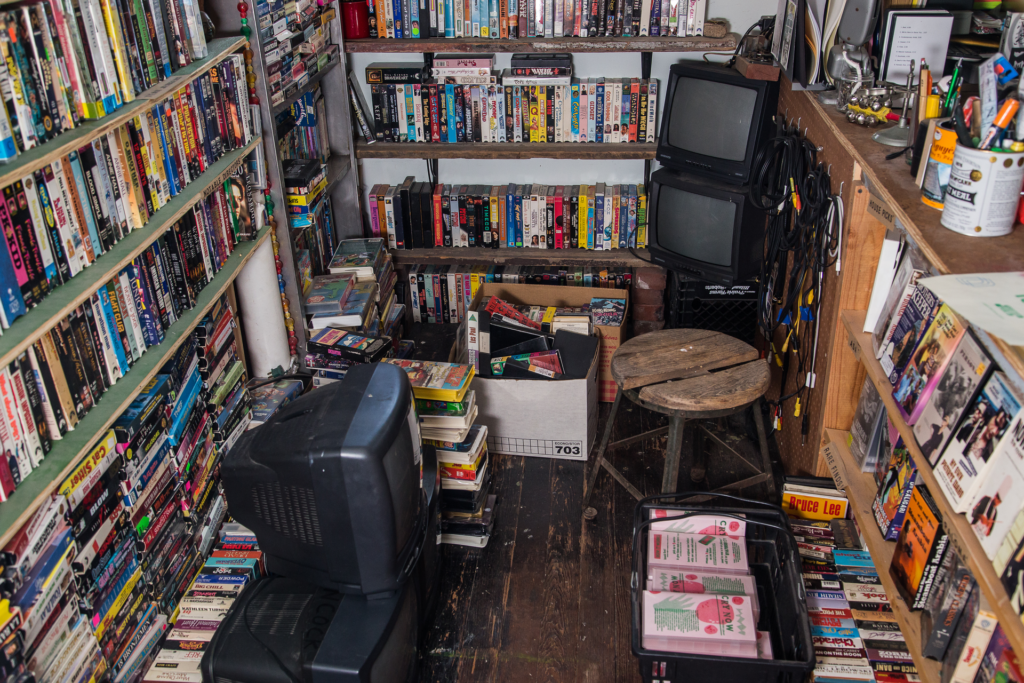 Here, then, is the mercy in RCMA’s mission: on-site migration for those who want to convert their VHS tapes into digital or audio files. “I offer this service with an optional audio track, so people can narrate what’s going on in the footage,” Harbin says. “Anyone can bring me their VHS tapes, and I will migrate the content to a digital file to share, which they keep. RCMA will keep the tape if they don’t want it anymore. But I never want to take videos too far from where they belong.”

In fact, RCMA’s Rosebud moment involves an unknown home video. Harbin was in the process of moving her grandmother into an assisted-living center when she uncovered a tape with no label. When she slid it into the VCR, Harbin realized the film contained the story of her grandmother’s life. Someone in the family had possessed the foresight to begin a project in the early days of film, and then transfer the old medium to what was then more readily accessible. Now, on this chunky, unremarkable videocassette, Harbin saw her grandmother as a 4-year-old, then as a bride marrying Harbin’s grandfather, then becoming a mother. She watched her own mother grow up as the tape unspooled, then saw her grandmother start over with a girlfriend, and then saw another family story unfold.

All of this on an old VHS tape that someone could easily have thrown away without a thought, unable to play it now that DVDs are giving way to streaming. Harbin understood that someone needed to preserve what she could have lost. Yes, some of her Safari’s customers will want the commercial stuff from the Reagan and Clinton years. But on the road, she also hopes to set about preserving messy, beautiful personal stories. And watch them, too. On the other end of that landline, I hear Harbin tell me, “It’s a real gift to be able to watch these now.”