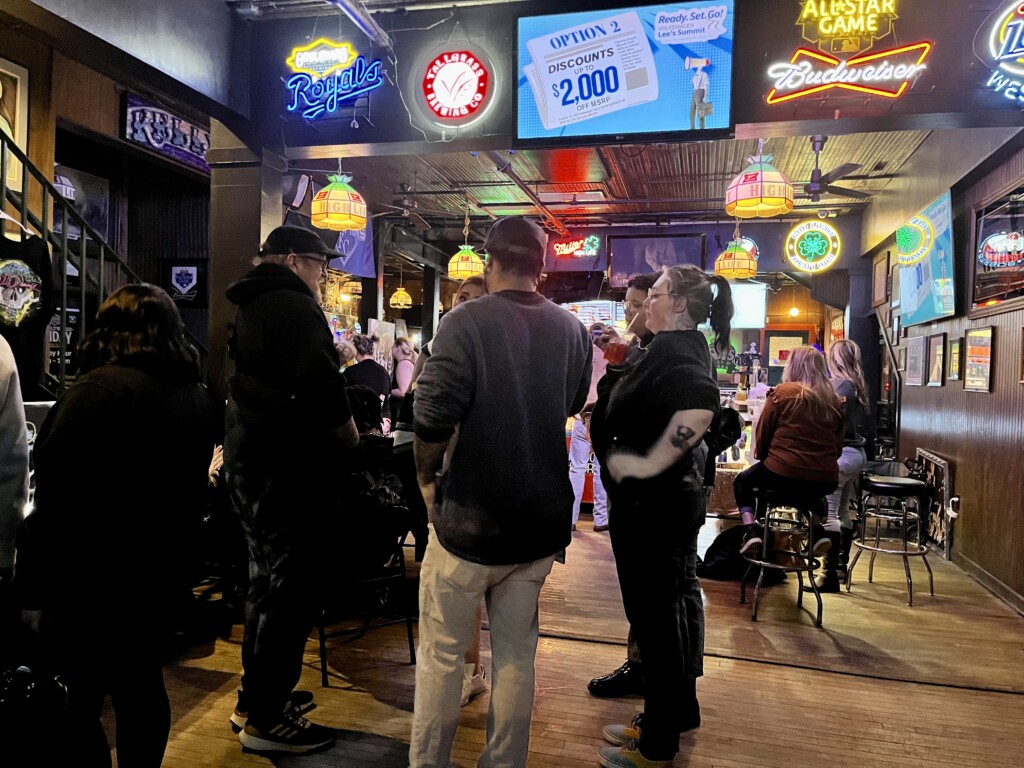 On January 16, Kelly’s Fourth Annual Art show felt like falling into the rabbit hole that led Alice to Wonderland, and it was awesome.

The traditional pub exterior of Kelly’s Westport Inn, a beloved bar and social staple of the Westport area since 1947 might not strike as the gathering place for an art show.

Past the fully stocked bar and the TVs broadcasting various sports games, we walked through a portal into another world. Actually, it was just a ramp that led to the back half of the bar, but still, it felt just as transformative.

From floor to ceiling, original artwork lined the bar. This year’s show highlighted the work of artists who incorporate blacklight and vibrant colors into their work. The curators of the show turned the space into a functional gallery with the use of UV flashlights, illuminating the glow-in-the-dark surprises of their pieces. 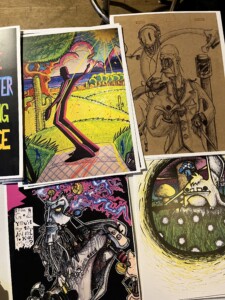 Nicholas “Church” Barrett, a KC artist and founder of the True Nature Crew, started the show four years ago with just a couple of artists each year and has goals for the crew to host next year’s show at a space of their own.

Emmett Pellant, a participant in this year’s show, is a creator whose work invites viewers to explore a universe of bees, dragons, pirate ships floating through space, and armored warriors slashing through villains with laser swords.

His artwork uses mediums from ink and colored markers to fluorescence and metallics. He takes inspiration from artists like Hayao Miyazaki, Disney animation, and even the ’90s rap group Wu-Tang Clan—whose influence can be seen in the frequent use of black and yellow colors in his drawings of his dragons.

Pellant’s work goes beyond the canvas. His writing, which explores the characters and worlds his drawings portray, was also on display. “My goal is to make something everyone can enjoy—a story for all ages, genders, religions, cultures, creeds, races, etc. I want to create a cartoon that is so good and positive, full of a diverse cast of compassionate people that feels so unequivocally human,” says Pellant.

The crew also brought in jewelry, merch, and crystal vendors.

Susan Hawkins, the owner of Crystal Revelry, had a mesmerizing display of crystals and stones at the show, a few of which also glowed in the dark under UV light.

“Being a part of Kelly’s Annual Art Show has allowed me to reach out to and meet so many people that I previously didn’t know in Kanas City. Being in Westport, there is such a huge diversity there, and I love that about this event,” says Hawkins.

The show also offered live music and a raffle to win a laptop or a “graffiti pack” loaded with all the materials to make your own art.