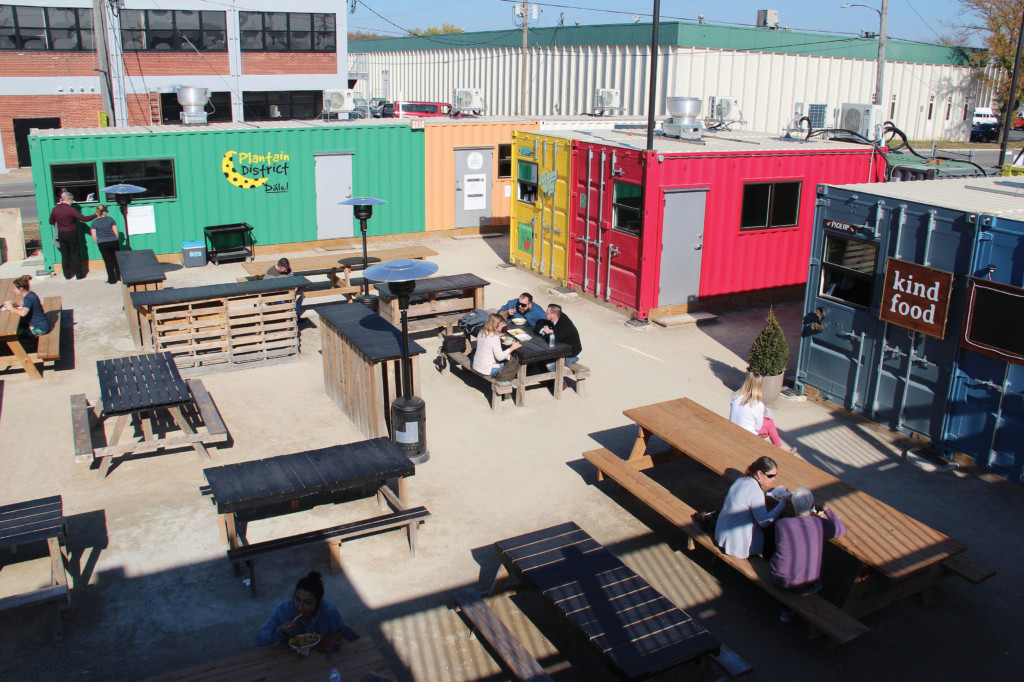 It’s a golden age for the sorta-upscale, fast-casual hubs known as food halls—fancy food courts, as many describe them. That’s true all across the U.S., and especially so lately in Kansas City, where every few months seems to bring news of a new hall opening somewhere in the metro.

The best-known of these halls, Parlor, has been a Crossroads hit, offering everything from Detroit-style pizza to Korean comfort food to Louisiana po’boys in its stalls. Then there’s the Lenexa Public Market (which, in a somewhat unusual arrangement, is actually owned by the city of Lenexa); Strang Hall, a downtown Overland Park food hall slash business incubator concept from Freightquote founder Tim Barton; and a hall at Mission Gateway that will purportedly be curated by Top Chef’s Tom Colicchio (though after a decade of empty promises, we have a hard time believing anything will ever again sprout out of the ground at Mission Gateway).

Not exactly a food hall, but close, is the Iron District, which unassumingly opened in mid-October on what had long been a vacant lot at East 16th Avenue and Iron Street in North Kansas City. (It’s just around the corner from the rock-climbing destination ROKC and about a ten-minute walk from Chicken N Pickle.) Founded and owned by Kansas Citians Rachel Kennedy and Zach Taylor, the Iron District is unique in that it’s actually a collection of new and repurposed shipping containers.

“We wanted to create a collective space for vendors to be able to test out concepts—both food and retail—and create a group think-tank to help ourselves as individual businesses and as a group,” Kennedy says.

Kennedy is a familiar face in the KC food industry; for the last five years, she’s been the owner of Plantain District, a Cuban food truck and catering business. She’d been thinking for a while that she wanted to offer customers a reliable place to find Plantain District, and the idea of an outdoor food mall kept bouncing around in her head. Finally, she fleshed out the idea and took it to Zach Taylor, a mechanical contractor specializing in commercial kitchens who also owns the land the Iron District now occupies. He liked the idea. Taylor started managing a buildout, and Freeman set about recruiting businesses and meeting with city officials to get the process started.

“Among the food concepts are an avocado bar, an allergy-friendly bake shop, and an entirely plant-based operation.”

Like many other food halls, the Iron District provides equipment, kitchen space, and the retail space itself in exchange for rent and a small portion of sales. (An additional bonus: Kennedy offers entrepreneurship training and classes to tenants through Adrienne Haynes of SEED Law, an entrepreneur-focused firm.) The model quickly attracted several vendors, including Philip and Jonelle Jones of Kind Food, a plant-based vegan concept serving burgers, sandwiches, wraps, nachos, and daily kombuchas.

“We had been brainstorming ways to enter the local food scene without risking hundreds of thousands of dollars on a full brick-and-mortar space right out of the gate,” Jonelle says. The fact that kitchens and basic equipment were part of the deal at the Iron District—plus the option of a short-term lease—sealed it for the Joneses. They opened Kind Food in an Iron District shipping container last month.

In addition to Kind Food and Kennedy’s Plantain District, the Iron District includes the avocado-centric kitchen Avobite, which specializes in rice bowls and salads heaped with fresh salsas and generous scoops of fresh avocado; B’Rad’s, which offers burgers, tacos, noodle bowls, and sandwiches; allergy-free baked goods and desserts from Safe Bakes; and soft-serve and other frozen treats from Ice Cream Bae.

The Iron District isn’t open all-day everyday; the idea is to focus on hours when the businesses are most likely to attract customers. A breakfast restaurant, Morning Day Cafe, opens at 7 a.m. every Monday through Friday, serving hearty breakfast fare and coffee. When 11 a.m. rolls around, the other food vendors open for lunch, then close up shop at 2 p.m. On Fridays and Saturdays, the stalls reopen at 4 p.m. for happy hour and dinner services (some stalls also offer an earlier-morning brunch option on Saturdays). On those weekend nights, live bands and DJs will often join in.

Kennedy says she isn’t sure at this point whether the Iron District may ultimately become a seasonal operation; because it’s outdoor, closing in the winter might make sense. For now, she’s just observing customer reactions and trying to get the word out.

“We are treating these next few months as our soft opening,” Kennedy says. “It’ll give us time to get into our flow, and get ready for our 2020 season.”