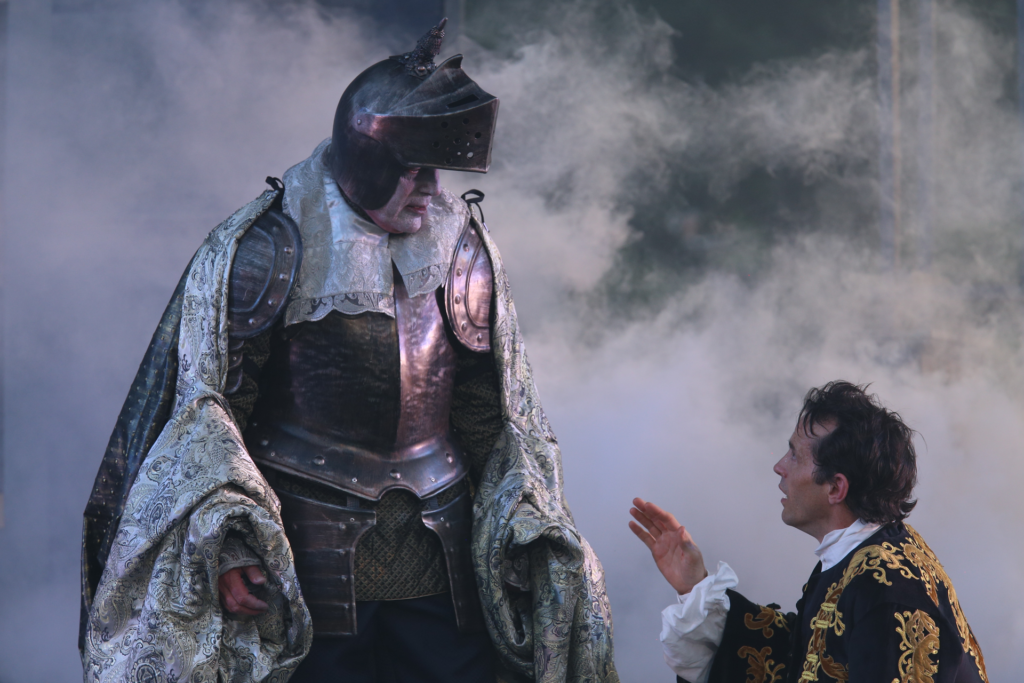 “Is there not enough rain in the sweet heavens?” Hamlet’s King Claudius asked toward the end of the Shakespeare fest’s first half — an utterance that, a few nights ago, drew a good-sized laugh. A storm was, in fact, approaching. As the rottenness of Denmark grew ever more apparent onstage, the skies were lighting up and the wind was blowing ever stronger off.

Such is the risk of staging plays in the outdoors, where rain and lightning can abruptly end a performance. But such also is the symbiosis that can — and, that evening, did — exist between actors and audience, the latter in this case spellbound in an urban park capable of many distractions. Even when cicadas threatened to compete with the lead character’s first soliloquy, Hamlet (Nathan Darrow) would have none of it, dominating our focus at that moment, and all that night. Well, until intermission, anyway, when a disappointed (but not surprised) audience heard, over the PA, that the show could not safely go on.

“The play’s the thing,” Hamlet says (in a different context), and here, indeed it is. This is the Heart of America Shakespeare Festival’s 25th year, and executive artistic director Sidonie Garrett has mounted a play that is not silver but gold, dazzling in both its production values and the work of its outstanding cast members. The peripheral sirens and planes, the car radios and even the approaching thunder — nothing lessens the impact of this fast-moving, energetic and dynamic production.

It was the same on a clear-skied and surprisingly cool summer evening, in a packed park that included lots of kids — a not-inappropriate outing for Father’s Day, given all the fathers (good ones and not so good) so prominent in this story. (Speaking of taking the kids: This Hamlet is, like most productions of the play, condensed — Fortinbras, the prince of Norway, isn’t invited to this gathering — but it’s still three hours long. No complaints from me, but fair warning for families.)

We’re within Hamlet’s dramatic grip from the first moments, with the arrival of a ghost. Hamlet’s father, the good King Hamlet (John Rensenhouse), has recently died, and his brother Claudius (Bruce Roach), Hamlet’s “uncle-father,” as Hamlet calls him, has already married Gertrude, his “aunt-mother” (Jan Rogge) and queen of Denmark, and ascended to the throne. It’s a confusing time for our lead character, who is both saddened and disturbed — “The funeral baked meats did coldly furnish forth the marriage tables” — but not suspicious until an apparition of his father appears, telling him of his murder at the hands of the new king. (Sound effects by Rusty Wandall, makeup and costuming together help create Rensenhouse’s eerie and furious soul.) And so, the scene is set for the grief and trouble to come — spliced, even, with comic and ribald insertions.

Is the ghost honest or a devil? Hamlet feels he must know before acting on its request for revenge. “Am I a coward?” he later asks, seemingly to us. Death and its unknowingness, as well as revenge, preoccupy our protagonist and stymie his ability to act. “Conscience does make cowards of us all,” he says.

A native of KC who has made good on the national scene (Netflix’s House of Cards, HBO’s The Wizard of Lies, Showtime’s Billions), Darrow here is electrifying and commanding. His strapping presence undergirds a performance that makes Darrow’s a strong Hamlet even when the prince is sullen. He doesn’t so much waffle as weigh his options and concerns as he struggles to deal with sorrow (he’s attired mostly in black throughout the first half) and the overwhelming weight of political intrigue and wrongdoing. “We are arrant knaves all,” he tells Ophelia (Hillary Clemens).

While we watch the play, we view it through the eyes of this flawed hero, empathizing with his anguish, understanding his supposed “lunacy,” growing frustrated with his delay, and relishing his wit. Yet Hamlet, despite a close friendship with Horatio (Jake Walker) and a romantic interest in Ophelia, goes it alone — in the story if not on the stage. 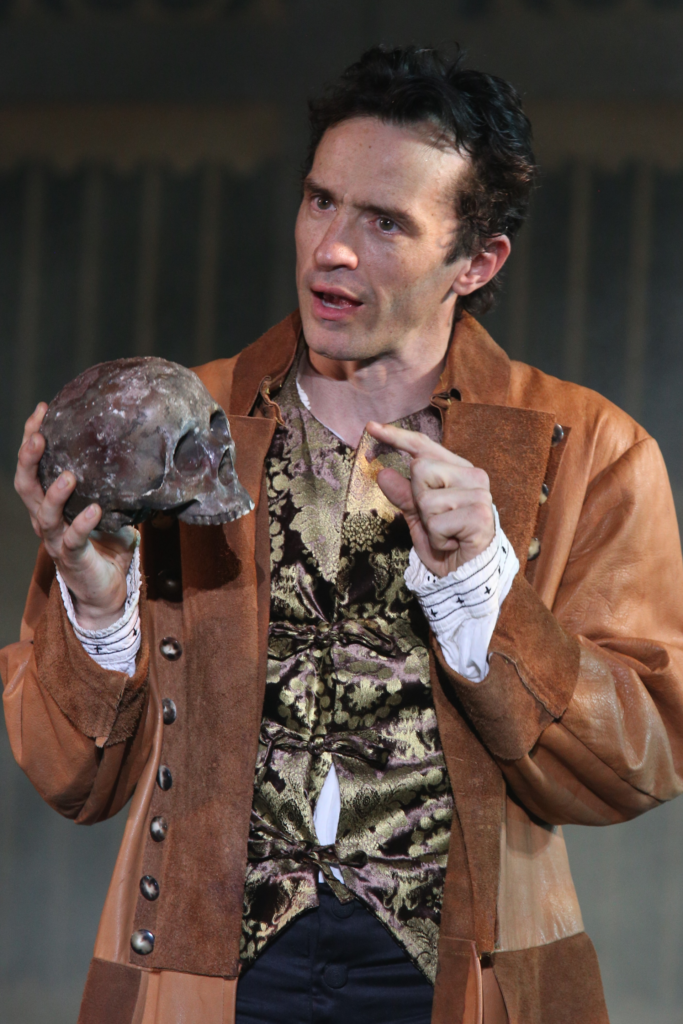 Darrow’s gravitational pull doesn’t distract from the work of his fellow actors, who are solid celestial bodies, not orbiting moons. It’s a large and true ensemble. In Garrett’s hands, even bit parts (too many to mention here) are portrayed with clarity.

As Polonius, adviser to the king and father to Ophelia and Laertes, an excellent Robert Gibby Brand is tediously talkative and pompously boring without being either to us, even balancing his inner father with his outer crafty collaborator. It might explain Ophelia’s overwhelming grief at news of her father’s death, which drives her to madness. Clemens’ sensitive Ophelia moves from sweet and innocent to sweet and insane — and, in the process, moves us. As her brother Laertes, the strong Matt Schwader is infectiously libertine as he heads for life in France, then is stoked with rage upon his return to find his family destroyed.

A skillful Roach portrays King Claudius with weaselly evil and Machiavellian ease, giving a corrupt human component to this murderous usurper who will stop at nothing to hold onto his power. As Gertrude, the nimble Rogge expertly walks the line between weak and obtuse — “frailty, thy name is woman,” Hamlet says, helping explain, perhaps, his treatment of Ophelia — and infuriates us as well as her son. Her scene with Darrow’s Hamlet in her bed chamber is absorbing and charged.

The talented Walker, who has portrayed the lead role in the past, provides an anchoring presence as Horatio, and exudes strength as Hamlet’s trustworthy confidant. Darren Kennedy’s Rosencrantz and Collin Vorbeck’s Guildenstern lend Hamlet’s college buds a humorous, shallow and colluding aura. And Rensenhouse is powerful as the frightful ghost of the murdered good king.

The Players, the theatrical troupe that performs at the palace, make too brief an appearance, their lively entertainment a welcome relief. Mark Robbins is magnetic as the Player King (and, along with his supporting players, a joy to observe). Also of note: Wyatt McCall as Osric, and Matt Rapport and R.H. Wilhoit as the gravediggers.

A gilded, castle-like façade provides an all-purpose royal backdrop (scenic design by Gene Emerson Friedman). Costumes (by Mary Traylor) are stunning (and appropriately gaudy for Polonius), the courtiers and ladies in fine apparel and the royals draped in crimson and gold, with sparkly jeweled crowns. Even Hamlet’s black attire, which switches to golden tones in the second half, gives him a royal air.

As at the Globe Theater in London that is open to the sky, fresh air may be this summer’s best environment for taking in this outstanding rendition of Shakespeare’s play. Come early for a preshow talk and/or a preshow parody for the full experience. Grab some food (or take your own). This play’s the thing, at 7:30 p.m. Tuesday through Sunday, through July 2.