The federal Consumer Financial Protection Bureau couldn’t have picked a better spot than Kansas City for a hearing on payday lending. Friends and foes have been dug in for years, and Thursday’s forum, at the Music Hall, brought everybody out of the trenches.

Critics began massing at Barney Allis Plaza around 9 a.m. They brought signs and slogans to make a point: that short-term loans at exorbitant interest rates are ruining families and draining money from communities.

Notable among the consumer activists and faith leaders heading up the rally was James V. Johnston Jr., the new bishop of the Catholic Diocese of Kansas City-St. Joseph, who stood in the morning sunlight in full white vestments. Given the church’s chagrin when some of its parishes turned out to be beneficiaries of ill-gotten profits from internet payday loans, Johnston’s presence was unexpected but welcome.

Predatory lending “is one of the most atrocious things that still exists in our society,” Johnston told The Pitch this morning. “It’s incredible that people can be exploited like this.”

Early in the rally, security guards appeared and instructed organizers not to use megaphones. The command seemed vague and possibly illegal in a public space, but speakers complied and shouted instead.

“One of the private security guys apologized to us afterward and said he was in the payday-loan trap himself,” said Molly Fleming, one of the rally’s organizers. 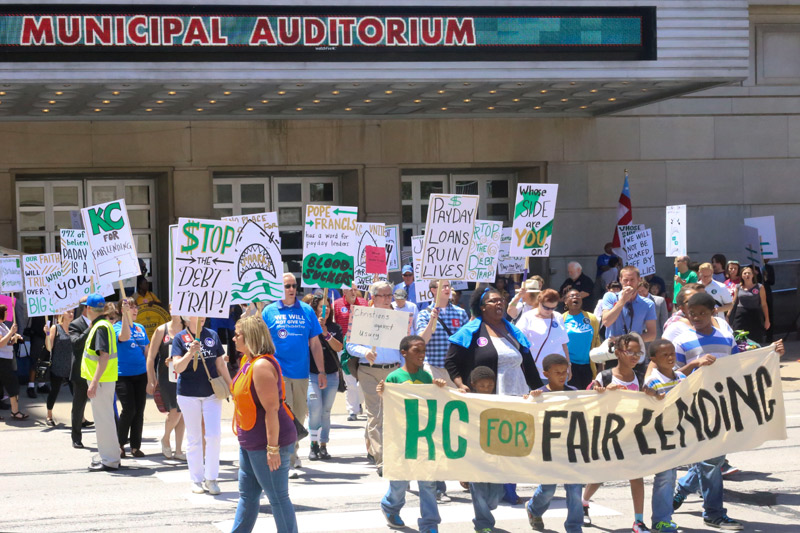 Meanwhile, two charter buses pulled up in front of the Music Hall. These turned out to be filled with the industry’s supporters, many of them employees of payday-loan shops enjoying a day out of the office.

Around 10 a.m. several hundred persons settled into seats in the auditorium for the main event, a panel consisting of industry representatives on one side, and consumer and faith leaders on the other. 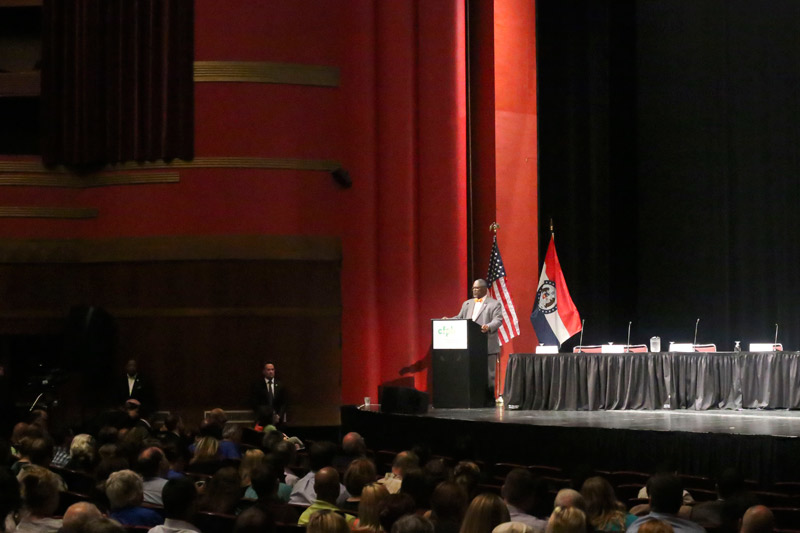 Richard Cordray, director of the Consumer Financial Protection Bureau, described proposed new regulations on payday lending and related practices, such as auto-title lending. They center on the concept — hardly radical — that, prior to issuing a loan, lenders should have to determine whether a prospective borrower can afford to repay a high-interest short-term debt and still meet basic living expenses.

Representatives of the industry countered that such regulations would be unfair and would put them out of business. In effect, they were acknowledging that payday lending exists to prey on people who can’t afford to repay their loans.

Darrin Anderson, CEO of Overland Park-based QC Holdings, drew lusty applause from the industry shills when he said regulation of payday lending should be the responsibility not of the federal government but of “local and state policy makers, who know their constituents best.”

Anderson is very familiar with state policy makers, especially those in Missouri. His company has been a leader in the industry’s intense effort to make sure that the Show-Me State holds on to lax regulations that permit the average annualized interest rate on a payday loan to exceed 450 percent.

In fact, Missouri’s history with payday-loan legislation makes a great case for why uniform federal regulations are needed to protect consumers.

Reform legislation offered over the years, usually by Democratic lawmakers, has been stifled in unfriendly committees by leaders of the Republican-controlled General Assembly, or ignored altogether. This year’s try never got a hearing. Democratic Sen. Jill Schupp, of St. Louis County, filed a bill that sought to cap the annual rate of a short-term loan at 36 percent, which is the limit that Congress allows on loans around U.S. military bases. Her legislation received an unceremonious burial in the Senate’s Financial and Government Organizations and Elections Committee.

No one was surprised. The committee’s vice chairman, Mike Cunningham, of Rogersville, has raked in close to $40,0000 from the payday industry since 2011, according to records compiled by Progress Missouri, a liberal watchdog group, and the National Institute on Money in State Politics.

The payday industry gives generously to candidates and committees affiliated with both parties. It has been especially magnanimous with high-profile officials such as Attorney General Chris Koster, a Democratic candidate for governor, and Republican House Speaker Todd Richardson.

Frustrated by the Legislature’s refusal to reform lending laws, an alliance of consumer and faith groups in 2011 began laying the groundwork for a 2012 statewide ballot initiative to enact tougher regulations. This drew two opposition groups, one representing traditional payday lenders and the other supporting the installment-loan industry. Together they raised more than $3.3 million to defeat the citizens’ effort.

Since that scare, lenders have remained vigilant. Progress Missouri reports that Missourians for Equal Credit Opportunity, the campaign committee bankrolled by traditional payday lenders, spent $1.53 million on political activity during the 2014 campaign cycle, even in the absence of a ballot initiative. Stand Up Missouri, the committee bankrolled by installment lenders, amassed campaign reserves of $450,000.

Besides buying off politicians, industry money enriches a cadre of  consultants and lawyers. Most notable is Kansas City-based consultant Jeff Roe, whose firm, Axiom Strategies, received an eye-popping $1.1 million from 2011 through 2015 from Missourians for Equal Credit Opportunity.

Records show that the lending groups also give money to groups such as the Missouri Legislative Black Caucus, Kansas City Urban Summit and the St. Louis Baptist Ministers Union. Those expenditures are a cynical ploy to enlist black leaders to promote the deception that payday loans are an asset to black communities.

Cassandra Gould, executive director of Missouri Faith Voices, disputed that false notion during Thursday’s hearing. Predatory lending, she said, is “a scourge on minority communities.” She voiced support for the federal consumer agency’s new proposed regulations, especially the call for a measure of underwriting before a loan is issued. “Basically, to get a payday loan, all you need is a checking account and to be breathing,” she said. 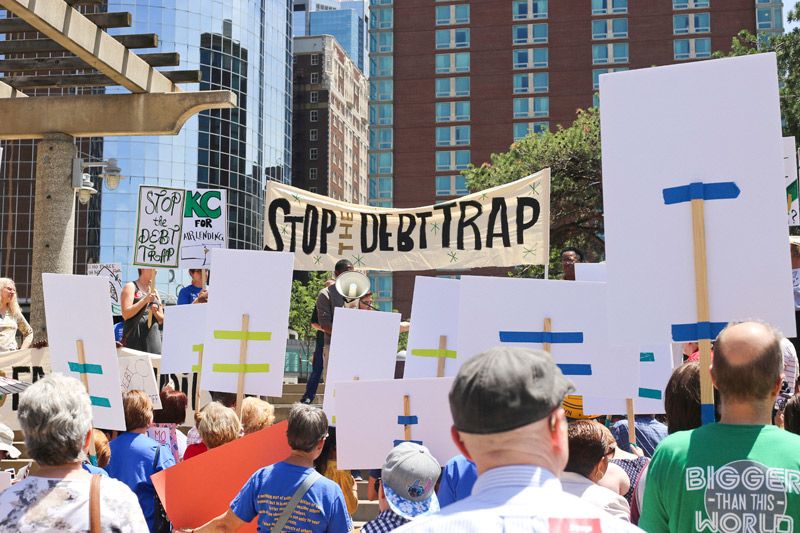 Following the panel discussion, officials from the federal agency said they would hear public testimony for the next four hours.

People began telling their stories in one-minute installments — the maximum time allowed. Others filed outside for more demonstrations or departed for other business.

No one leaving the event had to go far to see why payday lending is such a hot topic in these parts. Drive around the city’s poorer neighborhoods and you’ll see a “quick cash” shop on just about every corner. Drive around the metro’s higher-end neighborhoods and you can view the mansions of swaggering entrepreneurs who figured out how to make millions by draining the bank accounts of consumers who signed up for online payday loans.

No, Cordray and the CFPB could not have picked a better community to make the point that federal rules are needed to protect consumers from rapacious lenders. The tougher the better.