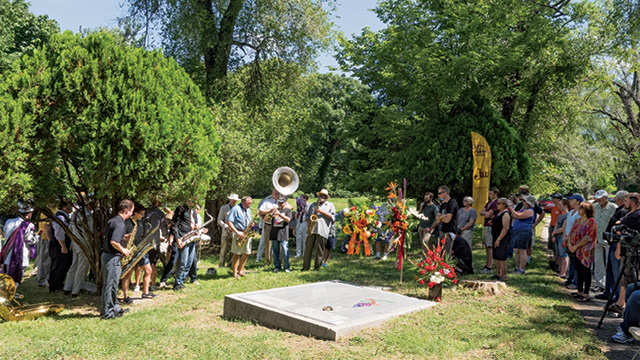 Miles Davis once said, “You can tell the history of jazz in four words: Louis Armstrong, Charlie Parker.” Parker was born in Kansas City, Kansas, raised in Kansas City, Missouri, and is buried in a cemetery off Truman Road, in Blue Summit. Clint Eastwood directed a movie about him. Alvin Ailey honored him with a dance. Rolling Stones drummer Charlie Watts wrote a children’s book in tribute to him. In New York City, his home has been designated a historic landmark. Yet in the years since his death, in 1955, Charlie “Yardbird” Parker’s hometown has torn down the house where he grew up and, other than a statue in the 18th and Vine district, has mostly ignored the man and his legacy.

In the early 1970s, musicians started gathering at Parker’s gravesite on his birthday — August 29, or the Saturday closest to it — to play his music. Forty years ago, in 1977, that gathering grew into the 21 Sax Salute, with this city’s jazz saxophonists and horn players converging on Lincoln Cemetery to celebrate the bebop architect. The salute had begun to fade in the new century, but it was adopted and given fresh prominence in 2014 as the centerpiece of a new event, the Charlie Parker Celebration. That first celebration lasted 18 days and honored, finally, the alto saxophonist whose extraordinary innovations with chords and harmony changed music and culture.

The past two years, the celebration has spanned a more manageable 10 days and has added an artist in residence, a guest musician who sits in each night with local ensembles or students. Last year, three-time Grammy winner Tivon Pennicott jammed in local jazz bars and in Lincoln Cemetery. His saxophone solos — sometime searing, sometimes romantic, consistently peppered with fresh and intelligent ideas — elevated the music. This year he returns, joined by a second artist in residence, keyboardist Sullivan Fortner.

Fortner was in town over Memorial Day weekend backing guitarist John Scofield at the Kansas City Jazz and Heritage Festival. Relaxed but sharp behind the piano and Hammond B3 organ, he punctuated Scofield’s eclectic jazz and funk reinterpretations of country classics with energy and soul. The 30-year-old musician grew up in New Orleans, but his performing career didn’t start with jazz.

“I was playing a lot of church music, and I didn’t know very much about jazz other than New Orleans second-line music or traditional Mardi Gras music,” he says. “I didn’t really pay attention to it because it wasn’t of interest to me.” An acquaintance urged him to apply to the New Orleans Center for the Creative Arts. “That,” he says, “was my introduction to jazz.”

Among his classmates at the school were Troy “Trombone Shorty” Andrews and Jonathan Batiste (now known as the bandleader on The Late Show With Stephen Colbert). Batiste was performing with trumpeter Roy Hargrove sometime after college when he recommended Fortner. “They called me and asked, ‘Can you make a month of gigs?’” Fortner says. “That month lasted seven and a half years.” A contract with Impulse Records, and his first major-label CD, led to touring with jazz icon Scofield this past spring.

Fortner and Pennicott open the 2017 Charlie Parker Celebration at the Blue Room on August 17. Through August 26, together and separately, they will jam with Lonnie McFadden at the Phoenix, Bram Wijnands at the Majestic, Tim Whitmer at Green Lady Lounge, Project H at the Black Dolphin, Micah Herman at the Ship, Stan Kessler at Westport Coffee House, David Basse at Ironwoods Park in Leawood, John Belgen and Rod Fleeman at Chaz, and Julia Haile and Chris Hazelton at the Reserve Restaurant in the Ambassador Hotel. 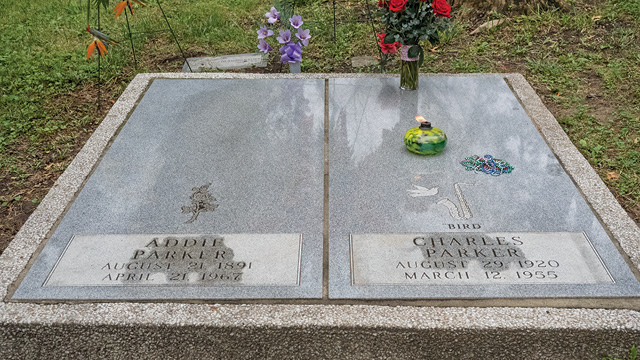 Special events at this year’s Parker fest include a stage with music in Theis Park on Saturday, August 19. A week later, on August 26, KCUR 89.3 Fish Fry host and jazz historian Chuck Haddix conducts a history tour through the 18th and Vine district, stopping for an open house at the Mutual Musicians Foundation, a National Historic Landmark, followed by a bus ride to Lincoln Cemetery for the 21 Sax Salute. Afterward, participants are invited to a “chicken feed” — Parker loved chicken — at the Bruce R. Watkins Cultural Heritage Center. That night, a program at the Folly Theater, titled “2017 Jazz Experience: Rhythm Changes,” traces the history of jazz with Pennicott and Fortner.

That takes fans through the celebration but not quite to Parker’s 97th birthday, which this year falls on a Tuesday. That day, the KCUR radio program 12th Street Jump records a special show with saxophonist Bobby Watson at Musical Heritage Theater.

The history tour, the Folly show and the radio taping are each a $25 ticket. You can head to Lincoln Cemetery for the 21 Sax Salute on your own at no charge. It starts at noon. Saturday at Theis Park is free. Some of the club shows come with a cover charge. More details are at charlieparkercelebration.com.

Sullivan Fortner is looking forward to 10 days in Kansas City. “It’s a real honor,” he says. “To me, Charlie Parker’s music is so alive and so fresh. A lot of people like to say that Bird’s music was just the ’40s, or just the ’50s, that times have progressed and moved past that. But I don’t think that. I think that’s some of the most intelligent music that’s ever been created by man.”