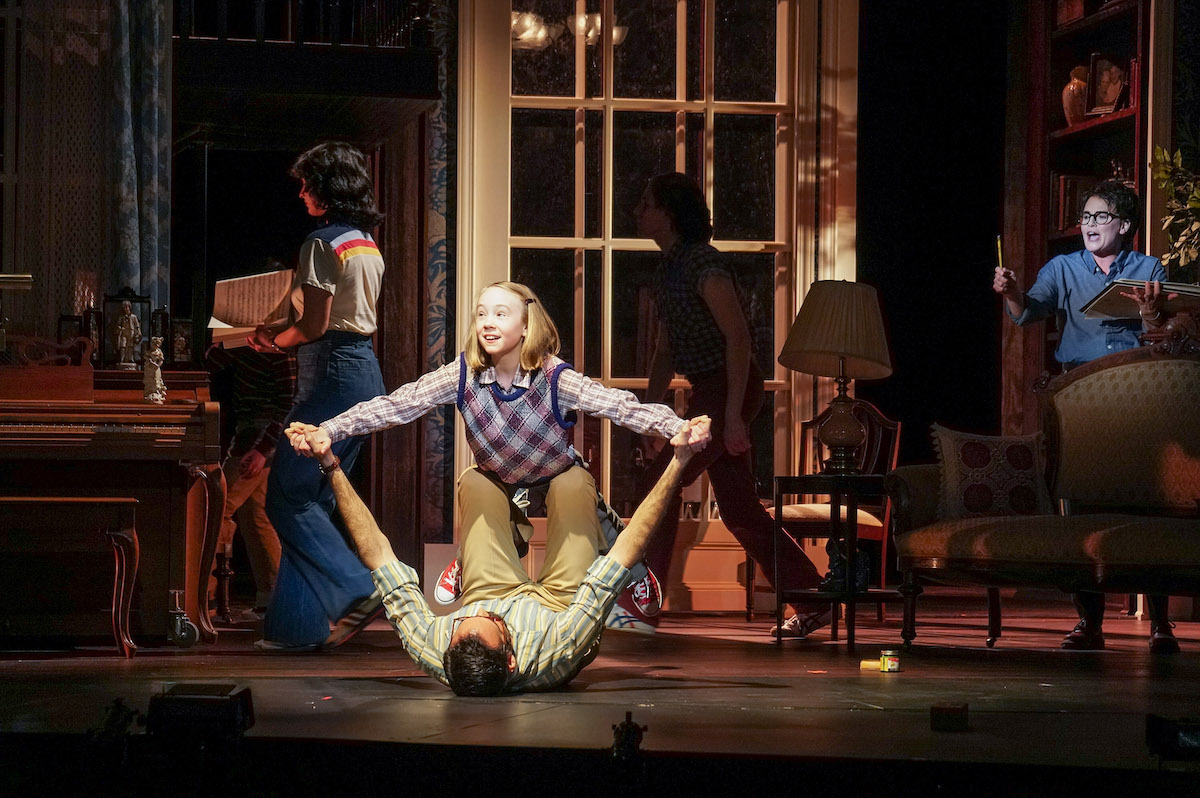 Alison Bechdel’s 2006 graphic novel Fun Home is a deep dive into childhood memories. The book isn’t just a biography—although it is that as well, as Bechdel shares with us the story of her youth. More than that, though, Fun Home explores how complicated it is to revisit those memories as an adult—to look back at how much we didn’t understand about our own lives. Because as confusing as the world can be as a child, trying to sort out the pain and the joys of childhood doesn’t get any simpler with age.

Bechdel used her style of comics to give us a window into her unique life story, as influenced by her very unique father. Bruce Bechdel was a small-town high school English teacher and the owner of a funeral (or “fun”) home, though his real passion was in house restoration. Taken to his obsessive extremes, it became more of a museum, locking the family perpetually in one moment of time.

Bechdel writes that her father “used his skillful artifice not to make things, but to make things appear to be what they were not.” That didn’t just extend to the family’s house, but also to Bruce’s dedication to maintaining an appearance as a traditional family man. In reality, Bruce was deeply closeted, something Alison didn’t discover until after she came out as gay herself.

By then, she was in college. Just a few weeks later, her father would end his own life.

Bechdel’s book was always going to be an ambitious undertaking to adapt for the stage, in large part because, again, this is not just a memoir, but a book about memories themselves. Lisa Kron, who wrote the book and lyrics for the original 2015 musical (which made history as the first Broadway show to feature an explicitly lesbian lead, which is one of those facts that elicits a reaction of equal parts “Yay!” and “How the hell did that take this long??”), found a workaround for that potentially unadaptable aspect of the story by making current-day Alison her own character, digging through her own nonlinear memories for the purpose of turning them into cartoons. We, then, are essentially watching Bechdel create the original Fun Home comic. It’s a decision that leans hard into the meta while remaining unpretentious about it.

With all of that background context out on the table, KC Rep’s production does incredible justice to every bit of its source material. Regina Garcia’s rotating set is beautiful and impressive, and the scenes in the family home make you feel especially immersed in these characters’ lives, somehow simultaneously capturing both the grandeur of the house as well as the emotional suffocation of life inside it. 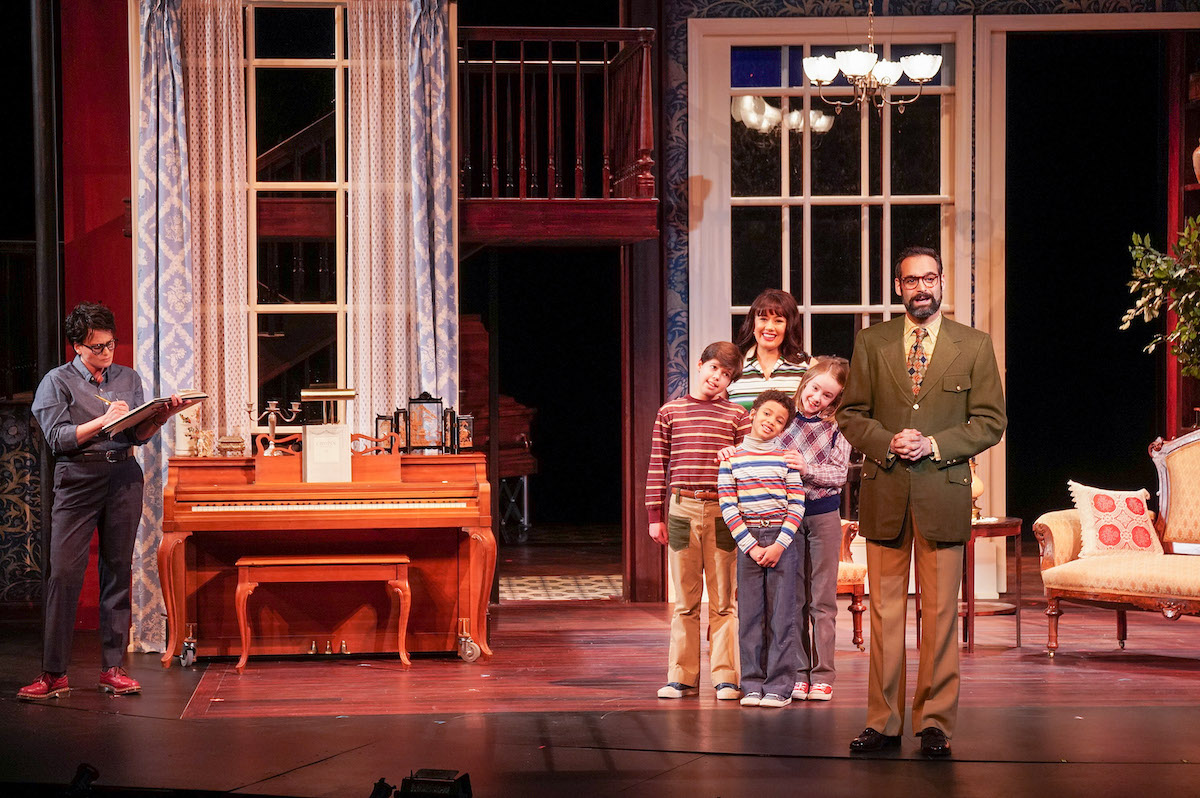 Since seeing the show, I’ve been racking my brain for who to mention as the “stand-out” performance. The thing is, there isn’t one. Or rather, there are so many.

This is a true ensemble, and it’s remarkable that there are no weak or even just fine links within the core cast. The role of Alison is split between three actresses: “Alison” as the creator of the book, “Small Alison” at her youngest age (maybe eight or ten), and college freshman “Middle Alison.” All three of these actresses give extraordinary performances. Their songs range from straight-up bangers (“Come to the Fun Home” hasn’t left my head since) to absolute heartbreakers.

This show is a short one—98 minutes with no intermission—but you might want to come prepared with a full pack of tissues. It was the memory of Small Alison’s earliest gay awakening seeing an “old-school butch” delivery woman in “Ring of Keys” that made me first pull out my Kleenex, but I didn’t put them back away for the rest of the entire show.

Those Alisons, played (from youngest to oldest) by Delilah Rose Pellow, Ellen Nikbakht, and Lauren Braton each give incredible performances. The entire supporting cast is a joy to watch. (I, too, would consider “changing my major to Joan” based on Allison Jones’ performance as Alison’s first girlfriend.)

Both parents—Jonathan Raviv playing Bruce and Mariand Torres as their mother Helen—are exceptional, and the power of their performances is weirdly heartbreaking in unexpected ways. These characters, after all, are only visited via the memories of their daughter. And as children, how can we possibly recognize the full extent of the journey our parents are going through. How can we understand their pain and their battles, both with themselves and each other? When Helen, then, finally gets to bare her soul to both us and to her daughter late in the show, it is totally earned and also as surprising as your own parent unexpectedly showing you a side of themselves you’d never thought to think existed.

This show is an incredible feat.

In a press release, director Lisa Rothe said she’s wanted to direct the show since she first saw the original Off-Broadway production (humble brag) and the fandom shows. It’s obvious just how much she and every other person involved in this production cares about these characters and their story. It’s a whirlwind and a small masterpiece.

Through February 16 at the Spencer Theater at KCRep