KCAI painter Nehemiah Cisneros is asking Kansas City, “Are we violent by design?”

Nehemiah Cisneros is a graduating senior from the Painting Program at the Kansas City Art Institute, currently exhibiting in two neighboring galleries inside the Leedy-Voulkos Art Center. The two shows are titled Violent By Design then denoted 1 and 2, with one being at Leedy’s Opie Gallery and two conveniently showing in the adjacent room in HabitatKC’s gallery space. The show at HabitatKC comes down April 29th, while the Opie Gallery’s paintings will remain until May 27th.

For all intents and purposes, this is a senior thesis show, but one that operates like a spotlight on an artist hitting his stride. It is immediately apparent this is an artist beginning his trajectory toward bigger and better things.

The primary goal here is to tell you to see as much of Nehemiah Cisneros as you can… while you can. The work is afforded a really remarkable allotment of venerable gallery space in Kansas City, and if you hurry up, you can be better for it. 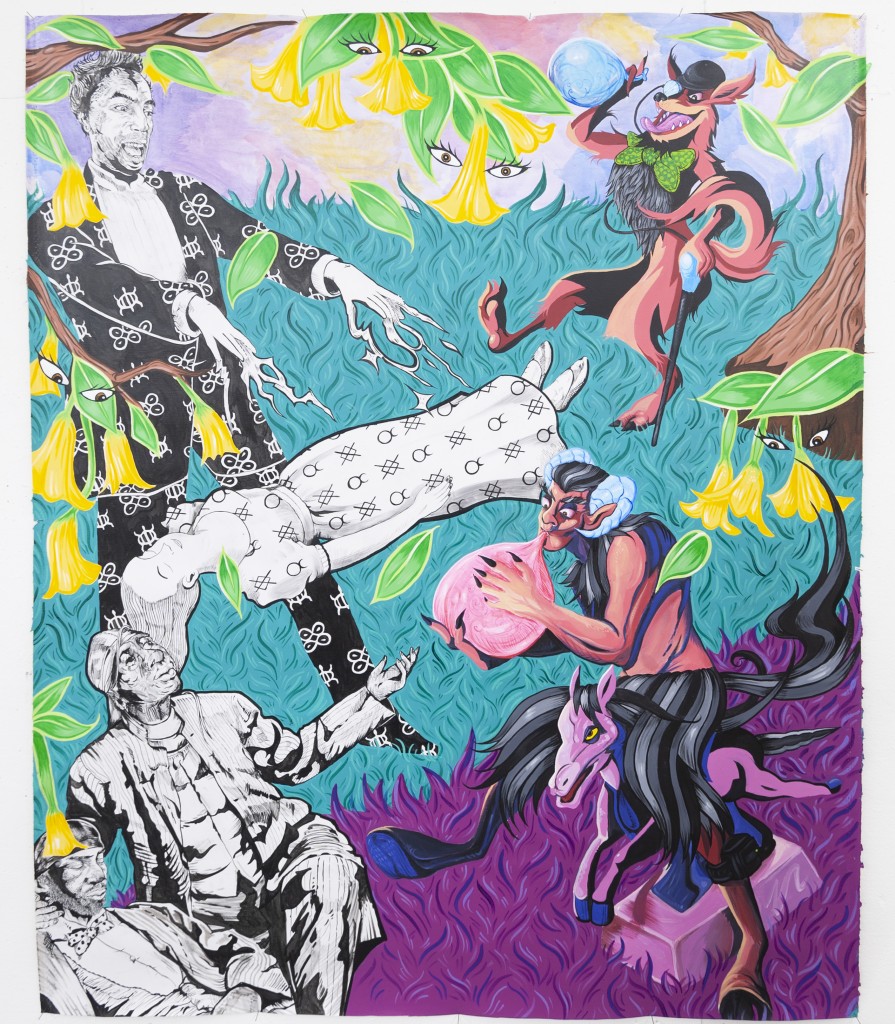 Seduction of Vice by Nehemiah Cisneros

Cisneros’ work was valued by people curating spaces inside Leedy and it’s because he has been deeply focused on painting while attending KCAI. This is a collection of big, powerful work, occupied by narratives investigating the show’s title as an expanded question, “Are We ‘Violent By Design’?” The paintings hang pinned to the wall, unstretched and opened like treasure maps, and you can just feel how easily what is not purchased will roll up, never to be seen in Kansas City again.

Cisneros comes to KCAI finishing a degree started with different objectives before a freelance commercial art career offered a decade of experience. “It was excellent, but getting my artwork viewed publicly as an illustrator involved censorship from the companies’ marketing of the products I was designing,” he says.

Some people go to college right out of high school and could potentially end up in the same place and call it successful, but Cisneros made his choice. He seems to have really enjoyed his time here learning more about something he was already skilled at.

“With studio art, the work’s scale and the subject matter are entirely in my control,” he says. “Returning to college a decade later in my thirties just felt right. I have so many life experiences from my twenties that inform the work’s themes.”

Seeing the two shows together offers a special experience. I couldn’t help but check the tags for the year each piece was created, and it ended up being more confirmation than a code deciphered. No hyperbole, you might never see something like this again- a gifted artist joining the institutional world, but bringing these specific tools from past experience, and not just working hard to improve- but sharing the process.

That’s a lot of stuff aligning as well as there seeming to be a particularly strong graduating class this year. “I’ve gained the confidence to be vulnerable in my statements from working with younger artists,” Cisneros says. “These youthful individuals are challenging art history and creating their own!”

The show at HabitatKC, closing first, read to me nearly half journey and half destination. The work Violent By Design Interlude is the smallest work on hand in either space, but is jam packed and a helpful key for symbolism you see as you move forward. The sides are defined, Blue VS. Yellow figures, with purposeful and symbolic color choices. The apartment scene depicted in this work utilizes familiar representation to define identity for the blue-skinned character through the use of hanging portraits, descriptive sculpture, and the central figure’s action. He is sculpting while watching cartoons, all figures blue.

Foreign Escapes in the Everglades, Violent By Design 2, and Violent By Design 4 surround you as you move south in HabitatKC, hanging front, right, and left respectively. In general, the best painting is magic conjured from the maker’s mind, and it seems fair to call these 4 pieces The Turn. The ease at which Cisneros fills these large frames is extraordinary, his knack for narrative natural, and it evolves before your eyes in these.

The compositions flow, but get noticeably better through detailed consideration. By Violent By Design 4, Cisneros is full tilt. The show’s initial statement asserts “the work merges the graphic aesthetics of 90’s skateboard graphics with the theatrical scale of the Baroque paintings of the 1600s,” and you really start to see what Cisneros means by that here. The figures are intertwined in combat, depicting a familiar technological gap between the armed, yellow, marauding colonizers, and blue figures breaking out of chains and fighting back by any means. Blood splashes, offering red in the middle ground of the conflict, carrying heavy symbolism. 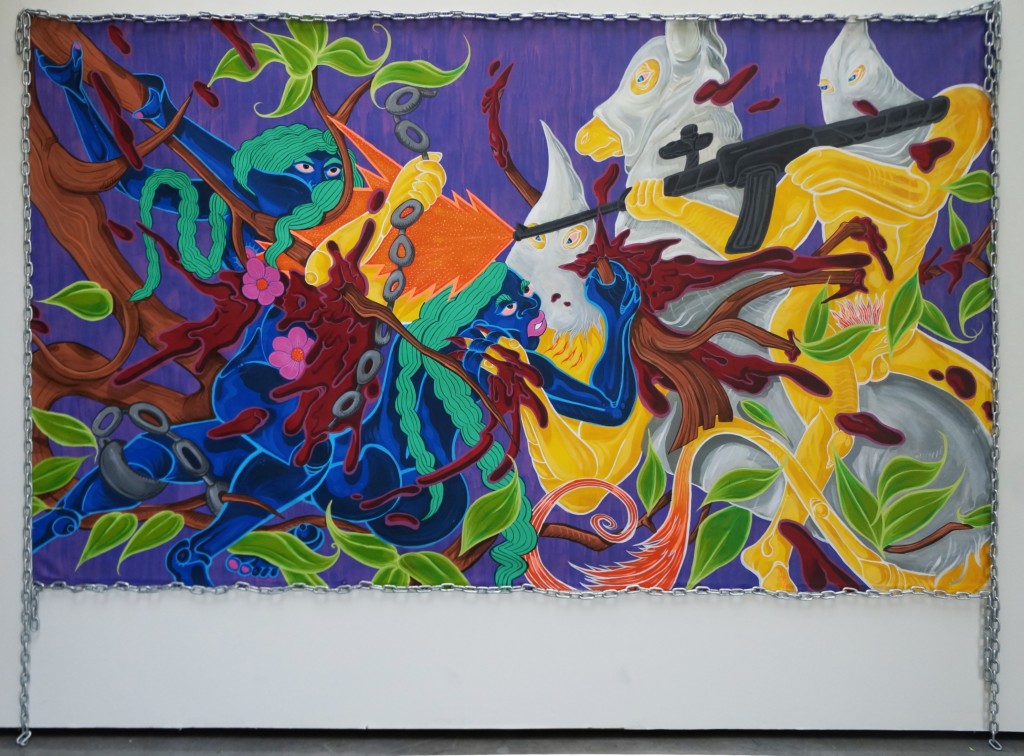 Violent by Design 4 by Nehemiah Cisneros

“Violent By Design Museum” is an absolute flex. His accurately painted small versions of the entire Violent By Design series on the walls of a museum have their own narrative going on. “I created this painting as an example of how my exhibition would look if I had my druthers,” he says. “I’m fond of the satirical contrast of augmenting art historical sculptures like Bernini’s Fountain of The Four Rivers. In my work, I mutated this iconic baroque masterpiece into a gigantic bong that supplied hydration from blue Satyrs in an atypical fashion.”

The piece has a humorous feel, with small details tucked behind straight up violence. It’s textbook micro/macro rewarding detail to give you a reason to come forward and back, and forward again. An artifact also featured in Interlude is repeated, and in a glass cased used by a yellow Satyr for drug use while a blue figure with an ankle monitor looks on questioning the necessity. Chaos reigns while others take selfies. A statue of a yellow, hooded horseman tips backwards, exposed as having been held in place by only bubblegum. 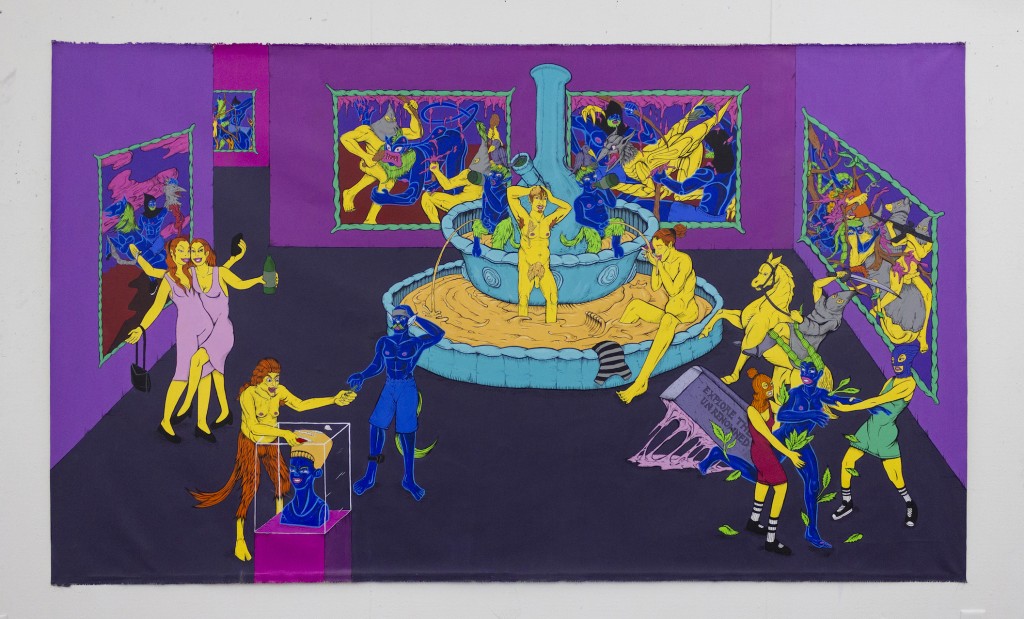 “A painting needs to be experiential to capture a sense of awe, that sublime wonderment that causes someone to pause and invest time in the work,” Cisneros says. “That can arise from the amount of detail and manipulation of the material. Though a painting that makes a statement, whether didactic or nuanced, drives me to tell stories with my images.”

Violent By Design Parade seems like it has to be the culmination of the series as is represented here, not only because it is the only 2021 piece in the series, but because it raises the bar yet again. Cisneros says his understanding of color theory has expanded since returning to college, and that’s evident here. The sense of place here is the most successful thus far. The color has a great strategy conveying nighttime using a great range of colors.

The oxidized copper green buildings in the background feel like they are at the end of golden hour through smart deployment of yellow on one side, the perfect subtle fading highlight. The blue figures celebrate a victory, passing a jester crashing a Mickey’s cart while a foreground figure tips its top hat revealing purple pigeons in place of a head. That might be my favorite moment… in THIS room. 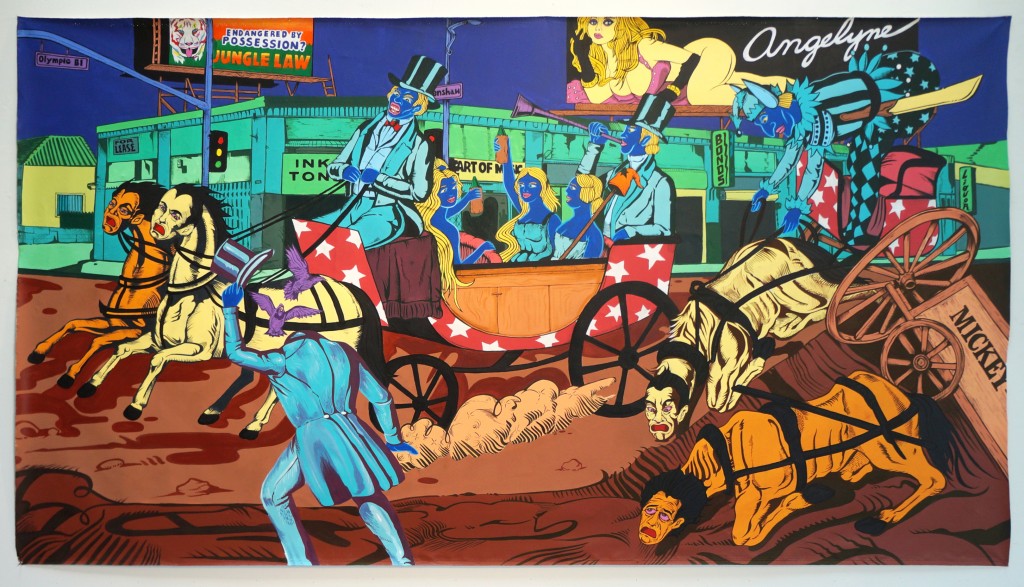 Slauson Ave. Bacchanal is the lone black and white piece in this room, with the Opie Gallery having more two more. It is a great composition, theatrical in black and white with a visual immediacy. “While working on my full-color pieces, I began a second body of work that is black and white,” Cisneros says. “I consider them my way of “having dessert first.”

There are two couples dancing to a song by robed skeletons, with a black entertainer deep dipping a white woman. The central figure action helps lead your eyes around the frame to the performers. The skeleton’s robes have the most enjoyable and intense mark-making in almost an etching style of line shading. “My most cathartic part of my process is near the end of a painting when I introduce a fury of precise lines that define the compositions. The black and white paintings get right to those flourishes.” 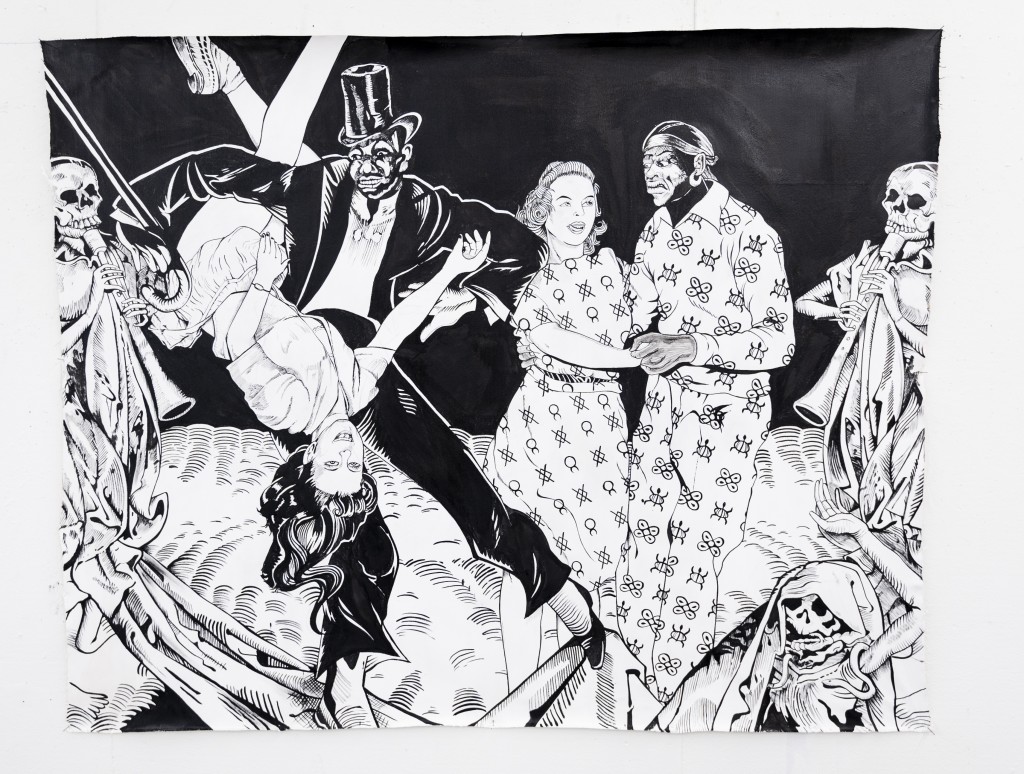 There is an entire other show featuring seven more large works. “Violent By Design” continues at The Leedy Voulkos Art Center’s Opie Gallery through May 29th. The gallery has ample space for safely social distant viewing and is open Thursdays – Sundays from 11-5, with the show having one more First Friday night as well. There is some decent time left, make it a point to see both if this reaches you in time, or at least the work in Opie Gallery.

A triumvirate of big black and white pieces and four-color pieces that are all notably more vertical than the landscape-dominant selections at HabitatKC. Afro Venetians is probably my favorite of all the black and white pieces with its rough Raymond Pettibon-type beat brushstrokes. “Cool Runnings 2” is deftly painted and seems guided by Cisneros embrace of dark humor. It will catch you at the west end of the Opie Gallery.

Across the work in his show(s) Violent by Design, Nehemiah Cisneros puts in the work to earn the sense of wonder he wants his viewers to experience. All you have to do is show up.

KCAI End of the Semester Exhibition and Sale, coming to a computer near you