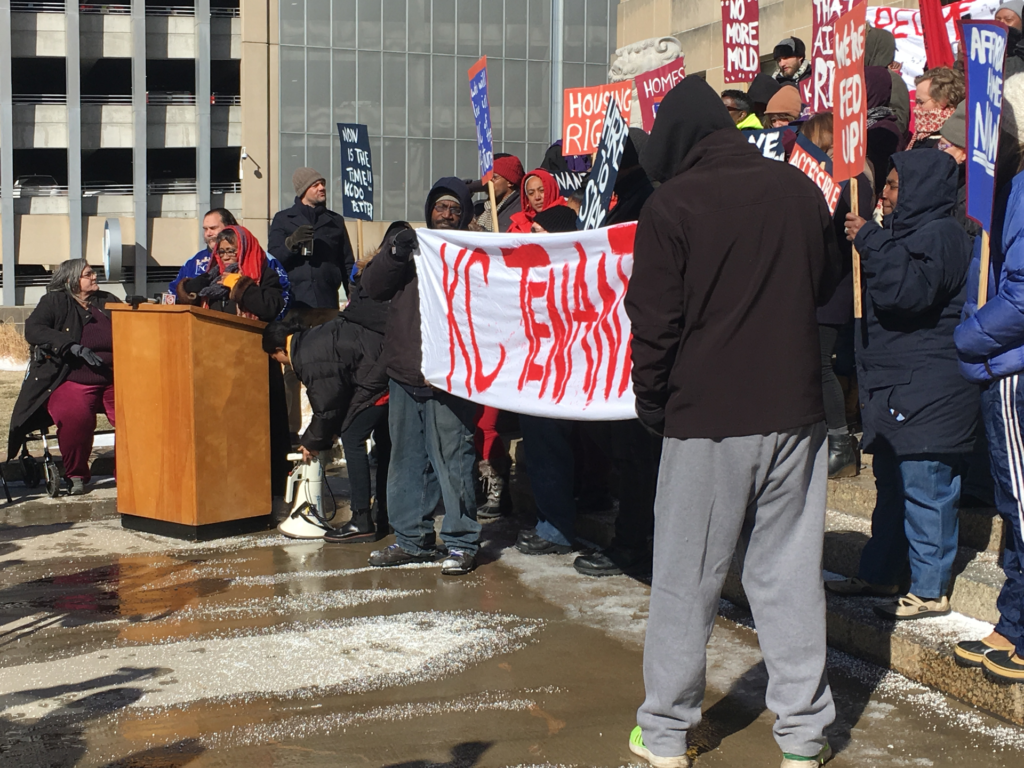 The demonstration was also an introduction of sorts — the launch of KC Tenants, a new grassroots organization advocating for better affordable housing options in Kansas City.

Each day, approximately 42 people are evicted from their homes in Kansas City. Last year, a study commissioned by the city found that the majority of households making less than $35,000 a year spend more than the recommended 30 percent of their income on housing.

Low-income residents in the city not only struggle to find affordable housing, but often live in poor conditions with abusive landlords. Brandy Granados, a single-mother and member of KC Tenants, says she was called a “dumb female” by her landlord last December when she tried to explain problems with her heater. The gas company had previously identified a gas leak coming from the heater in Granados’s Northeast Kansas City home, and city codes enforcements gave her landlord two days to fix the heater. But according to Granados, it still wasn’t fixed three weeks later. When her landlord did come to fix the heater, it soon broke again, and Granados had to call him back to the house.

“I broke down and asked him what would happen if something exploded or caught on fire,” Granados said. “He looked at me in the eyes and told me, ‘Your family can sue if you die.’”

Now, Granados’s landlord is in the process of evicting her. She says it’s “clear that he’s retaliating against me for calling codes.”

Tiana Caldwell, another member of KC Tenants, told the crowd that she was diagnosed with ovarian cancer for the second time last spring. Soon unable to work to afford rent, Caldwell and her husband and son, were evicted from their home in the fall.

With an eviction record, the Caldwells had difficulty finding a place they were allowed to rent. When the family finally did find housing, sewage poured from the pipes in the shower the first night after they moved in. After the property manager wouldn’t return their calls, Caldwell called the health department, which deemed the home uninhabitable. The Caldwells have since been living in a hotel.

“I grew up poor, strike one,” said Caldwell. “I’m a black woman, strike two. I’ve had cancer twice, strike three. How many strikes does it take before I’m out?”

Caldwell and Granados were also joined by KCPS Superintendent Dr. Mark Bedell who highlighted the prevalence of homeless and low-income students in the school district, and by Tania Taylor, who has been on unpaid family-medical leave caring for her daughter who was shot in the head in October 2018. Taylor currently has her house packed up and ready to go because her landlord keeps threatening to evict her.

KC Tenants introduced its People’s Housing Platform at the rally, demanding the city pass ordinances for tenant protections, emphasize public funding for affordable housing — you can see what the current mayoral candidates stand on funding for affordable housing here — regulate the market with solutions like rent control, and implement structural reform such as banning campaign contributors from sitting on zoning boards and development committees.

“Housing needs to be the next mayor’s airport,” said Caldwell. “If big downtown developers are worth hundreds of millions, we are worth more.”