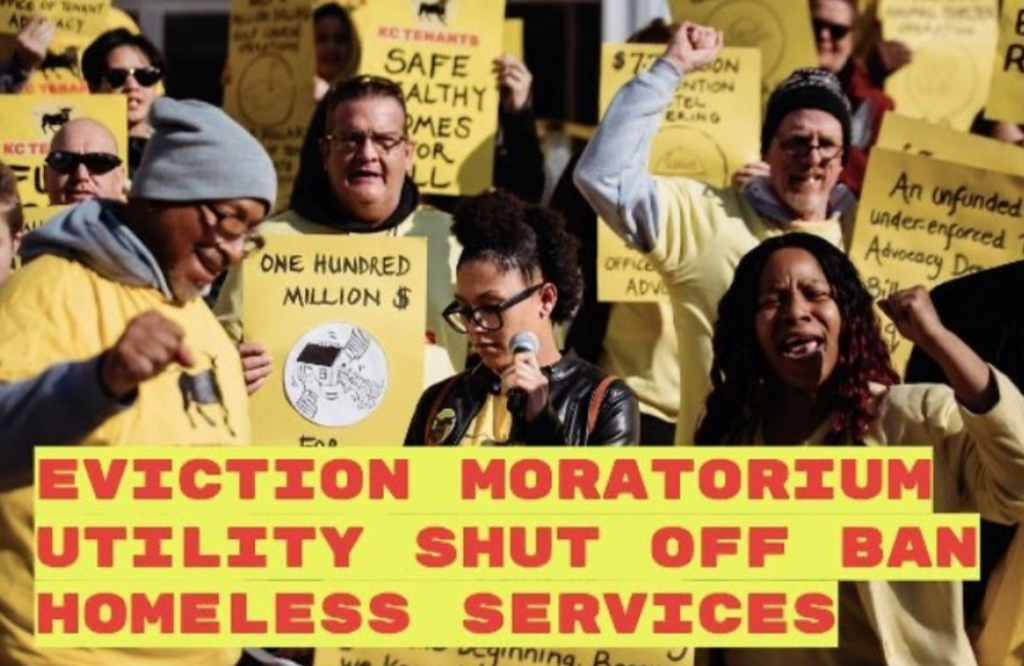 Over the next four months, it’s predicted that 243,000 evictions will be filed across the state as a result of the job loss and lack of government protections throughout the pandemic.

Jackson County’s moratorium for evictions expired on May 31 and around 1,000 evictions have been heard by the courts since. Some hearings occur at the courthouse, putting people at risk to COVID-19. Others happen through a teleconference, which according to a press release sent out by KC Tenants, is a violation of due process as it’s inaccessible to those without internet or phones. As is the case with most evictions, it’s filled with Black and brown neighborhoods, reinforcing decades of racial inequalities.

The press release states the evictions are a death notice for the most vulnerable neighbors as it’s a fundamentally traumatic event, both a cause and a condition of poverty. The pandemic makes things much worse, as some will move into motels, shelters, their cars, and double up in other housing units, while others will end up in the streets. All of these conditions and circumstances pose great risks to people, especially as COVID-19 cases continue to rise at an alarming rate.

KC Tenants posted updates of its rally on its social media pages, where organizers spoke about the injustices facing the community. Protestors disrupted courthouse proceedings and jammed the virtual court with repeated phone calls. The calls continued until the virtual courts were shut down, ensuring that no more cases could be heard for the day.

Chants of “end evictions or people die” were heard in the courthouse and a banner was dropped on a building downtown.

Two of their members were arrested and transferred to Jackson County Corrections facility. The organization released a statement from one of the members arrested on its Twitter, which can be read here.

**UPDATE 4:30 pm: Our eviction disruptors, our freedom fighters, are FREE. **UPDATE 10:30 am: 2 of our freedom fighters have been arrested and are being transferred to Jackson county corrections on 13th and locust!!! We are mobilizing to the jail now. Show up for support! Bring yourself, a friend, masks, phone chargers, water, snacks, an umbrella or two!END EVICTIONS OR PEOPLE DIE @ JACKSON COUNTY COURT HOUSE