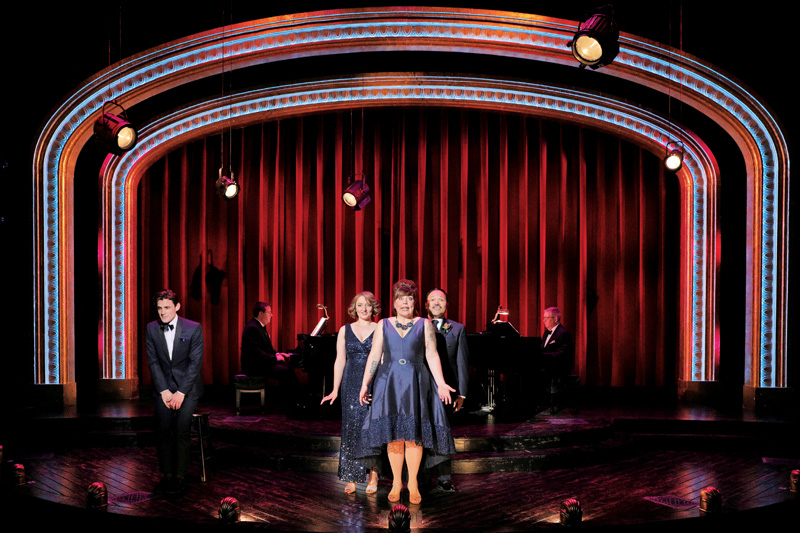 Side by Side by Sondheim is a departure from Kansas City Repertory Theatre’s typical lineup — in fact, the musical revue is a replacement for a “brand new” musical previously intended for this midwinter slot. Instead, artistic director Eric Rosen announced “a dazzling and unforgettable night” of Stephen Sondheim works.

On the “glittering evening of music, comedy, and song” (say press materials), Rosen delivers. While lacking the intimacy of Quality Hill Playhouse, which produced Side by Side by Sondheim in 2006 (and has made musical revue its specialty), or the depth of Musical Theater Heritage (which expertly footnotes its performances with background and context), this Rep show, which Rosen directs, presents its own strengths (if not the appearance of more-than-qualified local talent).

As always, the Rep’s production values impress. With a double proscenium bedazzled in an array of changing colors and a luxurious red-curtain backdrop that opens to a projection scrim (scenic design by Jack Magaw), Side by Side aims to be less cozy cabaret and more Vegas nightclub.

Developed in the mid-1970s (and nominated in 1976 for three Tonys, including Best Musical), Side by Side doesn’t reflect Sondheim’s later accomplishments — Sweeney Todd, Sunday in the Park With George, Into the Woods, and Assassins, to name a few. But it does feature rich, funny and pithy material from the likes of Gypsy, A Funny Thing Happened on the Way to the Forum, A Little Night Music, Company and Follies, plus lesser-known shows, and songs ultimately scrapped from final scripts.

Sondheim was writing musical theater by the time he was a teenager, and he had the good fortune of knowing Oscar Hammerstein II, who mentored him. By his late 20s, he was writing lyrics for Leonard Bernstein’s West Side Story, which debuted in ’57. Side by Side features songs — most with Sondheim’s melodies, some with music by other composers — on the subjects of relationships, sex, marriage “and its dysfunctions,” and the range of human emotions.

The lighter pieces here entertain more than the deeper ones move, pulled as they are from the confines of their respective shows for performance in quick succession. Cast members take turns at bits of narrative designed to connect the parts, but the segues sometimes fall short. (We’re told that Anyone Can Whistle was controversial for the early 1960s but given no clarifying explanation.)

Side by Side’s four polished and able actor-singers — Jenny Ashman, Shanna Jones, Orville Mendoza and Oliver Thornton — glimmer as individuals more than as an ensemble, and they take their gloves off in Act 2. Appearing at the center of the small stage are music director Anthony T. Edwards and assistant music director Daniel Doss at facing pianos, their dynamic and virtuosic playing no mere background but instead a co-starring role.

Though some songs in Act 1 feel over-choreographed (they simply don’t need the added theatrics), many of the revue’s numbers stand out from the evening’s lengthy repertoire. (Cory Pattak’s lighting design effectively punctuates performances, and Sarah Beers’ cocktail attire, especially the glittery dresses, adds to the party atmosphere.) An incomplete list of highlights includes “Getting Married Today” and “The Boy From…” (featuring Jones and her keen comic sense), “You Must Meet My Wife,” “Another Hundred People,” “The Little Things You Do Together,” “Can That Boy Foxtrot,” “Could I Leave You?”, “Broadway Baby,” “You Gotta Get a Gimmick” (Ashman’s “bump it with a trumpet” and Jones’ baton-twirling), and, well, everything from West Side Story.

Sondheim always warrants the spotlight, and even an imperfect show devoted to half of his career is a worthwhile venture — and a welcome, if shallow, diversion.

Side by Side by Sondheim