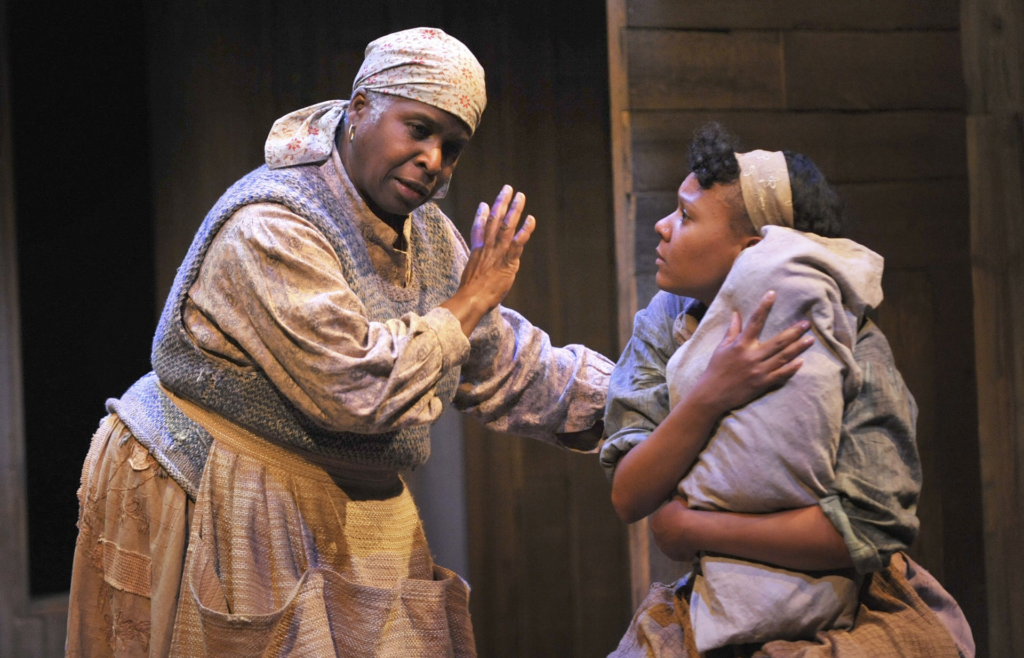 In different circumstances, young Harriet Jacobs, bookish and dreamy, might have spent her days wandering meadows with book in hand, lost in musings. But Jacobs was born into slavery in the Deep South, exactly 50 years before the Emancipation Proclamation. Language was her pleasure and consolation, but it was also her peril: Literacy was illegal for slaves in the antebellum South, a crime punishable by death.

Yet despite the risk, young Harriet persisted in her love of literature: reading in ­secret, savoring sentences, losing herself in the beauty of storytelling. Nietzsche’s line that “We have art so that we do not die of reality” could well have been written of her. It was art that helped her survive the horrific realities of slavery.

The brilliance of Lydia Diamond’s play is the way it functions as a working metaphor for Jacobs’ soaring, irrepressible imagination and the crucial role of art in her life. The play’s ingenious leaps and compressions and masterful uses of staging devices allow the audience to face its difficult subject. Diamond’s script is well-served by the Kansas City Repertory Theatre, which marshals its resources to mount an extraordinary production, under Jessica Thebus’ bold, creative direction.

Thebus begins the play with two men pushing back the heavy wooden “curtains” of the stage. The gesture is an iconic one: The image of men’s powerful bodies at work is an important motif. Revealed is Collette Pollard’s incredible set, built entirely of the same wooden beams. A windowed wall separates interior and exterior, white world and slave world, house slave and field slave. Against this backdrop, the production is nearly bare, an effective choice in a play about the triumph of spirit over flesh, and one that encourages the audience to visualize the unseen, as
Harriet so often did.

A skillfully interwoven tapestry of tableaux­ vivants, songs and monologues, Harriet­
Jacobs unfolds as a series of vignettes in which stagecraft conveys at least as much as dialogue, making for lively, pithy storytelling. As the coldblooded scope of slavery is dramatized with nearly unbearable vividness in the foreground, Jeffrey Cady’s luminous projections bloom in the background, manifesting the beauty and imagination of Harriet’s inner world.

The diminutive Nambi Kelley makes an appealing Harriet of outsized spirit and ability. Phillip James Brannon’s Tom is a man any girl would fall in love with, while Gilbert Glenn Brown makes the allure of Samuel Treadwell Sawyer very real. David Fonteno is riveting as the charmingly sadistic Dr. Norcom, while Cheryl Lynn Bruce’s Grandma anchors the production with her steady warmth and toughness. The cast is superb throughout, but Ronica Reddick deserves special praise for the quicksilver nuances that she brings to Mistress Norcom’s hauteur, cruelty and despair.

All but Kelley play multiple roles, often in monologues that show the heartbreaking spectrum of the slavery experience but most astonishingly as the white oppressors themselves. In yet another example of this production’s keen artfulness, these characters are distinguished by Jeremy W. Floyd’s stylized period costumes of dazzling white.

The autobiography that Jacobs wrote in middle age, Incidents From the Life of a Slave Girl, details one of the worst atrocities visited on slave girls: the sexual predation of white men. In Harriet’s case, the threat came from her master, Dr. Norcom, whose menacing interest began when she was very young and grew into obsession over time. When her resistance to his advances angered him enough that he threatened to sell her young children deeper south, Harriet knew that she had to run. For seven years, she hid in a tiny attic above her grandmother’s shed, before finally escaping north to freedom.

This period of hiding takes up much of the second act. While Kelley does an excellent job of depicting the mental and physical suffering that Harriet experienced in isolation (greatly aided by the scenic and projection designs), the static situation inevitably loses some theatrical energy.

When Harriet emerges from the attic, the story rushes to denouement, relying on
Kelley to cover decades of action through summarizing monologues. Harriet’s sprightliness and irrepressible smile begin to feel jarringly one-note.

Yes, we understand that Harriet’s defiant denial offers a necessary anesthetic from the horrors she saw, but there is a problematic disconnect when the horrors are happening
directly to her and her loved ones. Without darker shadings and glimpses of the truth behind the bravura, the sameness of her responses numbs the audience’s responses as well.

These are minor shortcomings, however, in a production of vision and power. When Thebus revisits the opening motif of the men’s strong bodies pushing aside walls, it is a well-earned and glorious return. The final image reminds us what Harriet Jacobs knew well: Beauty stings more sharply than pain.