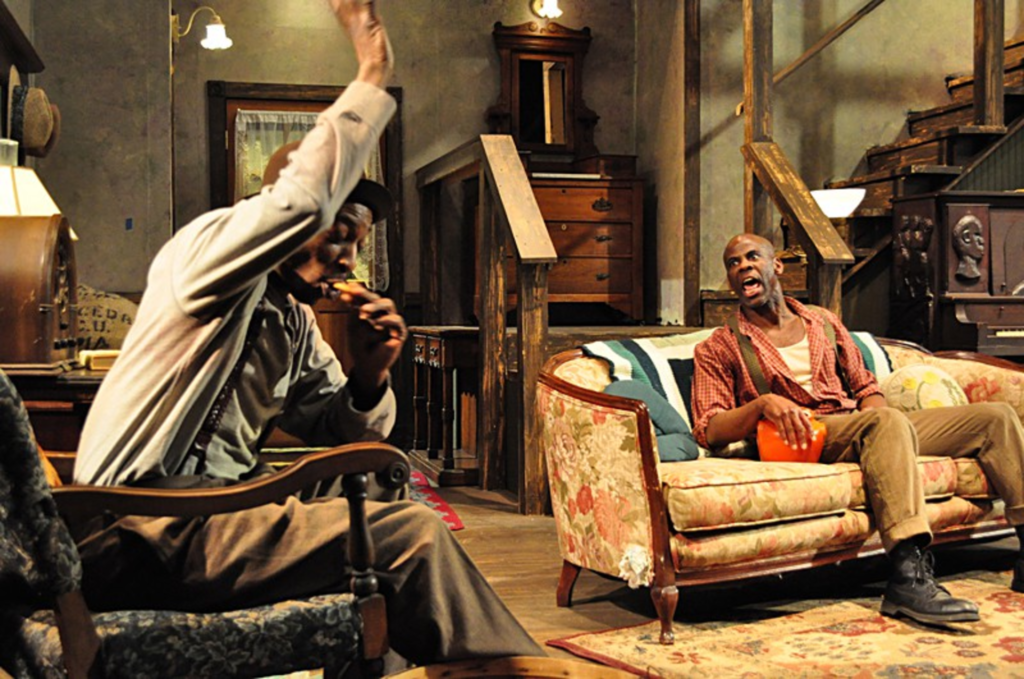 Like the small-town community-center room in which it is set, Annie Baker’s Obie Award-winning Circle Mirror Transformation seems a modest and unassuming affair. There is no high-concept premise, no intriguing instigation, no razzle-dazzle, no big reveal. Dialogue stutters, and action sputters. The fragmentary scenes end too short or go too long, and there are moments when one wonders, along with sullen teenager Lauren, whether there is ever going to be “any real acting.”

But as surely as Jell-O transforms from viscous liquid to quivering solid, Circle Mirror coheres before our eyes, capturing in its gemlike glow our 21st-century pursuit of connection and transcendence. Minimal and daring, the oddball comedy strips itself to a basic question: Can we be better people?

The play at Kansas City Repertory Theatre opens with the five members of an adult acting class. They’re all strewn across the floor in the first of many exercises that promote esprit de corps and self-discovery but also allow for weird lulls, awkwardness, vague yet overblown expectations, and slights perceived and real. The four students and their well-intentioned teacher, Marty, are creatures of our age — all loose ends and raw nerves, earnest and damaged, tortured by self-consciousness, obligated by enlightenment, taunted by serenity. They misunderstand and misinterpret, overshare and overproject, betray and disappoint, launch inappropriate overtures, commit unintentional indiscretions.

The sharply observant Baker rambles fearlessly, her play abuzz with contemporary anxieties and affectations (a three-legged cat named Coltrane). Her portrait of the era is well-served by Meghan Raham’s set design, which approaches conceptual art in its subtlety and restraint, and by Megan Turek’s costumes, which are hilarious in their sociological precision. I had to fight a chuckle every time Mark Robbins kicked off his man clogs.

Director Kyle Hatley conducts this tone poem with perfect timing and an ear pitched to comedic overtones, re-creating a drama-class atmosphere of heightened intensity, judgment and vulnerability that is excruciating — and excruciatingly funny. His well-tuned ensemble harmonizes admirably, with Kim Stauffer’s Theresa like a bright and showy string instrument, Mark Robbins’ James like dependable brass, and Tom Aulino’s Schultz a comical, mournful woodwind — oboe, maybe, or bassoon. Izzie Baldwin’s Lauren is the tympani, reticent until she gets to give the final boom.

As for the soloist, Lee Roy Rogers, as Marty, gives an impassioned and minutely detailed performance, delineating the lines where the teacher’s compassion blurs into defensiveness, where her best intentions dissolve in exasperation and her strained conscientiousness takes flight toward genuine higher being. We know and recognize this character. We try to be decent and attentive, and we fail. That is the human comedy. And yet, Circle Mirror ends on hope and sings the beauty of the susceptible heart.

The heart of Berniece, The Piano Lesson‘s history-haunted sister, has been clamped for years and shuts up tighter when her brother, Boy Willie, descends unexpectedly on the Pittsburgh home she shares with their uncle, Doaker and her daughter, Maretha.

Where Berniece is responsible and decorous, Boy Willie and his friend Lymon (both recently freed from prison) are brash, fun-loving ne’er-do-wells, bursting with enthusiasm and schemes and news. The most salient news is the death of the last of the Sutters, a family that, for generations, owned slaves back in Mississippi. Now the Sutter land is for sale, and Boy Willie has a plan to buy it for himself. It’s an audacious and poetically just ambition: to stand as an equal alongside former slaveholding neighbors and farm the very land that, a few generations before, his own family worked as slaves. But Berniece, whose cooperation is necessary, will hear none of it.

The Metropolitan Ensemble Theatre is ablaze with talent in this virtuosic production of August Wilson’s Depression-era drama. Foremost is the stunning Mykel Hill, an
actor so charismatic, it’s hard to tear one’s eyes away. He etches an indelible portrait of Boy Willie as a man chasing dreams but weighed down by the past. Desmond Jones’ country rube Lymon provides appreciated sweetness and humor. Harvey Williams gives genial Doaker dark notes as the carrier of the family’s secrets. Theodore Hughes slips in interesting diminished triads as Berniece’s beau, Avery, and the marvelous Ronald McFadden (of the locally famous McFadden Brothers) galvanizes every time he appears.

When all are onstage at once, it’s hard to know where to look, especially the glorious moments when, as befits a play of this title, they erupt into song — rousing, perversely catchy ditties from their railroad, plantation and prison-farm pasts.

The Piano Lesson isn’t a perfect play. The dialogue can feel overworked and repetitive, and the conflict between Boy Willie and Berniece — between tradition and possibility — revisited too insistently. But Wilson’s characters are extraordinarily rich, and his metaphors resonate here in all their power: the truck piled with ripe watermelon, the silk chartreuse suit (one of Atif Rome’s great costumes) and, most of all, the beautifully carved piano that Berniece insists is the family’s most valuable legacy.

Director Karen Paisley stages a vigorous production, assisted by Jay Akin’s efficient stage management, and her uncredited scene design is exactly right. I didn’t think anything could get me to buy the play’s hasty, poltergeist-ex-machina resolution, but Donna Miller’s fabulous sound design and the irresistible cast got me awfully close. This Piano Lesson doesn’t hit a wrong note.