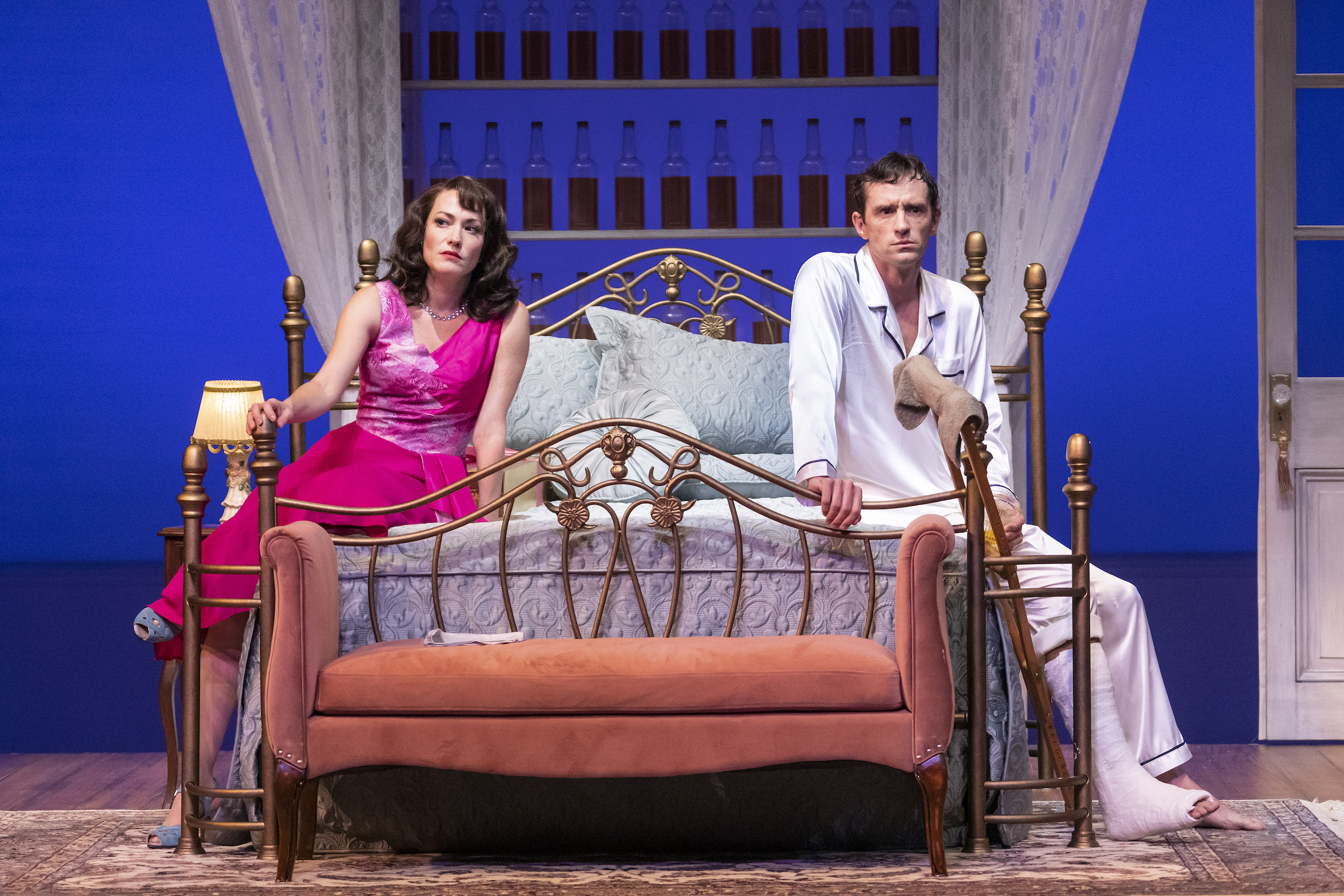 An effusion of talk and words bombard us each day, a virtual thicket of missives to wade our way through.

In Cat on a Hot Tin Roof, Tennessee Williams’ Pulitzer Prize-winning play that opens the season at Kansas City Repertory Theatre, there’s no dearth of talk and words among his characters, who seek meaning or connection—or, perhaps, just solitude and quiet. Williams revised the 1955 drama (striking period outfits by costume designer Theresa Squire) in 1974, and that version, directed here by Lisa Rothe, is an absorbing production, realized with impressive performances by a talented cast.

The three-act play occurs over one summer evening, Big Daddy’s 65th birthday celebration. And it all takes place in the bedroom (and its immediate environs) of a large plantation house. Big Daddy (Paul Vincent O’Connor) owns the prosperous 28,000-acre cotton estate in the Mississippi Delta, and the family has gathered. Because he’s been sick of late, the fact of his wealth isn’t lost on potential heirs: son Brick (Nathan Darrow) and his wife, Maggie (Vanessa Severo); son Gooper (Darren Kennedy), and his wife, Mae (Amy Attaway). These family members, like any other clan, have their competing interests and personal struggles.

The play doesn’t focus only on familial maneuverings but on relationships as well—with one another and with themselves. “The odor of mendacity is a powerful and obnoxious odor,” says Big Daddy, who attributes his ill health to “lies and liars that I have had to put up with, and all the goddam hypocrisy that I lived with.” It’s a deeply psychological work—this is Tennessee Williams, after all—and it’s a moving one, drawing us in over its three and a half hours. (Running time officially is two hours and 50 minutes, with two intermissions, but on opening night it went long.) We don’t notice the time going by, just the change in light (lighting design by Cecilia Durbin) as the story progresses, from dusk to night.

It begins with Maggie and Brick, a young married couple having problems. Maggie talks and talks and talks in Act 1, in a one-sided running commentary that draws infrequent but biting remarks from her spouse. Maggie likens herself to a cat on a hot tin roof—restless, nervous, holding on. That their marriage has hit a rough patch may be an understatement. Brick prefers to sleep alone in a chair. And he drinks continually—Darrow must be well-hydrated by the end of the show—as he aspires to the “click” in his head that brings him solace. The back wall of their comfortably appointed room resembles the shelves of a well-stocked, high-end bar (set design by Lee Savage). The clinking of ice in nearby theatergoers’ drinking glasses gave off the effect of surround sound.

“Living with someone you love can be lonelier than living entirely alone, if the one that you love doesn’t love you,” Maggie says; Brick responds, “Would you like to live alone, Maggie?” Having broken his foot in the wee hours the previous night on the high school track, the former college football star and sports announcer is in a cast, and he hobbles about on one foot. At one point, he tries hitting Maggie with his crutch.

Through Williams’ layered dialogue, these characters lash out at, pull back from, or reach across to one another, as they confront or avoid their illusions, ambitions, and individual truths. This is especially true for Brick, who can’t come to terms with himself or his actions.

“Something’s not right,” Big Mama (Merle Moores) tells Maggie. “You’re childless, and my son drinks.” Gooper and Mae have five “no-neck monsters,” as Maggie calls them, with a sixth on the way. But even Big Mama has marital sorrows. Big Daddy confides in Brick that he’s made love for 40-some years to a wife he hasn’t liked.

“Communication is awful hard between people,” Brick tells his father, as they attempt meaningful conversation in the play’s second act. Darrow’s work with O’Connor in this section of the show captivates the audience. An accomplished actor, O’Connor’s sometimes harsh and misogynist patriarch has a commanding presence, as well as a palpable vulnerability, as a man facing his mortality. Darrow’s Brick, a sharply laconic portrayal at the start, registers deep notes as the story unfolds and as Brick unveils the pain that drives him. Darrow—of Netflix’s House of Cards and Godless and other TV fare, as well as the starring role in Heart of America Shakespeare Festival’s Hamlet in 2017—brings a quiet power to the role, and even nuance to his increasing inebriation.

Severo slides into the persona of Maggie with the silky smoothness of her character’s Act 1 slip, inhabiting the character so completely that I ultimately lost sight of the actress and saw only Maggie. As Big Mama, Moores rides a bumper car of emotions, in the driver’s seat one moment and getting hit the next. Hers is a strong and sometimes heart-wrenching performance.

Kennedy is very good as Gooper, the other, less loved brother, injecting idiosyncratic charisma into the smaller yet scheming role. As his obnoxious wife, Attaway raises pretense, nosiness, and family competition to new heights, loading her performance with humor and a slight cynical edge. Danny Cox, as Doctor Baugh, and Damron Russel Armstrong, as Reverend Tooker, make brief but dynamic appearances.

It’s a sober play but it isn’t without humor—more humor than I’d expect, even, given the laughter rising up from the crowd. But it’s a touching story, too, about the ways we can feel alone, about the ways we attempt, or avoid, truthful talk or self-reflection. Saying words or typing text is easy. Being honest—with ourselves and others—may be a little harder.

Cat on a Hot Tin Roof