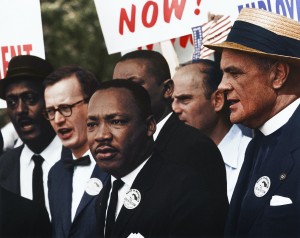 Through a unanimous vote, Kansas City is no longer the largest U.S. City without a street named in honor of Dr. Martin Luther King Jr. after a three-year battle.

“This isn’t just a trivial street naming—it’s so much bigger,” says Board Commissioner Chris Goode.

Mayor Quinton Lucas attended the packed board meeting where the vote occurred along with the city manager, elected officials, community activists, and religious leaders.

The Kansas City parks board agreed to give Blue Parkway the honor of being named after MLK. The section of Swope Parkway which merges into Volker Blvd and Blue Parkway along Brush Creek will soon be known as MLK Blvd according to Fox 4.

“Hopefully, the idea of an east-west thoroughfare named after Dr. King will open us all up to the fact that we are one city, and that we are connected and that this is a major connection,” says Parks Commission President Jack Holland.

“The Parks Board has chosen to defend and protect Black life and culture,” says SCLC of Greater Kansas City President Rev. Vernon Howard.

Protests over the murder of George Floyd created a sense of urgency to complete this project, as it had originally been proposed in April 2018. Mayor Lucas directed the Parks Board to receive public input on how to best honor King and eventually the board had over 400 different ideas to choose from.

“I am so proud that finally-finally!—we are recognizing Dr. King, I think, in one of the many ways we need to,” Lucas says.

However, some citizens are concerned the current condition of Blue Parkway is not the best way to honor Dr. King. Beautifying Blue Parkway is something the city insisted be a part of this renaming and will include a major overhaul of MLK Park.

Lucas says by improving Blue Parkway Kansas Citians are being shown no matter if you live in east or west Kansas City, you matter.

New street signs will go up within the next two weeks along the approximately seven-mile stretch.

This project comes during the week Minneapolis is mourning the murder of Daunte Wright, a 20-year-old Black man who was shot during a traffic stop by a police officer who may have intended to fire a Taser according to the city’s police chief.

“Whether it be carelessness and negligence, or a blatant modern-day lynching, the result is the same,” Johnson says. “Another Black man has died at the hands of police.”