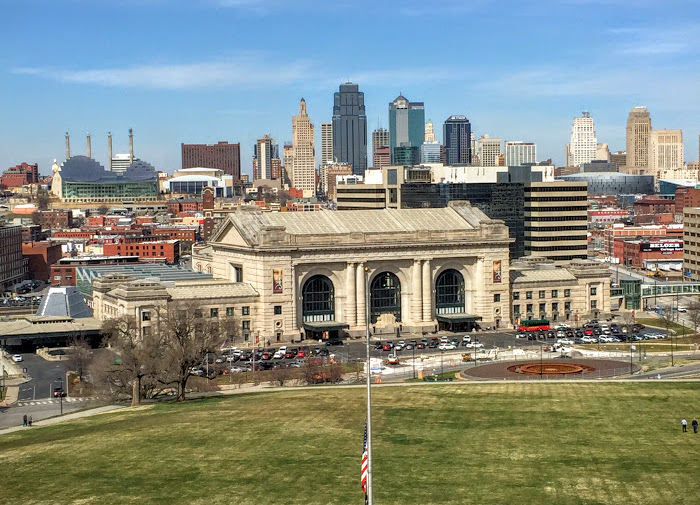 The Kansas City Police Department is investigating a possible violation of state law barring its officers and employees from engaging in political activity while on duty or in uniform. Photo of downtown Kansas City. // Photo by Jordan Bruening/Wikimedia commons

The Kansas City Police Department is conducting a criminal investigation of the Friday ride-along by former Gov. Eric Greitens as a possible violation of a 1940s law enacted to root out political corruption linked to notorious political boss Tom Pendergast.

All the department’s records surrounding the ride-along are closed because they are now part of an “ongoing criminal investigation,” Sgt. Jacob Becchina wrote Tuesday to The Independent in a response to an open records request.

Greitens, who is seeking the Republican nomination for U.S. Senate as he tries to make a political comeback, alerted supporters about the ride-alongs in two tweets Friday he has since deleted.

Greitens posted a 15-second video taken from a hand-held device telling supporters he was getting ready for his ride-along and, a few hours later, a video almost two minutes long with images of police cars and the North Patrol Division building.

“The ride along was approved by command staff at the North Patrol Division,” Becchina wrote on Monday in an email to The Independent.

Greitens was not given permission to make a video and the tweets were deleted at the request of the department, Becchina wrote.

The Kansas City Star reported that a member of the department has been placed on paid administrative leave. The department would not name the employee.

Every item requested is closed, he wrote. The Independent asked for the paperwork surrounding Greitens’ request for a ride-along, dash and body camera videos recorded while Greitens was with officers and emails from top department commanders.

A state law governing the Kansas City Police Department includes severe penalties, including possible jail time, for allowing political activity on department property. That would potentially make every aspect of Greitens’ visit a crime for the participating officers and those who approved it.

The law does not penalize political candidates or organizations if a violation occurs.

The Independent asked for clarification of why some usually open material, such as dash camera video recorded while Greitens was making his campaign video in the parking lot, was considered closed. The response made it clear that every part of Greitens visit to the patrol division headquarters is potentially evidence of a crime.

“We are very familiar with the provisions applicable to criminal investigations and what is or isn’t available,” Becchina wrote.

Under the law originally written in 1939 and existing with few changes since 1943, Kansas City police officers are forbidden from engaging in political activity on department property or participating in political events while in uniform.

The law prohibits “any solicitation for political purpose in any building or room occupied for the discharge of the official duties” of the department. It also bars employees or members of the Kansas City Board of Police Commissioners  from using “official authority or influence for the purpose of interfering with any election or any nomination for office, or affecting the result thereof.”

The criminal penalty for a violation is up to six months in jail and a fine of $50 to $500.

The professional penalty is severe. The police board is directed to hear the evidence and, if the law has been breached, the violator must be discharged “forthwith.” The chief is obligated to refer an alleged violation for prosecution “at once.”

If the board does not act, power to enforce the law is given to individual board members and members of the Kansas City Council. Any single member of either board can file a lawsuit to stop the department from paying the salary of a violator and to compel a violator’s dismissal from the force.

Any employee dismissed for a violation is barred from being an employee of the department for five years and anyone dismissed as a result of court action has no appeal to the police review board.

Pendergast was the political boss of Kansas City from 1925 to 1939. Under his influence, the police department allowed bootlegging, gambling and other organized crime to flourish. With his downfall after conviction on federal tax evasion charges, the department came under control of a Board of Police Commissioners with a majority appointed by the governor.