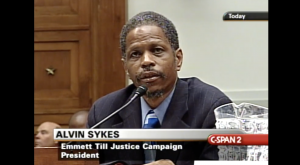 Kansas City activist Alvin Sykes, who was best known for his work in pursuing justice in unsolved civil rights murders, died Friday at 64. He passed at Merriam Gardens Healthcare and Rehabilitation in Shawnee, KS according to a facility nurse.

Sykes suffered a fall at Union Station two years ago and had suffered from acute effects ever since. The fall injured his spine giving him significant paralysis. Recently, he was diagnosed with COVID-19.

A 14-year-old woman who was a victim of rape gave birth to Sykes in July 1956. He was put in the care of a family friend when he was eight days old. His unofficial adopted mother sent him to Boys Town in Omaha, NE, a home for at-risk youth run by the catholic church, as a child which Sykes said saved him. He says he learned compassion for others and the art of governing from his time at Boys Town. The boys took on small government roles to run the community.

His early years were not easy with being a victim of sexual assault and suffering from epilepsy and mental illness. A lot of time was spent in the hospital.

Dr. Martin Luther King. Jr. was assassinated when Sykes was 12 and he said he would live a long time and become a civil rights activist.

He gained recognition after his efforts in advocating for his good friend, Kansas City saxophone player Steve Harvey, who was murdered in 1980. Sykes researched at the library to find legal grounds to challenge the court after Harvey’s brutal murder in Penn Valley Park ended in an acquittal. His findings were taken to the Justice Department and the case was reopened.

The Steve Harvey Justice Campaign was established by Sykes and over 6,000 signatures on a petition demonstrated public interest in the case. The killer was sentenced to life in prison two years later for the racially motivated murder of Steve Harvey.

Sykes changed the name of his organization to the Justice Campaign of America once the Harvey case had been adjudicated and expanded its work nationwide.

Work on the case of Emmett Till’s murder brought national, and even international, recognition for Sykes. Till, a Black 14-year-old, was beaten, mutilated, and thrown in a Mississippi river after a white woman accused him of whistling at her. An all-white Mississippi jury acquitted the killers but they later confessed to the crime and the woman admitted to falsifying her story.

Sykes was the force behind the Emmett Till Unsolved Civil Rights Crime Act which led to the formation of the FBI’s Cold Case Initiative in 2006.

“In my mind, Alvin Sykes is the premier justice advocate, civil rights freedom fighter of our generation,” Webster says.

The Kansas City Police Department reopened its investigation into the 1970 murder of politician and business owner Leon Jordan thanks to Sykes. New evidence in 2010 suggested local mobsters or their associates were involved in the murder.

Friends say Sykes was a force of nature who loved jazz, practiced Buddhism, and inspired everyone around him according to the Kansas City Star.