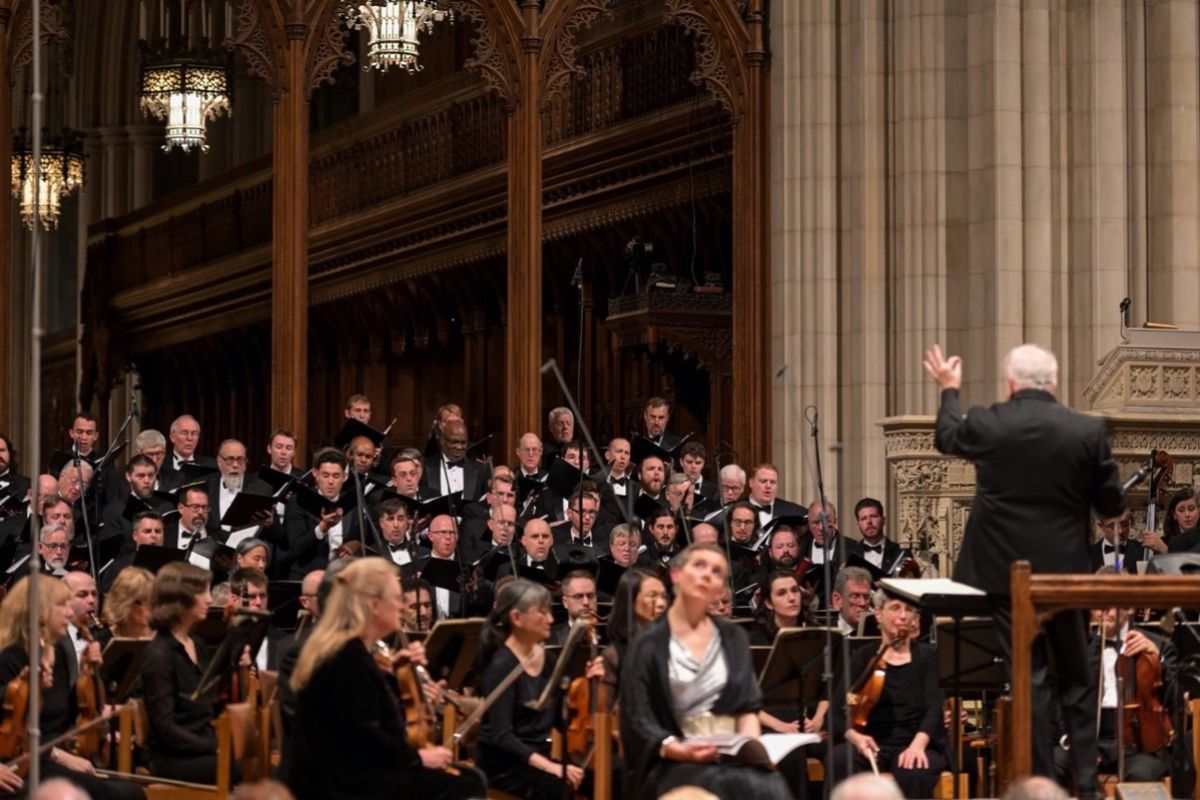 On October 21, 2018, the Kansas City Chorale, along with the Cathedral Choral Society, the Clarion Choir, Saint Tikhon Choir, and accompanied by the Orchestra of St. Luke’s, for the first time in over a century performed Alexander Kastalsky’s Requiem to commemorate the centenary of the Armistice which ended the first World War.

The massive piece was conceived as a “musical collage that would combine prayers for the dead drawn from the various liturgical traditions of the Allies – Orthodox Russia and Serbia, Roman Catholic France and Italy, and Anglican Britain.” The end result is a gorgeous work that is evocative of the major players within the Great War, while also being an emotionally-resonant musical accomplishment.

The recording of that grouping is out now from the Naxos label and debuted at number one on the Traditional Classical Billboard charts, an accomplishment on par with the staging of this concert nearly two years ago. To discuss just how this performance came to be, and how it went off, I spoke with the KC Chorale’s artistic director, Charles Bruffy.

The Pitch: How did the KC Chorale come to be part of this performance and recording of Kastalsky’s Requiem? It seems as though it’s a very large group of large groups.

Charles Bruffy: Our record producer [Blanton Alspaugh], who has produced our other Grammy-winning recordings, contacted us that the idea had come forth about the anniversary of this Requiem and that it was on the 100th anniversary of the closing of World War One. With us having the World War One monument in Kansas City, it was immediately more important to us than it might have been otherwise.

I’m aware that Kastalsky’s Requiem is somewhat obscure. Were you familiar with this piece before it was brought to you?

I was familiar with the work of Kastalsky, though not of this particular piece–recognizing it hadn’t been performed since the premiere 100 years earlier and I certainly wasn’t at the premiere performance. We were able to listen to some recordings. They were, of course, very rough but some recordings of some performances of individual works, but not the whole thing. We were able to listen to those and to look at the manuscript of the piece.

Then, we had it re-notated, if you will, so it was easier for our musicians to read in time. Of course, some of the pages were compromised, so we had to just use scholastic study and reasoning to manufacture a modern-day score.

Oh, that’s intriguing. I was not aware.

Essentially, there were certain pages of this piece that have, over the years, fallen prey to elements and a long-lasting Communist prohibition.

You couldn’t read them or they had just literally fallen apart?

In fact, in some cases, both. I was never really a part of that work but, I mean, even when the recording mics were on, we were still discussing, “Well, should that be in the basses? Should that be this pitch or that pitch?” We’d run to the manuscripts and it would just be a big smudge and we couldn’t tell which pitch it was that Kastalsky had prescribed.

Then, just listening to the sonorities and the voice leading and how the rest of the piece goes–then we just had to make some executive decisions on what our interpretation of what we thought we were seeing.

So, this is is this literally happening up to the point where the concert took place?

It was, in fact, literally happening in the live patch session after the concert.

You had already performed this hour-long work that featured four separate choirs and an entire musical ensemble and, as you go to record it, you’re still like, “Maybe we need to work on this. Maybe that was a b-flat, after all”? That’s absolutely fascinating. How do you bring multiple large ensembles together like this? Were there any rehearsals of the combined forces of you and the other groups, or are you so experienced that you can go into this and know where you are?

I don’t want to get too in the weeds about that, but we had to make all of those musicological decisions ahead of time and then be sure that everybody got that word and that they agreed with it or that–even if they didn’t agree with it–that they were going to do it that way anyway. There was some arm-wrestling early on, regarding those kinds of things.

The schedule was that we got there and had an evening rehearsal that night with [conductor Leonard Slatkin], then the next day we had a tutti rehearsal. That was just with all the choirs together, which was the first time we’d ever sung together. The next day, we had a rehearsal with the orchestra, and then, that night, I believe we had–gosh, that night was the concert and then, we had the patch session after the concert. It was pretty intense.

I can only imagine, especially considering that, while I’m sure, as a chorale, you’re used to performing music of different styles within a given performance, but given the way that Kastalsky interprets the music of different nations, it had to be difficult. “No.10 Interludium (From the direction of the Japanese troops, gentle music is heard)” is quite different from “Dies Irae.”

Yes. In a nutshell, it is quite unique and the curious thing about that is, when we sing German music, we try to sound like a German choir. When we sing Chinese music, we try to sound like a Chinese choir. When we sing Russian music, we try to sing like a Russian choir and, even though there were all of these nationalities of the Allies represented in this piece, it still would have been sung by a Russian choir that then brought in—I think the soprano originally was French and I think maybe the bass soloist was British—but anyway, they did the mixing of the Allied cultures in the representation of the character versus the representation of the singer. So, while there are the more classically Latin texts, we still sang as a Russian choir would sing those songs.