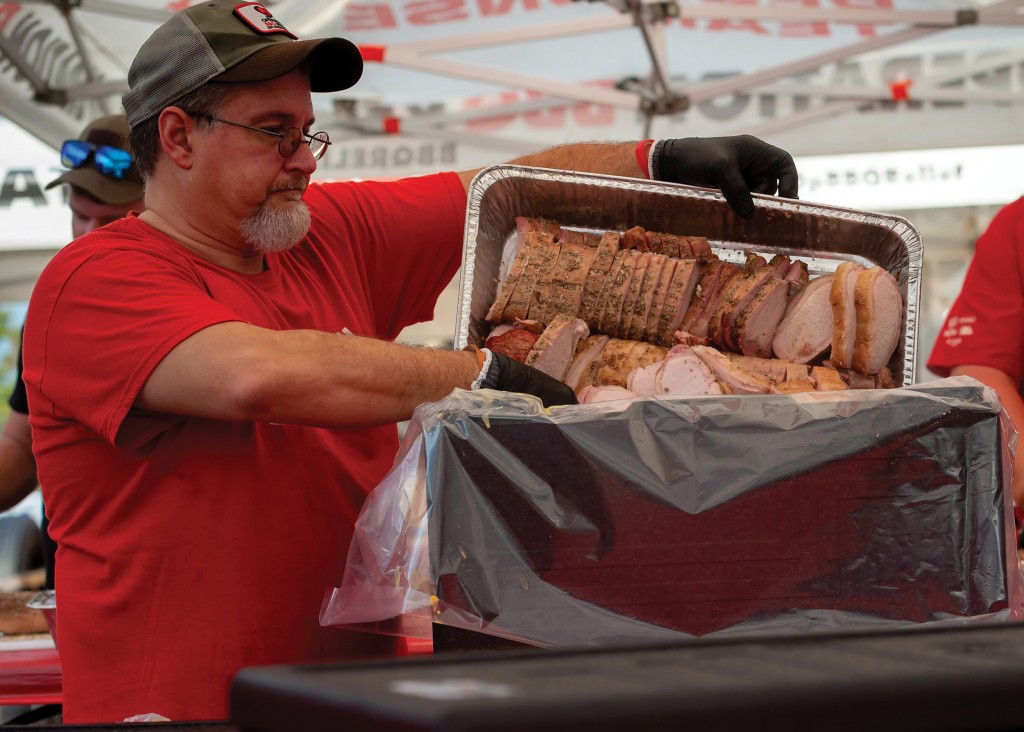 Operation BBQ Relief has provided more than 4 million meals to people affected by natural disasters in the last 10 years. Theirs might be the most Kansas City way to respond to a natural disaster.

It all started with the Joplin tornado in May 2011.

Competitive pitmaster Stan Hays (of Food Network’s Chopped Grilled Masters) was chatting with his wife before work the next morning and wondering how he could help.

“She said, ‘You should get your barbecue friends you compete with and go to Joplin. Cook as much as you can!’” Hays says.

He headed down to Joplin that day with his buddy Jeff Stith and a bunch of other barbecue competitors and judges. They stayed for 11 days, serving approximately 120,000 meals.

“By about the third or fourth day, we knew we’d found a gap that existed after major disasters happened—the need for food. The churches and civic groups that normally would rise up to do that were still trying to take care of themselves and get their feet underneath them,” Hays says.

“We figured, who better than a bunch of guys who will go set up in a parking lot to compete against each other to band together to make a difference?” 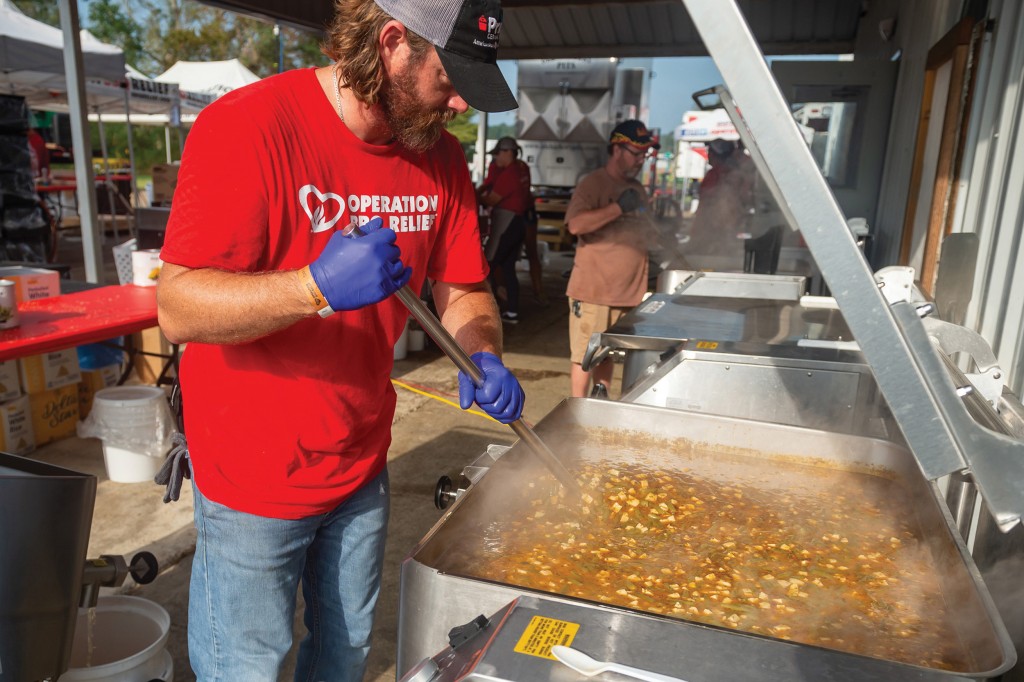 Since then, Operation BBQ Relief has gotten official 501(c)(3) status, as well as a full-time paid staff. They’ve helped out people as close as Smithville and as far away as the coasts—even the Bahamas.

In addition to a space in Peculiar, MO where they store equipment and other materials, they have refrigerated and regular storage space in Dallas. This allowed them to quickly send supplies en-route wherever they need to go.

The organization has a number of corporate sponsors who provide both monetary and in-kind donations, including Seaboard Foods, Butterball, and Farmers Insurance.

With a fleet of high-capacity propane-fueled smokers, they can start cooking up pork and turkey the same day they arrive in an area. The first few days, they’ll serve up to 2,000 meals a day while their larger setup is coming together.

By the fourth day, they might serve anywhere from five to 10,000 meals a day. In the largest disasters, the barbecue team can serve up to 30,000 meals in a day.

Although they have helped at many disaster sites that make the headlines, Hays prefers going to small, rural communities that won’t make the news.

“Their need may be much greater than these larger communities that are going to get organizations from all over the country coming to help them, and governmental declarations that help communities,” Hays says. “When you get the Smithville tornado or the Oak Grove tornado or these smaller ones that may or may not even hit national news, people may never, ever hear about it.” 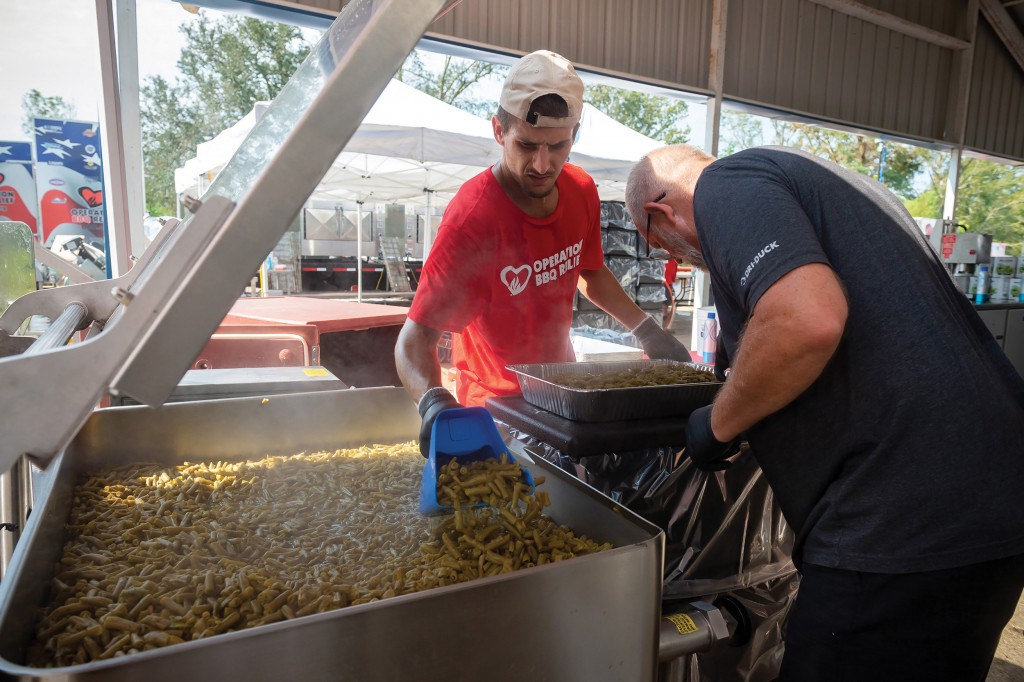 Still, Operation BBQ Relief sees itself as just a stop-gap until local organizations are able to take the reins.

Many of their volunteers are people who are retired or own their own businesses and thus have more flexible schedules. They’ve seen their volunteer numbers decrease by about half during the pandemic as older folks’ and small business participation have taken a hit.

In addition, they’ve had to make COVID-19 safety adjustments with their travel trailers. Hays compares their new bunkhouse trailers to capsule hotels, where each person has a very small but separate space to sleep.

Over the past year, they’ve also worked with local restaurants in disaster zones to produce meals because their typical field kitchen wasn’t compatible with social distancing. [As of press time, the crew was deployed to Mayfield, Ky., as a result of the December 10 tornado.]

But you don’t have to go to a disaster zone to volunteer. One or two days a week, volunteers at their warehouse in Peculiar help with fixing equipment, reloading trailers, and more.

This coming year, Hays plans to offer a number of virtual barbecue classes as part of their “Blue Sky Days” programming. They’re in the process of building a camping area at Lake of the Ozarks to offer classes and emotional healing barbecue workshops to veterans and first responders, along with their families.