“You are not alone.”

That’s the message the KC Shepherd’s Center is sending with their long-running senior companion program and the newer Phone Pal program to keep older adults happier and more engaged.

The idea behind the senior companion program is that seniors can aid other seniors living nearby. Both participants have to live in Jackson County, and there are certain income requirements. Companions aren’t there to provide in-home care—they’re there to interact with the clients for up to 30 hours per week, helping to reduce social isolation and give family caregivers a break. That might mean watching a movie, putting puzzles together, or even going out to a senior center program. 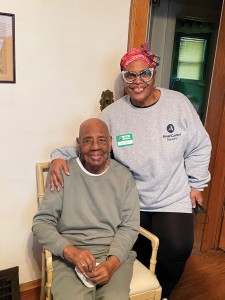 “The last few years, there’s been more research on the effects of isolation. You’re not stimulating your mind the same way. Just having that interaction with people is important to our health,” says Danielle Wootton, director of programs and strategic initiatives for the KC Shepherd’s Center.

Volunteers get a small stipend from the AmeriCorps-funded program, paid training time, and reimbursed transportation costs. The stipend does not affect any government assistance, such as Medicaid, that the volunteer may be receiving.

“They have big hearts. They want to give back, and they want to be active and engaged,” Wootton says.

Although the center had stopped recruiting new companions during the pandemic, they resumed the training program for new volunteers in June. They’re looking for both men and women who are at least 55 years old.

There are approximately 100 people on the waiting list for a companion right now, but it’s not just about numbers. The center tries to pair people who live within five miles of each other, and their personalities have to click for the relationship to work.

Geraldine Coleman has seen the program from both sides. She used to be a companion. Now she has one, and she knows what a difference it makes for both parties.

“I love people. I’ve got this hang-up. I just can’t seem to get away from people. I’m the old one now, but I love the old ones,” Coleman says. “I kind of liked the fact that it gave me the chance to get to know someone different, and gave me freedom to do things with her, but not overdo it.”

The engagement wasn’t a one-way street. Coleman learned to play dominoes and swapped recipes with her client for the two years they spent together. Her companion even helped her learn to thread a sewing machine and sew much more complicated projects than she’d ever done on her own.

After her client died, Coleman decided that she didn’t always have the energy to be a companion at 85 years old. So, she signed up to have one. 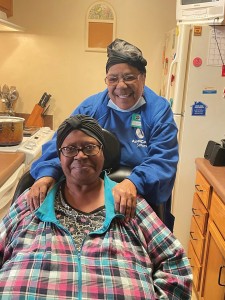 “It improves my life, I would say, a good 85%—I don’t have that down depression. We laugh and talk, and we play games, and I try to outdo her in something—it’s a thing with us,” Coleman says.

When the pandemic hit, having that in-home interaction wasn’t possible for a while. That’s when the center fired up its Phone Pals program. Volunteers call a client twice per week at a mutually agreed-upon time to check in for at least 15 minutes.

“We just saw this need with everybody being isolated and not seeing family members as much. It was something we had talked about getting started,” Wootton says.

The response was immediate. Nearly 100 people responded to their initial plea for volunteers. In contrast to the companions program, volunteers and clients for Phone Pals can come from anywhere in the metro area. Volunteers must pass a background check and turn in a log of all their client call times.

“We have one lady who likes to talk. She’s physically isolated in her home, but mentally, she is very active and engaged. She wanted someone who can talk about current events and politics. We had to find someone whose views matched up,” Wootton says.

Carly Skjervem of Fairway was looking for a way to volunteer but was limited by the pandemic and the schedule constraints of working as a nurse practitioner and having a newborn. Phone Pals was perfect for her.

“I love the opportunity to get to know someone that’s completely different than me—a different generation, someone I likely wouldn’t have met otherwise,” Skjervem says. 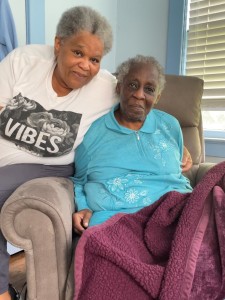 She’s been talking with her current Phone Pal since November.

“I just love hearing about how she views the world. She’s a poet, so I just feel like she has a unique perspective on life. She’s been through a lot, and I just really enjoy even hearing the small things about her week,” Skjervem says.

Despite their relationship being completely over the phone, she feels like they’ve really made a connection.

“Even though I haven’t met Christina in real life, I’m surprised by the ability to connect over the phone without knowing much about her. It’s been really easy and a warm, comforting presence—something you wouldn’t expect to find over the phone with a stranger,” Skjervem says.

That’s not unusual for Phone Pals, and it’s something Wootton thinks many people don’t expect.

“I think it’s just important for people to know it’s not just nice. It really can make the difference in someone’s life. In 30 minutes per week, you’re helping to give someone something to look forward to,” Wootton says.

For more information on how to become part of either program, visit kcshepherdscenter.org/volunteer