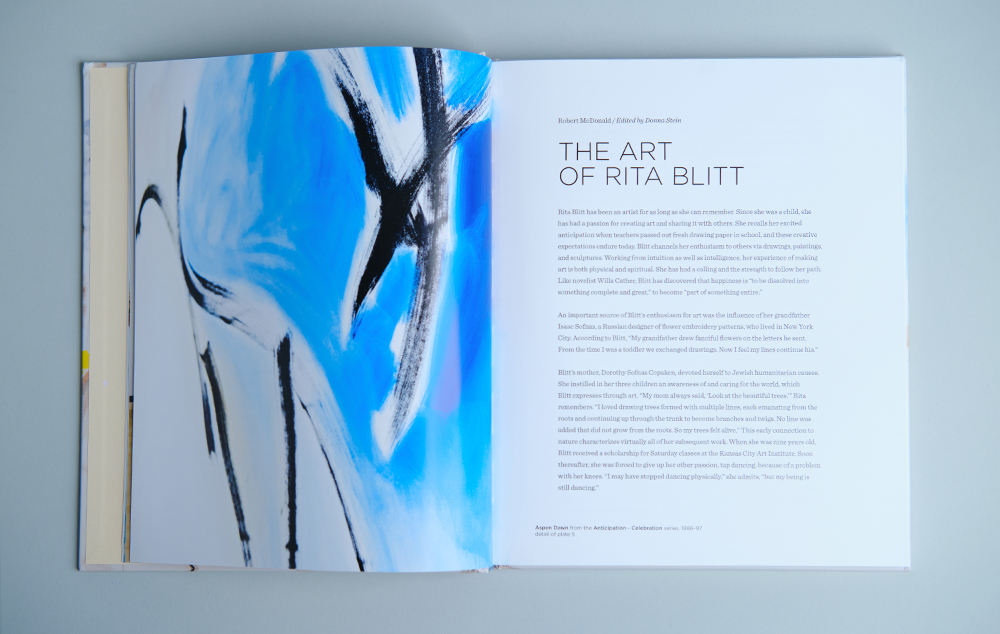 Rita Blitt: Around and Round // Courtesy of Tra Publishing.

Rita Blitt, an artist with a long legacy in Kansas City, is only a few days from the September 15th release of the Mulvane Art Museum’s “Rita Blitt: Around and Round,” a book filled with nearly 60 years of her artwork.

“The family that I’ve talked to about it said that there has to be another one, that this is only the first of the series,” she said, a smile evident in her voice.

The book, organized and edited by Connie Gibbons, pulls from Blitt’s expansive body of work from across mediums, including painting, drawing, and sculpture. Blitt was only a consultant for some arrangements in the book, but Gibbons was the one to pull from the collection that Blitt donated to the Mulvane.

“The collection I gave them is huge, and it’s like a drop in the bucket for my overall body of work,” Blitt said, and gave a nod to Gibbons for her hard work selecting pieces. She teased that although the book presents 114 photos of her art, there’s actually much, much more.

One of the most touching parts of the book is an excerpt from Blitt’s daughter Chela, where she describes growing up with a mother so dedicated to her artwork.

“She eagerly shared her love of creating—I was encouraged to draw, play music, dance—all in a way that was spontaneous and free.” Chela said in “Around and Round”.

“I thought that was just lovely,” Blitt said, of her daughter’s page. “That was Connie’s idea, she was the one that chose the writers, and then they wrote what they want.”

When asked her favorite medium, right away she identified the immediacy of drawing.

“My very favorite is the drawing, on paper, with the black line or with paint,” she said. “It’s the original inspiration, it comes from within me. So that’s what means most to me.”

Besides an illustrious career as an artist, Rita Blitt is also very passionate about the issues of climate change. As her work often relates to nature, she is fierce about its protection and points to work done by a peer in KC to combat the issues of global warming.

“It’s heartbreaking,” She said. “And I will say that my friend Jamie Metzl, who is from Kansas City, has created a movement beginning May 1st that now has over a million people signed up—OneSharedWorld. It’s to get people all over the world trying to solve and encouraging governments to create change. I think it’s quite wonderful. I’m with him all the way. What he’s done is a miracle.”

The Mulvane Art Museum’s “Rita Blitt: Around and Round” is available for purchase at this link. If you’d like to donate to OneSharedWorld’s fight against climate change, you can do so here.