KAWR hopes to make a local noise in Lawrence 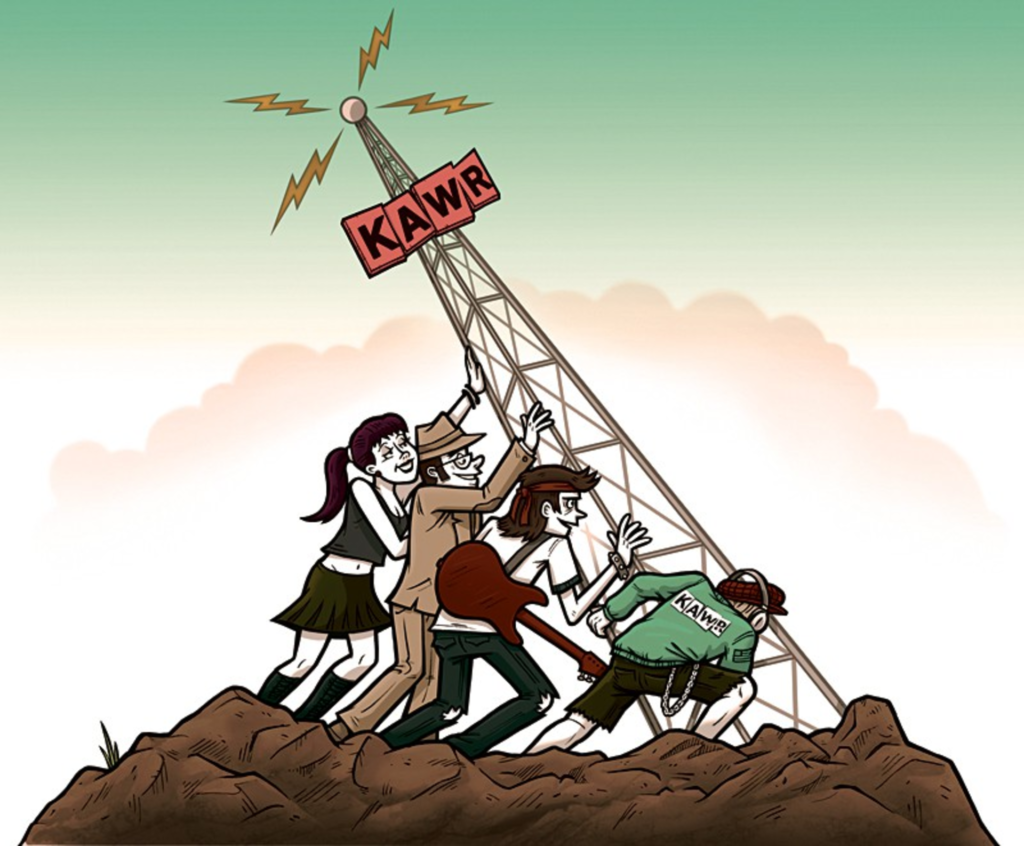 The Americana Music Academy is in a charming Victorian-style house on Massachusetts Street in Lawrence. It’s one of the many beautiful old homes lining the scenic road, and it’s remarkable for its bright-blue-and-pink façade. Inside, though, it’s clear that the house is more distinctive than the idiosyncratic paint job would suggest. Amid equipment, instruments and practice rooms, the academy is now also safe harbor for a collection of radio rebels. The space is the future home of KAWR, Lawrence’s emerging noncommercial community-radio station.

Eavesdropping on KAWR’s board is like watching the opening of a heist movie. Each member has a specific part in a grand scheme. Barry and Caroline Lee have worked for Kansas City community station KKFI 90.1 since it formed 25 years ago. Nick Dormer is a former executive staff member of the University of Kansas’ student-run radio station, KJHK 90.7, which has long been one of the few sources of local radio in Lawrence. Fernando LeFort is a Brazilian electronic engineer who doubles as KAWR’s Internet guru. Doug Davison and Malcolm Miller have local business ties, which they hope will help KAWR succeed. (Miller also hosts Liberty Hall’s monthly Midnight Movie Madness.) Kevin Kennedy takes care of the complicated stuff: commissions, grants, FCC regulations. They are united by one belief: Lawrence desperately needs a community-radio station.

“There are so many community-radio stations across the country that are really amazing and powerful voices for their communities — the fringe and the mainstream,” Kennedy says. “I’ve been in Lawrence since ’76, and that’s always been missing.”

KAWR’s organizers say their station will be different from KJHK by catering to Lawrence’s permanent population rather than KU students. The board is already collaborating with local junior high and high schools to give an outlet to teenagers involved in journalism, theater and other programs that might benefit from broadcasting and podcasting.

“If somebody is 90 years old and they want to do an opera show, this is their chance to do it,” Barry Lee says. “That’s what’s good about community radio — literally anybody can do it.”

KAWR is the spiritual successor to Kaw Radio, a beloved pirate radio station that broadcasted from Liberty Hall’s basement in the late ’90s. The station lasted about six months before the FCC brought its ax down. Some blame media groups such as National Public Radio and the National Association of Broadcasters, which actively oppose low-powered community-radio stations, for nixing grassroots efforts.

The recent passage of the Local Community Radio Act of 2010 makes it easier than ever to obtain FCC permits and licenses to start up small stations. “Local communities were starting their own stations before it [the bill] even passed because they weren’t being served by the big conglomerates,” Barry Lee says. “The conglomerates fought it for 10 years because they knew they couldn’t compete with people who really have a passion for radio. Their strictly homogenized stuff isn’t going to fly when people can hear a variety of things that aren’t on these stations.”

Though KAWR aims to be apolitical, in order to achieve the broadest range of listeners possible, its organizers’ back-to-basics groundwork is inherently progressive. “The direction of radio needs to change,” Caroline Lee says.

Support is already burgeoning within the community. Drakkar Sauna, Red Lefty, Arthur Dodge and the Horsefeathers, and Hidden Pictures have donated tracks to a fundraising compilation, RSVP: An Invitation to KAWR Community Radio. “If you’ve got a community that’s more liberally inclined, artswise, there’s always going to be support for a community-radio station,” Barry Lee says. “We think there’s going to be more than enough support for KAWR.”

And January 22 marks the kickoff of KAWR’s live fundraising efforts with a Liberty Hall event titled “Lawrence Community Radio: a Live Concert Event,” which features a diverse array of bands and other live acts. It’s more than just a concert, though. As Dormer says: “It’s going to be an invitation to the community to actively seek out the radio station as a means of community development.”

For proof that community radio can operate self-sufficiently, the board looks to Kansas City’s KKFI, which stays strong year after year. “People find out what it [KKFI] does,” Barry Lee says. “And when they find out, they’re not only going to tune in — they’re going to be loyal.” If the board raises enough money and if formal application for an FCC license goes smoothly, KAWR expects to begin broadcasting from the Americana Music Academy by June 2012. If public interest is strong enough, the station could start as early as this summer as an online stream.

“We have so much locally, we don’t need media giants to come in and entertain us,” Barry Lee says. “We can do a pretty good job entertaining ourselves.” This is the mentality that KAWR’s founders hope to bring to Lawrence: well-organized community radio with all the right permits and licenses, but with a pirate’s heart.