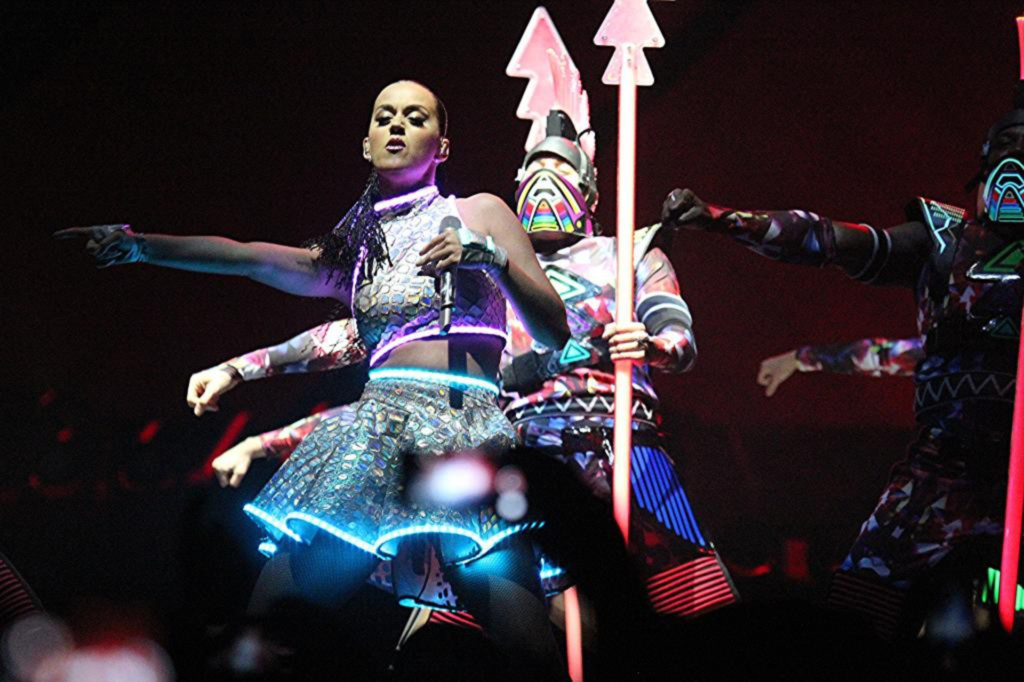 Female pop stars walk the finest of lines sometimes between sexiness and raunch, camp and excruciating silliness, and musicality and pop pleasure. Those who do it best and have stood the test of time (Madonna, Cher) have found the sweet spots in those regards. Among the younger set of pop divas, however, few walk those lines quite as well as Katy Perry. The California diva has managed to chalk up 17 Top 40 hits in her young career. She’s retained a relatively wholesome and family-friendly image despite a marriage (and divorce) to Russell Brand. In between all this, Perry has managed to maintain a sense of humor about her profession.

Last night, Perry brought that sense of humor to the Sprint Center, charming and winning over kids, parents and all-ages fans of dance music. And, personally, I would never have imagined just how much I was going to enjoy her show. 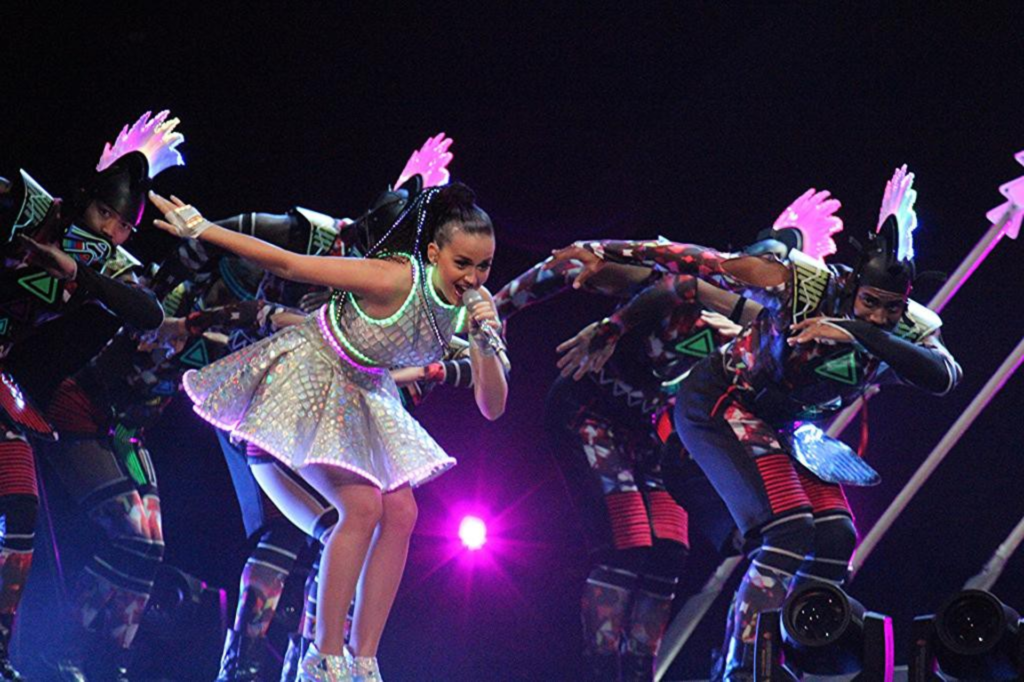 Entrances are big in the world of arena shows like this, and Perry showed up to the Sprint Center in spectacular style. After the lights dimmed, futuristic blacklight Tron-type warriors with neon mohawks and spear arrows emerged throughout the arena, brandishing their arrows at the crowd. After a few moments, the large pyramid/prism onstage split in four  to spit out smoke and eventually deliver Perry to the crowd, the pop star covered in LED lights from her long ponytail wig to the trim on her dress. She opened big with radio smash “Roar,”  immediately giving the robust crowd exactly what it came for.

Perry’s family appeal was immediately obvious. Particularly after last week’s Miley Cyrus show, it was quite a contrast to see entire families, from grandparents to small children, dancing and singing along to the pop hit, as the Tron warriors followed and guarded Perry as she made her way up and back down the triangular catwalk.

%{[ data-embed-type=”image” data-embed-id=”57150c0789121ca96b956c3f” data-embed-element=”aside” ]}%
These tours must be what the dreams of all costume and set designers are made of. The costumes of Perry and company moved from blacklight Tron Warriors to leather Egyptian (complete with Anubis-style headpieces) for “Dark Horse,” for which she was delivered to the stage on, yes, a large mohawked prop horse. During the next song, three aerialists climbed all around and swung around from a wire prism suspended high above the stage, as Perry sparkled and spun below.

Shortly after, following a long, silly animated cats-in-Hollywood montage, Perry and her dancers prowled the stage in cat costumes which looked (except for Perry’s sparkly, pink catsuit) straight off a 1980s set of the musical Cats. After a performance of “Hot N Cold,” the cats, now all donning cat fashion, including fishtank and cat food dresses, dancing and posing as they moved down the catwalk to Madonna’s “Vogue,” pushed a giant bowl of milk into the center of the crowd. Perry laid under it as the bowl was pushed over, spilling several gallons of fine glitter onto the star. It was totally ridiculous, and completely fun. 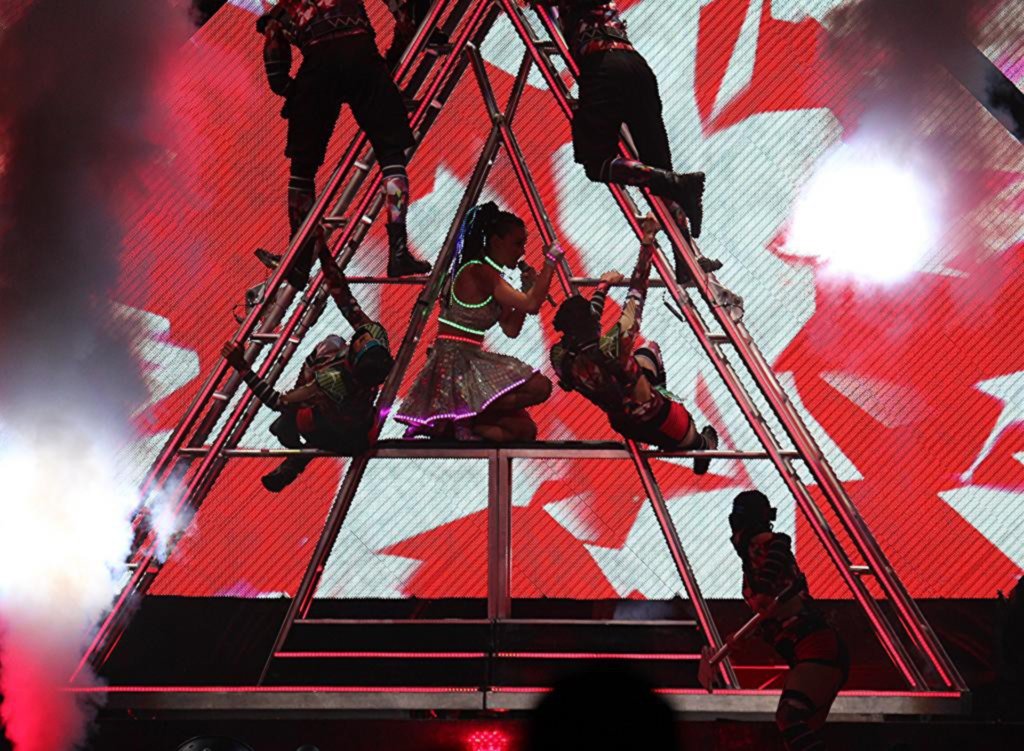 Following the cat movement was the Sunflower setup, during which Perry slowed things down. Near her huge sunflower microphone, under a huge sunflower parachute, she stopped to take a few photos with members of the crowd. She had changed to a blond wig and a long, gorgeous dress and soft, rhinestone-coated cape. She spoke to the crowd for several minutes, thanking and connecting with fans.

“We went to Schlitterbahn. We went on that ride,” she said. “Ten minutes of rules and regulations. They weigh you. They shame you. I wasn’t the lightest one. I had to go second.”  She brought a young fan (perhaps 9 years old) onstage and gave her a Minsky’s pizza. The young fan adorably thanked her mother for helping her create her costume. It was then that I noticed the little boy in the seat next to me had fallen asleep in his father’s lap, earplugs firmly lodged in his ears. In front of him, two middle-aged women downed margaritas. Next to them, a grandfather danced, knowing all of the words to the songs. Such is Perry’s appeal.

This portion of the show also permitted the surprisingly funny Perry to get briefly serious. “As you know, not everything in the past three years [since her last Sprint Center appearance] has been bubblegum and rainbow hair,” Perry said, referring to her divorce from Brand. “It was then I needed you. And you were there for me.” She then asked the audience to pull out their cellphones and alight the phones’ flashlights for her acoustic performance of “By the Grace of God.” 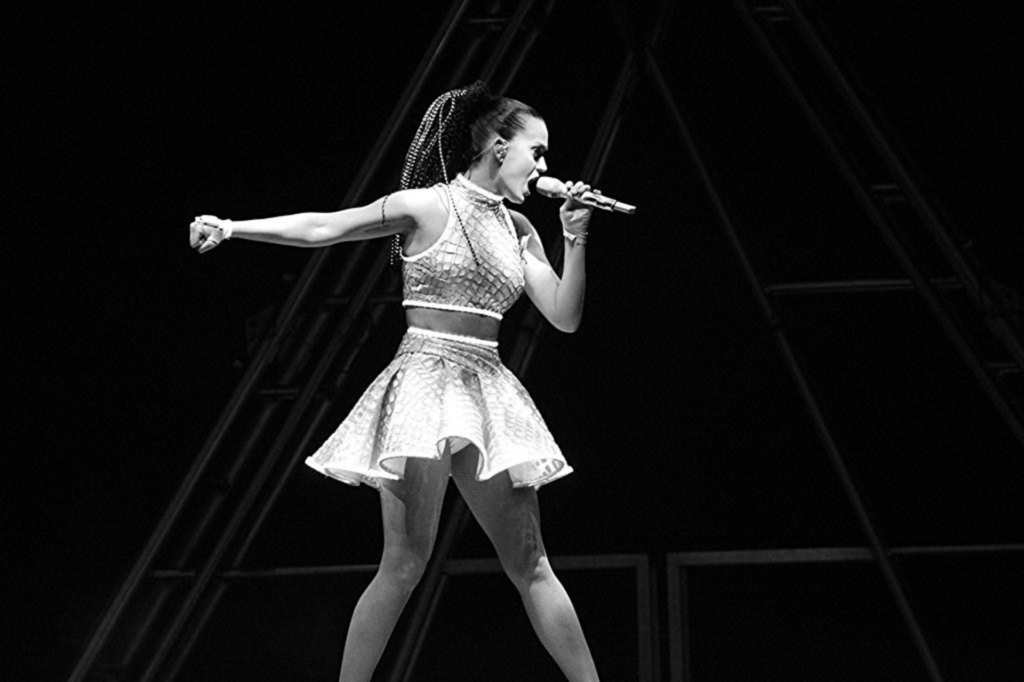 The production of this arena show was very clever here – during this slowed portion of the show, Perry got to take a break from dancing, and sang her ballads live. The earlier and later portions of the show were clearly some mix of prerecorded and sung-over vocals. And I say “clearly” not because it was blatantly obvious that vocals were prerecorded, but there were moments in which a flashy dance sequence would be going on during a chorus or the conclusion of a song, and Perry would be offstage, undergoing a costume change. Or she would be suspended from cables and was being swung over the audience. A production of this level can and must do both to keep the show moving. In this case it was impressive and seamless.

Regarding Perry’s vocals and the live versions of the songs: Everything was exceedingly well done. The live band, like Perry’s vocals, was arranged in and out of the show in such a rehearsed manner that it was hard to tell where the performance began and the show took over. Wireless guitars floated on- and offstage. A drum riser appeared and disappeared. At least the illusion of sometime performance was effective. 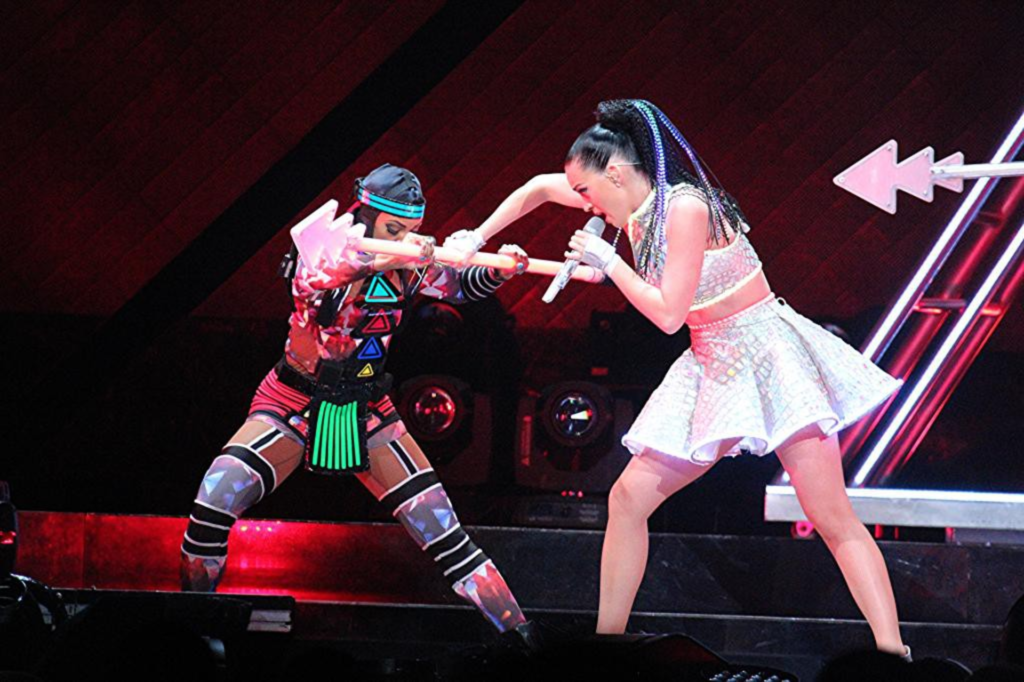 The energy was brought back up for the final portion of the show, heavy on dance hits including “Teenage Dream,” “California Girls” and “Birthday.” Perry and the dancers were outfitted in neon and 1990s motifs. A big inflatable convertible ushered Perry and her dancers downstage during her ode to California. Heart- and star-shaped confetti poured on the audience during “Birthday,” dedicated to a young audience member named Craig/Greg, who got to sit on a birthday throne onstage while Perry floated above the audience in a birthday-cake bodysuit.

Ultimately, whether the music is your bag or not, Perry proved herself to be infinitely likable as a performer. Even those who may generally shy away from radio pop – such as myself – would have had a hard time not falling a bit in love with Perry’s energy and presence. As I looked around at the widely varied audience, I counted myself among the newly anointed believers in Perry’s prowess and ability in this slightly insane, highly silly show. Perry is plain fun. Count me in next time.

Set list (approximate, please leave additions/corrections in the comments below):
Roar
Part of Me
Wide Awake
This Moment / Love Me
Dark Horse
E.T.
Legendary Lovers
I Kissed a Girl
Hot N Cold
International Smile
By the Grace of God
The One That Got Away / Thinking of You
Unconditionally
Megamix Dance Party
Walking on Air
It Takes Two
This Is How We Do / Last Friday Night (T.G.I.F.)
Teenage Dream
California Gurls
____
Birthday
____
Firework