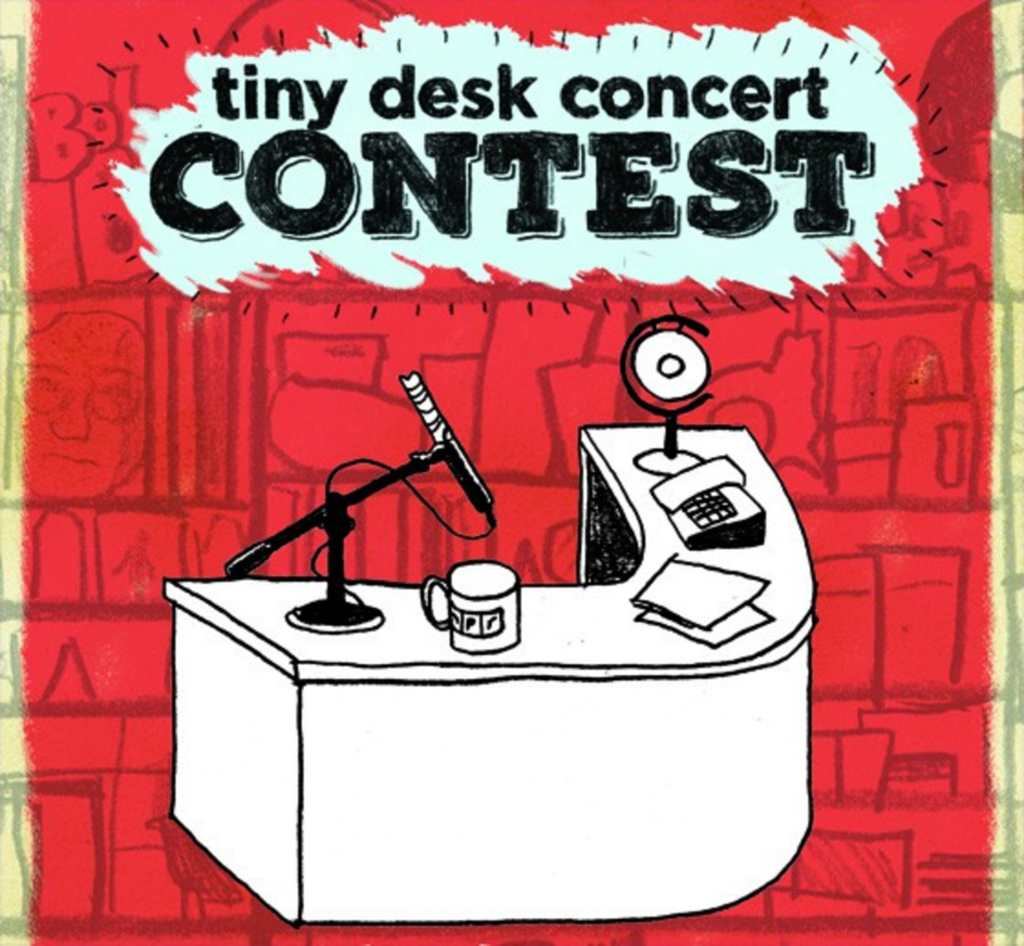 The Tiny Desk Concerts from NPR Music’s “All Songs Considered” filmed around host Bob Boilen’s desk are intimate, interesting and involving ways to see bands perform with constraints not often placed on them. It has resulted in some memorable moments: Neko Case performed in a gorilla suit for Halloween, and Gogol Bordello’s Eugene Hutz climbed on top of a desk and danced. Sometimes, though, you get breathtakingly intimate performances in which someone like Raphael Saadiq goes from New Jack Swing to pure blues.

NPR Music opened submissions to anyone who could make a video and received more than 5,000 entries between December 2 and January 19. The winning artist gets to travel to NPR’s Washington, D.C., headquarters to shoot a Tiny Desk Concert, and also gets to perform at SXSW “Couch Trippin'” showcase put on by Lagunitas Brewing. We’ve rounded up all the videos we could find of area performers in hopes of showing what an amazing array of musicians can do when they put their minds to it. (If we missed one, feel free to drop the link in the comments section.)

The Kansas City Bear Fighters might be the one act that didn’t really have to change anything for their Tiny Desk entry. Plenty artists had to strip down, change tone and otherwise flip things up, but other than not having their set interrupted by a dancing bear, these hot purveyors of skiffle have their sound pure and unfiltered.

Jenna Rae’s one-woman-band is haunting. She stomps and twangs her way through a song which could come from the depths of Americana, and her voice absolutely soars. Bonus points for actually picking the banjo, rather than strumming it, and the inclusion of a bottle of beer on her desk.

Til Willis, “Winter In America”

Willis performs a solo version of a song which was already pretty stark when backed by his band, Erratic Cowboy, on their new album, Cars Etcetera. Here, it’s positively bleak, working very much in the vein of Bruce Springsteen’s Nebraska.

Truckstop Honeymoon, “Home Is Not A Hotel”

Truckstop Honeymoon’s video submission is simple, charming and even a little funny. We’d expect nothing less from Lawrence’s Mike and Katie West, who make our hearts constrict with warm fuzzies whenever we see and hear them perform. This marks first of many videos with someone asking some variation of, “Is it rolling?”

Big props to the papel picado in this video. Such decorations make for a visually arresting piece, especially when you’re just one guy in Eudora, as Brandon Barnett is. HIs Invisible Public Library is less of a straight folk or bluegrass piece than one would expect, given the banjo. Think more like Andrew Jackson Jihad, and you’ve got an idea of what to expect.

Dolls on Fire, “Mr. Riot vs. the Ghosts That Haunt recordBar”

The weirdest part of watching Dolls On Fire’s submission is seeing them all sitting still. The band is known for having a ton of energy onstage, and seeing them stand in place for a solid four minutes is absolutely disconcerting. Still, when their synth-rock sound is turned into hot jazz for this video, it’s a testament to their versatility.

Claire and the Crowded Stage, “The Line From the Hook”

After a slew of acoustic and folky musicians, it was interesting to see a band with some swing in their sound. Claire and the Crowded Stage walks a fine line between funky and jammy, but they definitely caught our attention by sheer virtue of having a clarinet player and not being a jazz band. Big ups to having all seven people in the frame for the entire shoot, too.

The Blackbird Revue, “The Devil’s Hand”

Shot in one take at the Folk Store, the Blackbird Revue’s entry seems custom made for a Tiny Desk Concert: simple guitar, big vocals and captivating lyrics. A big plus is that it’s yet to be recorded for an album (although they have done it as a 909 Session for the Bridge), so it’s pretty much a live exclusive.

Yore is a new act, comprised of members from Gentleman Savage, Mother Culture and the Cherry Tree Parade. We’re excited to hear more from this group, as their video submission for “It’s Lost” manages to wrap up orchestral pop in a way that encompasses both Bright Eyes and Joanna Newsom.

In its video for “San Pedro,” Atlas does a nice job of playing some Calexico-styled desert country. This video made our Cine Local roundup last month, and we can’t get enough of the electric guitar-meets-Americana feel of this song.

The Snow Globes, “To All Living Things”

A self-described “Christmas band,” the Snow Globes certainly live up to their name and description. Big harmonies nicely counterbalanced by the bowed bass, while also complimented by the xylophone. It’s essentially Christian chamber pop, but it has a sense of melodic richness so often missing from praise music.

Katy Guillen and the Girls, “Woke Up in Spain”

There’s not much difference between the video for “Woke Up in Spain” and a standard Katy Guillen and the Girls set, except maybe Stephanie Williams playing the snare with her hands. Still, something about this version allows Guillen’s vocal interplay with Claire Adams to really shine through. That guitar tone is gorgeously shimmery, too.

Winners for the Tiny Desk Contest will be announced February 12, and you can follow some other highlights at the contest’s Tumblr page.