"... we have been shutting them down,” Cris Paden, Twilio’s director of corporate communications, said via email. 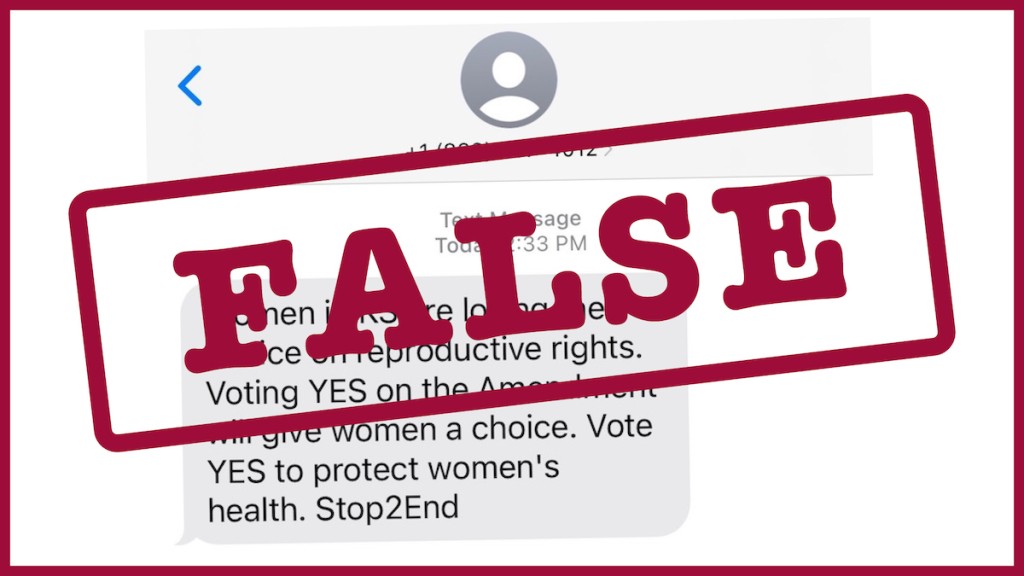 Voters statewide have been receiving a text message containing false information ahead of the Tuesday, Aug. 2, 2022 election. // Courtesy Lawrence Times

[This story originally appeared in The Lawrence Times, who perform vital reporting for LFK. Sign up for their daily newsletter to get more stories like this in your inbox.]

Voters across Kansas on Monday were receiving text messages containing inaccurate information about the constitutional amendment on Tuesday’s ballot.

It’s not clear where the text messages are coming from, but people statewide are receiving them. We heard from more than a dozen readers who had received the text as of Monday evening.

In reality, a “no” vote to the amendment will maintain the status quo of highly regulated, but legal, abortion in Kansas. The amendment on Tuesday’s ballots, if it passes (a “yes” vote), would give politicians the power to ban abortion.

The text message being sent out, which was false, reads: “Women in KS are losing their choice on reproductive rights. Voting YES on the Amendment will give women a choice. Vote YES to protect women’s health. Stop2End”

Responses to the text messages, including one reader’s query of what organization the sender is with, have been answered with an auto response: “Thank you for your response. We are getting a huge volume of messages. Our team will review them all and get back to you as soon as possible. Thank you!”

Early Tuesday, a spokesperson for Twilio, the company to which the text lines were registered, said that all known numbers associated with the text messages had been suspended.

“As we become aware of a number(s) being used associated with this account sending out this kind of disinformation, we have been shutting them down,” Cris Paden, Twilio’s director of corporate communications, said via email.

“I can confirm that this number has been suspended and they will no longer be able to send text messages.  Twilio’s Terms of Service and Acceptable Use Policy (AUP) make clear what we expect from our customers,” Paden said. “Based on this activity, we determined the account is in violation of our AUP, specifically prohibiting the spread of disinformation.

We had asked who or what organization was behind the messages.

“We have no further information to share, but hope this helps,” Paden’s email concluded.

Folks in the Statehouse have been hearing from constituents about the texts.

“This afternoon, my office phones lit up with non-stop calls from concerned Kansans after receiving targeted text messages from an anonymous sender,” House Democratic Leader Tom Sawyer said in a statement about the messages. “These texts intentionally spread disinformation saying that a YES vote on the anti-abortion constitutional amendment protects women’s right to an abortion. That is a lie.

“There is one word to describe this kind of politics: Dirty. Since day 1, the language of this amendment has sought to mislead and confuse voters. Among other efforts, House Democrats tried to clarify the language but all were blocked by the supermajority.”

The Federal Communications Commission requires the disclosure of who pays for political texts, according to Sawyer’s statement, and he says “the state should too.”

Voters who received the text may make a complaint to the FCC via this link.

Monday’s text is nothing new — much misinformation has swirled around the amendment over the past few months.

Though the amendment implies otherwise, abortion is already highly regulated in Kansas. The amendment on Tuesday’s ballots would give politicians the power to ban abortion in the state.

One bill is already written that would criminalize all abortions, regardless of whether the patient was a victim of rape or incest, or if the pregnancy could kill them. The only exceptions in that bill are for miscarriages, stillbirths and ectopic pregnancies. Any other abortions — including those for pregnancies that could kill the patient, and for patients who were victimized — would be punished at a felony level the same as murder. The bill, proposed during the most recent legislative session, died in committee because it was unconstitutional; however, if the amendment passes (a “yes” vote), proponents have recently reminded the public that the bill is written and ready to go.

A few other key points ahead of Tuesday’s vote:

• Abortion is already illegal after 22 weeks gestation (during the second trimester of a pregnancy) except in cases of life or death. Kansas is not a destination for late-term abortions, nor would abortion become legal up until birth if the amendment fails.

• State funding (taxpayer money) can only be used for abortions in cases in which the patient will die otherwise — even though the language on the ballot implies otherwise.

• Abortion based on the sex of the fetus is illegal.

• Many religions and religious people in Kansas do not share the belief that life begins at conception.

Read more about the statistics on who’s getting abortions in Kansas, and about the many restrictions that are already in place, at this link.

Cast your ballot in the Aug. 2 election

All registered Kansas voters may vote in the Aug. 2 primary. That includes unaffiliated and Libertarian voters. To see what’s on the ballot, visit this link. For information about voting in person, visit this link. Polls are open from 7 a.m. to 7 p.m. on Election Day, Tuesday, Aug. 2.