Kansas Senator Roger Marshall is a doctor, but his COVID-19 advice doesn’t always sound like it 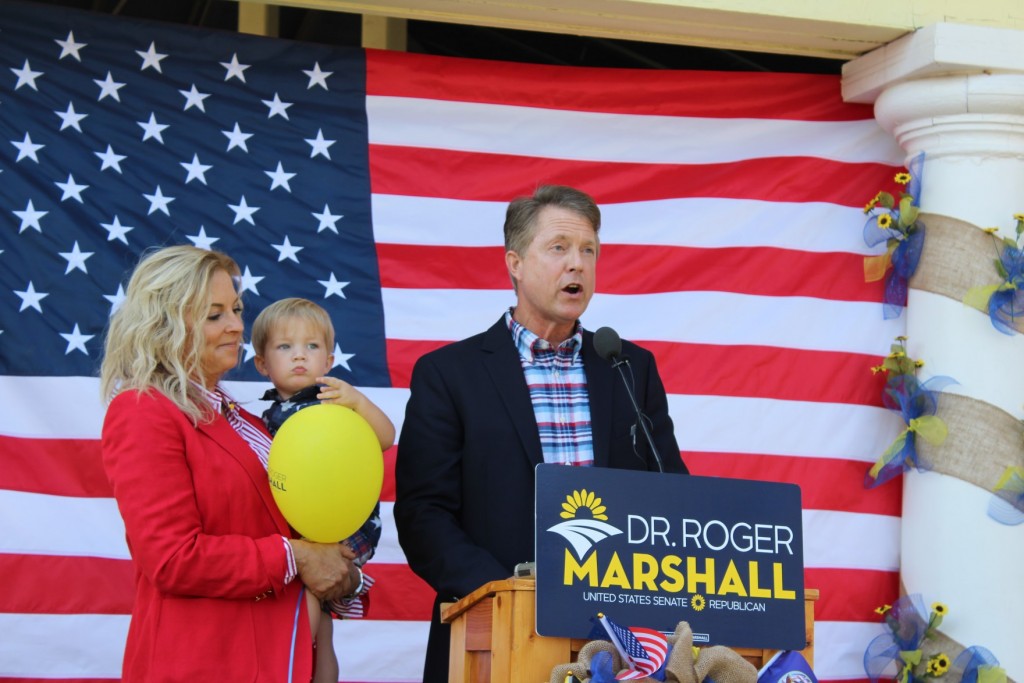 Kansas Sen. Roger Marshall on the campaign trail in 2019. He frequently touts his credentials as a medical doctor in cable news appearances and visits back to Kansas. // Photo Stephan Bisaha / Kansas News Service

Sen. Roger Marshall keeps telling Kansans to talk to their doctors about being vaccinated, but the advice he gives from his partisan platform as a doctor often doesn’t match with recommendations from other health experts.

For the past year, obstetrician and freshman U.S. Sen. Roger Marshall has given out one bit of advice after the next about COVID-19.

He recommended hydroxychloroquine during the emergency use period even though there was little evidence to suggest prescribing it for people sickened by the virus.

He appeared in his white coat alongside other members of Congress who also held medical degrees urging Americans to consider getting the vaccine.

He’s also opposed mask mandates. In fact, he routinely campaigned among crowds in his 2020 campaign without wearing a mask.

His advice runs from fully grounded in the medical mainstream to running against that same current.

Marshall is trying to delicately thread a needle: appealing to his conservative base that believes mask orders restrict their freedoms while also giving advice as a medical doctor. Meanwhile, roughly 48% of Kansans remain unvaccinated while the delta variant pushes hospitals to capacity across the state.

An August appearance on Newsmax gave a representative sense of the line Marshall walks.

“I do think the vaccines work. I’m not convinced the masks really work at all,” he said on the conservative network. “I just think that we’re kidding ourselves if kids wearing masks helps. It probably even makes it worse.”

Yet medical professionals and the Centers for Disease Control and Prevention recognize wearing a mask as one of the best ways to curb the spread of the coronavirus. Many school districts in Kansas and some county commissions have recently re-implemented indoor mask mandates at the request of local health officials.

Just 10 days after Marshall’s Newsmax appearance, Gov. Laura Kelly announced intensive care units at six of Kansas’s largest hospitals were at capacity, with two-thirds of the beds filled by COVID-19 patients. She responded sharply to a question about Marshall’s various public comments.

“That’s a problem when you have high-profile public figures spreading misinformation,” Kelly said. “And the facts are: Vaccinations are safe and masks work.”

Often in the same video or broadcast, he’ll encourage people to speak with their local doctor or pharmacist about getting vaccinated and then say they should receive an antibody test first. Or sometimes Marshall has said he opposes mask and vaccine mandates before making dubious claims about so-called natural immunity, the idea that bodies can adequately defend themselves against the virus without a vaccine after an infection.

“Natural immunity is at least as good as having had both vaccinations before,” on a July episode of the Guy Benson Show on the Fox News Channel, Marshall said.

Scientists believe that immunity wanes over time. For someone who’s been infected with COVID-19 over the last year and a half, it could potentially last for eight months or fade as quickly as five to seven months.

Marshall says he has been vaccinated and so have his parents, who are in their eighties. But he said his son has not.

“I’ve got a 21-year-old son that’s had the virus,” he said. “He has the antibodies. And no one has convinced me that there’s any benefit to adding a vaccine on top of it.”

While scientists are still researching how long antibodies from a previous COVID-19 infection last, the CDC’s official recommendation is that most people who’ve had COVID should get vaccinated.

Marshall has come under fire for what critics see as mixed messages: All adults don’t necessarily need to get vaccinated; masks might not help stem the spread of the virus.

“In those kinds of exchanges, ambiguity doesn’t work well for audiences,” said Kathleen Hall Jamieson, the director of the Annenberg Public Policy Center at the University of Pennsylvania. “Audiences will hear what they want to hear under those circumstances.”

This is where what Marshall is actually doing becomes important to constituents watching his behavior.

“If you’ve got a representative who’s in spaces with others, in which you’ve got high rates of transmission, and that person isn’t masking,” Jamieson said, “that person is putting themselves and others in danger.”

But she credits him for regularly noting in public that he’s been vaccinated.

“His modeling of that behavior is, in fact, a form of communication,” Jamieson said.

It could be Marshall’s most devoted partisan constituents who need the clearest convincing to be vaccinated. A survey by the Kaiser Family Foundation found that 58% of Republican or Republican-leaning adults would “definitely not get the vaccine” and only 34% of Republicans ages 18 to 49 said they were vaccinated.

Sen. Jerry Moran, the other Kansan in the U.S. Senate, has been more explicit — if less vocal.

“The vaccine is safe, effective and free,” he tweeted. “I continue to urge Kansans to get vaccinated. Protect yourself, your family and your community from COVID-19.”

Early in the pandemic, Moran led an effort to bring 100,000 surgical masks from Taiwan to aid in Kansas’ emergency efforts, and prior to vaccines being available he encouraged Kansans to wear masks around big holidays. Lately, he hasn’t said much. But he hasn’t expressly advocated against masks like Marshall.

Marshall’s office said he stands by his comments about masks, but did not respond to questions about if he believes masks work to prevent COVID-19, if he wears masks in high transmission areas, or if he believes exposed immunity is just as effective as vaccinations.

At her press conference from a Kansas City area hospital, Kelly argued more decisively for the things Democrats have seen as the right response to the pandemic.

Abigail Censky is the political reporter for the Kansas News Service. You can follow her on Twitter @AbigailCensky or email her at abigailcensky (at) kcur (dot) org.