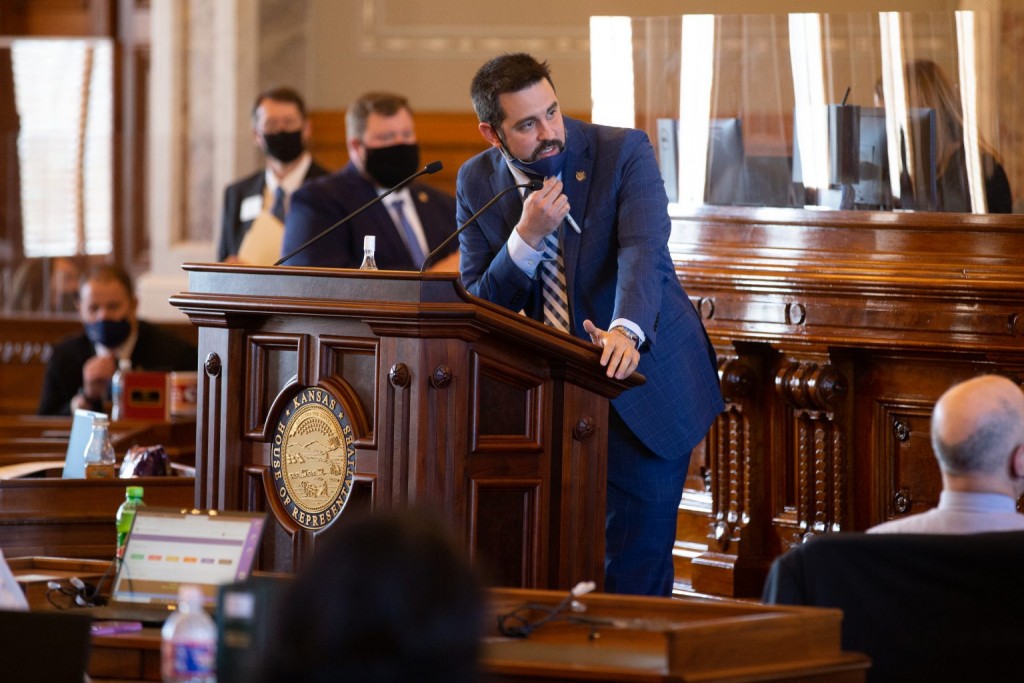 Kansas Rep. Mark Samsel appeared on the House floor as lawmakers gathered for the first time in several weeks, then dodged reporters.

“He’s a foster kid,” Samsel says in a video published to YouTube Thursday, “His alternatives in life were having no parents or foster care parents who are gay. How do you think I’m going to feel if he commits suicide?”

Samsel was released on a $1,000 bond after being arrested Thursday. His actions and arrest were not mentioned during a meeting of GOP lawmakers before a series of high-stakes veto override votes. The GOP-controlled Kansas Legislature wants to undo eight bills and 18 lines of the state budget proposal vetoed by Democratic Gov. Laura Kelly. KSNT says this is the most a governor has vetoed the legislature in 17 years.

“Something was off,” Sutton says. “That wasn’t normal behavior at all.”

An “apology” was released by Samsel in a Facebook post on Sunday with no mentions of resignation. Top GOP lawmakers including House Speaker Ron Ryckman and House Majority Leader Dan Hawkins have not taken a position on whether Samsel should resign.

Samsel wrote that he did not do anything wrong and indicated the events were staged. He says he was “truly sorry that this has caused pain and confusion”. Commenters on the Facebook post described his words as “incoherent” with some urging Samsel to “get help”.

“I can’t do anything about the haters,” Samsel wrote according to Newsweek. “Nope, that’s beyond me. But I do listen to T-Swift. I shake it off. Always Will. God has me exactly where He NEEDS me. And that scares folks and confuses ’em.”

“I know several kids who care about me deeply and because of the nasty and false/misleading things written by the KC Star and others here on social media, THEY are hurting. That’s not caused by me folks. Nope, that’s you, keyboard warriors… The truth will continue to unfold over the coming days.”

KSNT interviewed Samsel after the arrest and the footage is on KSNT’s YouTube channel. He appears to be standing in front of Ann’s Diner in Lyndon, KS. An unidentified woman is seen next to him wearing an Ann’s Diner T-shirt and headband who he hugs in the video.

“Altercation’s a strong word,” Samsel says. “There was no altercation. I’m sure there’s some, one, or two students that probably perceived it as one but, um, it was exactly as we planned it.”

The Star says Samsel previously argued his actions in the videos were planned and some of the students were aware of what was going to happen.

“I think about resigning every single day. That place sucks. Topeka sucks,” Samsel says to KSNT.

Although he interviewed with KSNT about the situation, he stayed in a back room and did not take questions from reporters during a recess on Monday at the Capitol.

Wellsville school board members also declined to comment on Monday. Samsel is not allowed to work for the district as previously said by the superintendent. He is a referee for the Kansas State High School Activities Association which governs high school sports in Kansas but the organization’s director said in an email Samsel has no contracted games.

Franklin County Attorney Bryan Jones says Samsel is scheduled to make his first appearance in district court at 8:30 a.m. on May 19.