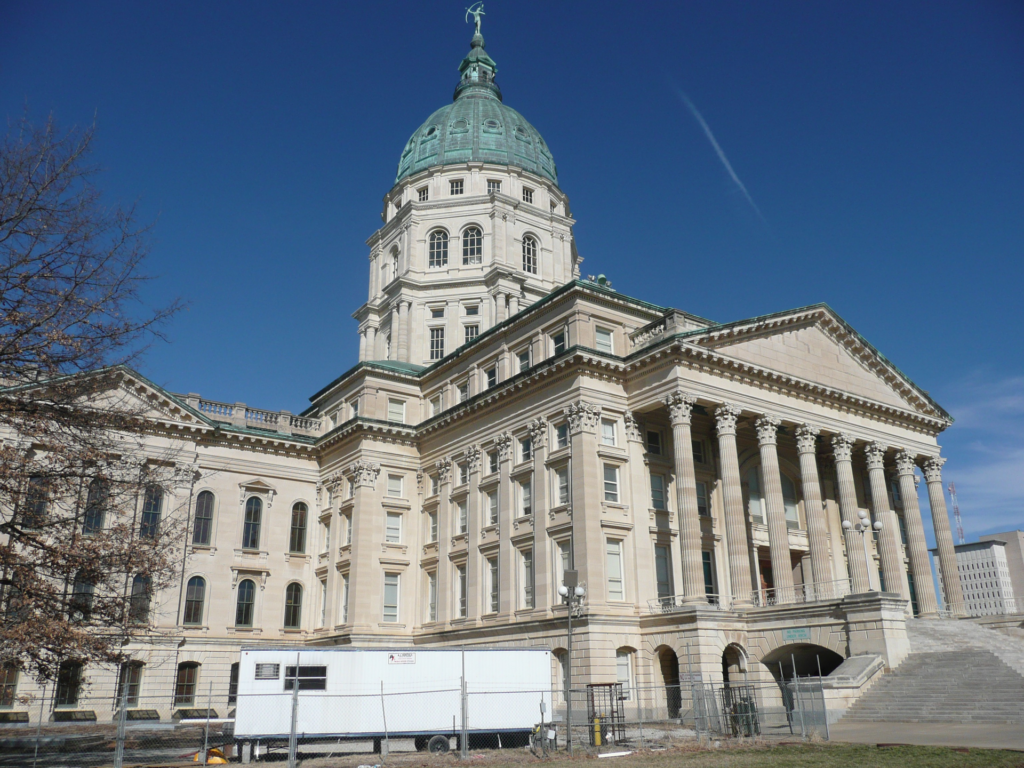 Update: After press deadline, House Bill 2332 and House Bill 2183 were amended and passed the legislature. Among other things, the bills would restrict and penalize returning absentee ballots for voters in certain cases, as well as block county elections offices from receiving non-public funds to support their work, and ban the judiciary or the Governor’s office from changing state elections laws. The bills now await the Governor’s decision.

Think your vote doesn’t matter? Ask the Republican super-majority in the Kansas state legislature—or better yet, look at what they’re doing.

Just like Georgia’s now-infamous new voter suppression laws, new Kansas bills (Missouri has many too, though that’s a separate story) are part of a national movement to criminalize common elections practices and deepen existing hurdles to vote.

Proponents of these measures—including Kris Kobach’s “top deputy,” former Deputy Assistant Secretary of State Eric Rucker—claim this will help stop voter fraud. Opponents describe the bills as a “problem in search of a solution.”

Kansas bills S Sub HB 2183, SB 307, and S Sub HB 2332 would, among other things, make it a felony to help more than five of your friends or neighbors drop off their mail-in ballots, and make it harder to assist people with disabilities to vote.

If you’ve ever felt the stress of receiving a bill in the mail that’s due in a few days, welcome to your new Kansas vote-by-mail laws. Under these proposed changes, voters will receive mail-in ballots later, and all ballots must be received by county elections offices by 7 p.m. on election day, no matter when they are dropped in a mailbox, or they get tossed out.

“That provision could create a scenario where someone mails in an advance ballot three days before election day, and because the mail might be moving slower than normal, the ballot arrives late and isn’t counted,” said 102nd District House Representative Jason Probst.

“These bills have one goal: to make it harder for disabled voters, elderly voters, military voters serving abroad, voters who live in rural areas, and voters of color to exercise their right to vote,” said Kansas Senator Ethan Corson in a legislative update.

Secretary of State Scott Schwab’s team, said there were no issues in the 2020 election.

“The 2020 election went very well in Kansas and we did not experience any widespread, systematic issues,” says spokesperson Katie Koupal.

But he’s not intervening: “It is the policy of this office that we be neutral on legislation not introduced by our office,” Koupal clarified.

Johnson County’s former Election Commissioner publicly opposes the bills, and the Kansas County Clerks and Elections Officials Association has come out publicly against portions of them.

“On the one hand you have a Republican Secretary of State saying there was no fraud—and yet, you see policymaking in the exact opposite direction,” says Kendall Seal, Policy Director for the Kansas ACLU. “These are coordinated attacks on the right to vote. You’re seeing it in Georgia, you’re seeing it in Kansas.”

So what’s the impact? Roughly 30,000 Kansas votes would have been disenfranchised in 2020 had these bills been in place, according to testimony from Secretary Schwab.

“In my race, I was up by three votes on election night. Late arriving ballots pushed me up to a bigger lead, and when all the late ballots and provisional ballots were counted, I won by 31 votes,” said Rep. Probst.

If these bills had been on the books in 2020, “it is impossible to project how many elections would have been altered,” says Patrick Miller, Associate Professor of Political Science at the University of Kansas. “Some races were very close, and it’s possible that even a handful of small changes could have affected close races.”

All of these bills are in the last stages of amendments and review before a final vote, and modifications are still coming in. Bill opponents are pushing Kansans to speak out to their lawmakers before it’s too late. Find Kansas representatives here.

Voting rights groups signaled that passage is likely. The Kansas ACLU is warning lawmakers of the consequences of passing unconstitutional laws.