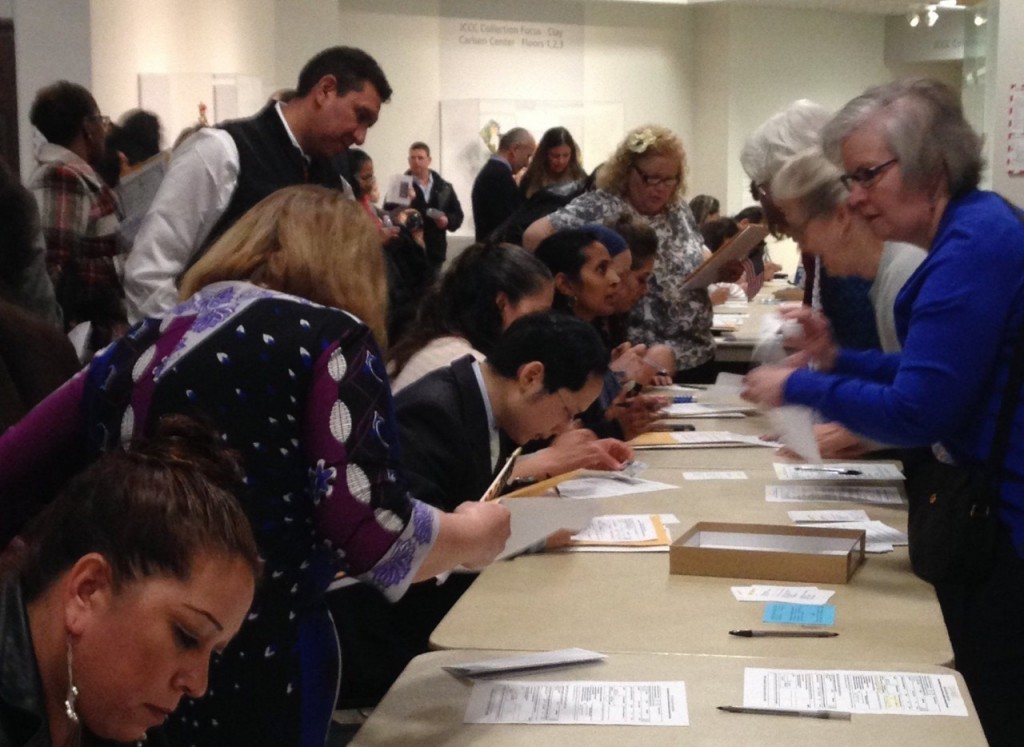 Members of the Johnson County chapter of the League of Women Voters help register new voters at a naturalization ceremony in 2019. The nine Kansas leagues are abandoning plans to attend naturalization ceremonies this summer, as well as all other voter registration and education efforts, for fear of criminal prosecution under a new law. // Photo courtesy of Kansas Reflector

The League of Women Voters of Kansas and other nonprofits are suspending voter registration drives for fear of criminal prosecution under a new state law.

The groups filed a lawsuit over new election-related restrictions enacted by the Legislature this session, and a judge has yet to act on a request for a temporary injunction to block enforcement of the laws until the case is resolved. One of the provisions makes it a crime to engage in activity that “gives the appearance of being an election official.”

Without clarity from the court, the organizations argue in court filings, there is a “serious risk” that someone will mistake people who are knowledgeable about voter registration as election officials.

Jacqueline Lightcap, co-president of the League of Women Voters of Kansas, says she has asked the organization’s nine local leaders to temporarily suspend their voter education and registration efforts.

“It’s very disheartening,” Lightcap said. “We’re not happy about it. We’re not pleased. We don’t want to do it. But at the same time, it needs to be known that this is not a good law.”

Support for President Donald Trump’s lies about voter fraud in the 2020 election seemed to motivate the GOP-controlled Legislature to rewrite the state’s election laws — despite assurances from Republican Secretary of State Scott Schwab that Kansas elections were secure.

House Bill 2183 adds new restrictions and penalties for touching somebody else’s ballot, distributing ballots, helping someone turn in their ballot, or altering the postmark on an advanced ballot.

Under the law, false representation of an election official is a felony crime with a punishment of up to 17 months in prison and a $100,000 fine.

Democratic Gov. Laura Kelly vetoed HB 2183 and House Bill 2332, which includes new restrictions on the distribution of applications for a mail-in ballot. The Legislature’s two-thirds Republican majority overrode her vetoes, clearing the way for the laws to take effect on July 1.

The League of Women Voters Kansas, Loud Light, Kansas Appleseed Center for Law and Justice, and the Topeka Independent Living Resource Center filed a lawsuit June 1 in Shawnee County District Court challenging the constitutionality of the two bills. The groups on June 17 asked Judge Teresa Watson to issue a temporary injunction before the laws went into effect, but the judge has yet to rule on the request.

“This new voter suppression law irreparably harms Kansans every day it remains in effect,” Hammet said. “Kansans miss the opportunity to be engaged, our team misses its right to exercise free speech, and our democracy is undermined. Rather than celebrate this important milestone out in our communities, we will be forced to the sidelines.”

Hammet said his organization will have to suspend activities at music and food festivals and other events where it typically would register hundreds of new voters during the summer months. If the issue isn’t resolved soon, he said, it will impact the organization’s campus campaigns when students arrive at universities for the fall semester.

“Young people are the highest unregistered population, and therefore any barrier to registration disproportionately impacts them,” Hammet said.

Pedro Irigonegaray and other attorneys argued on behalf of the groups in court filings. They said there is significant overlap between the work of advocates and election officials who both actively encourage Kansans to vote and help them understand the voting process.

Plaintiffs can’t be sure they will never be perceived as election officials, they argue, and past experiences indicate this mistaken identity will happen no matter what they do to make it clear they are not election officials.

Kansas law already made it illegal to represent oneself as a public official. The new law appears to be more vague about what would constitute a crime.

“We are legitimately concerned that our staff and volunteers might face criminal charges if someone at the farmers market subjectively thinks they might be impersonating an election official and reports them,” said Caleb Smith, a voter engagement campaign director for Kansas Appleseed. “The vagueness of the law allows for the possibility it could be weaponized by those seeking to suppress the vote in Kansas.”

Katie Koupal, spokeswoman for the secretary of state, declined to comment on whether the organizations are accurately interpreting the law. She said county and district attorneys would typically decide whether to prosecute cases, and that the attorney general’s office also could investigate and pursue cases of criminal misconduct.

This piece is reprinted with permission via the Kansas Reflector, which focuses on Kansas political and policy reporting.