The governor’s office in Kansas’ ornate statehouse is one of the loneliest places in America right now.

Republican Sam Brownback’s approval rating in perhaps the nation’s reddest state is down to 21 percent, according to Fort Hays State University. The Legislature is in rebellion. Even conservative lawmakers are scrambling to put distance between themselves and the governor. Elections are coming up, and in some places, to be accused of supporting “the Brownback agenda” this year might be more damning than being tagged as a closet supporter of President Barack Obama.

Already worn down from years of spending cuts and shameless budget gimmicks, lawmakers found out last week that they’d have to deal with a new shortage of almost $300 million over the next 15 months. As Duane Goossen, the state’s budget director in better times, has written on his blog, that means plugging a hole “not so that Kansas can flourish, but so that Kansas can just barely scrape by with no money in the bank.”

For some perspective on how everything became so terrible in such a short span, it’s instructive to revisit some of Brownback’s more memorable pronouncements about the steep income-tax cuts that have left Kansas gasping for revenue even as citizens deal with one of the highest sales-tax rates in the nation. Call them Brownbackisms, call them broken promises — they offer a window onto the hubris that has placed Kansas’ roads, schools, universities and children’s programs at risk, while trashing the state’s image nationwide. 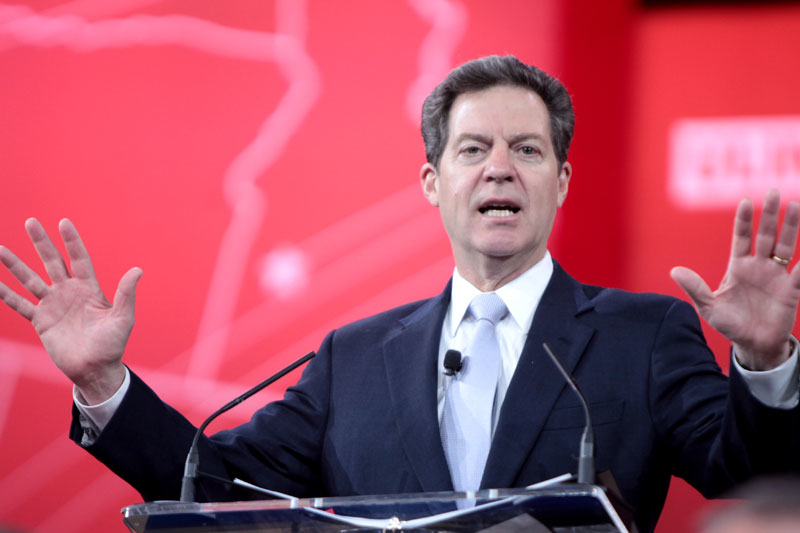 “Our new pro-growth tax policy will be like a shot of adrenaline into the heart of the Kansas economy.”

Brownback made this assertion in an op-ed that he pitched to newspapers around the state in 2012, soon after he signed a law that lowered individual income tax rates and exempted certain types of businesses from paying any state income taxes at all. “It will pave the way to the creation of tens of thousands of new jobs, bring tens of thousands of people to Kansas, and help make our state the best place in America to start and grow a small business,” he went on.

Later, as job growth in Kansas continued to lag behind the nation and the region, Brownback allowed that the “shot of adrenaline” remark was “inartful.” The tax cuts would work, he said, but it was going to take awhile.

“We’ll see how it works. We’ll have a real live experiment.”
This remark dates to Brownback’s appearance on MSNBC’s Morning Joe program, also soon after he signed the 2012 tax-cut bill. People wondered at the time: What kind of governor turns a state into a laboratory? A governor detached from reality, as it turned out. Brownback later conceded that the “real live experiment” phrasing was also inartful, but he stood by the experiment itself.

“Look out, Texas. Here comes Kansas!”
Brownback delivered this blustery warning in his 2013 State of the State speech, when he announced that he wanted to take state income tax rates to zero, just as Texas had done. “This glide path to zero will not cut funding for schools, higher education or essential safety-net programs,” he said, in what turned out to be a whopping lie.

But Brownback’s remark about catching up with Texas did contain a kernel of truth. No, Kansas has not become a job-creating engine the way Texas was before the oil bust. But the Lone Star State in recent years has scored near the bottom in national rankings for education funding, health outcomes and safety-net spending. Look out, Texas. Here comes Kansas.

“I’m the sort of guy who would have sent Alex Gordon from third base.”
This Brownback boast, in his 2015 State of the State speech — weeks after he’d won a tough re-election bid against Democrat Paul Davis — was an attempt to co-opt regional love for the Royals. Of course, plenty of die-hard Royals fans knew very well that Gordon would have been out had he gone, making Brownback’s rhetoric here nothing but a bad bunt. The governor’s version of a potentially game-winning dash to the plate? Another pledge to keep strolling the path to zero income tax. “There may be some who consider this course too bold,” he said. But by then, nobody was mistaking Brownback’s obsession for boldness.

“The sun is shining in Kansas, and don’t let anybody tell you any different.”
Perhaps the most infamous Brownbackism, this one comes from a commercial produced for the governor’s 2014 re-election campaign. It featured a confident-looking Brownback talking about how well everything was going, while a group of listeners earnestly bobbed their heads.

One week after Brownback eked out a victory, forecasters disclosed that the state’s finances had collapsed. Kansas was on track to spend $1 billion more in its budget cycle than it could expect to receive in revenues.

The sun has not risen in Kansas since. Every six months, a new revenue forecast has brought with it a new catastrophe.

The Topeka Brownbackism machine has been quiet for a while now. The best the governor could come up with when the latest bad news broke was a wooden statement informing his citizens: “I do not believe it would be useful to have a debate about raising taxes on small businesses or anyone else.” He then trotted out his budget director, Shawn Sullivan, to brief lawmakers and reporters on the administration’s plan for closing the new gap. It includes more robbery from the highway fund and other horrible options that would further chip away at education and other crucial state services.

The administration has once again offered nothing close to a long-term solution for the budget crisis. In fact, Sullivan last week tried to peddle the hokum that Kansas would be worse if the tax cuts, including the exemption for businesses, were not in place.

Lawmakers are likely to hear evidence to the contrary when a bill to revise the business exemption gets a hearing on April 28.
Meanwhile, in Topeka, resentment builds.

“Gov. Brownback is asking us to take our finger out of the dike and stick our heads in,” Rep. Mark Hutton, a Republican from Wichita, told the Wichita Eagle after learning of the new budget proposals.

With the experiment in tatters, the shot of adrenaline acting like a sedative, and the sun stuck in a cold eclipse over Kansas, a new Brownbackism is in order. Something with a ring of humility to it, maybe. Don’t hold your breath.