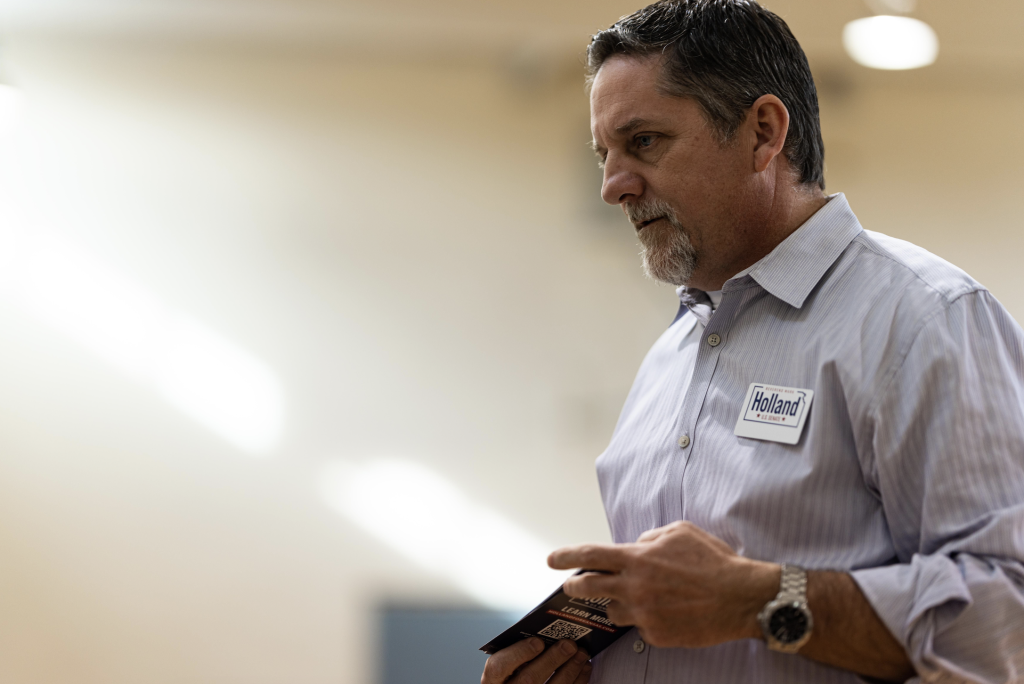 For decades, there have been few political certainties as rock solid as what exists in Kansas. In presidential elections since 1980, Republicans have won by over 20 points in every election not featuring Ross Perot.

The Republican party has controlled the state senate since 1917, including a continuous supermajority since 1996. This has enabled their control of both state chambers since 1992—which, for context, is the year Quentin Tarantino debuted with Reservoir Dogs and Marisa Tomei won an Academy Award for My Cousin Vinny.

Despite this history, the conservative stronghold showed deep fractures earlier this year when the GOP-pushed amendment to explicitly exclude abortion rights from the state’s constitution was voted down Aug. 2. Opponents of this amendment are quick to point out that it wasn’t simply defeated; it was trounced, with “no” winning by a resounding 18 points, leading to questions about the state of politics in the Free State.

Standing at the intersection of these political crossroads is Mark Holland, who became the Democratic nominee for Kansas’ Senate race after garnering nearly double the votes of his nearest opponent, ultimately winning the bid by—ironically enough—18 points.

After a career as a Methodist pastor, Holland made his foray into public office when he was elected as a commissioner in the Unified Government of Wyandotte County/Kansas City, Kansas. He then served as mayor of KCK from 2013 to 2018.

I had the chance recently to sit down with Holland for a one-on-one interview at the KCK Public Library. My curiosities for the interview had little to do with political platforms or campaign promises; rather, I wanted to learn more about what spurred Holland to throw his hat—and his life—into the political whirlwind, given the immensely bleak odds and how he felt as those political truths became, quite suddenly, less certain.

Bats out of Hell

Mark Holland introduces himself on his website and in person as a “fourth-generation Kansan.” It became apparent this wasn’t simply lineage but a meaningful identity that he felt connotes fortitude and moral resolution.

“Kansas is a courageous state. We have a history. You know, we came [into the United States] as a free state,” says Holland. “We had to fight to defend that. You know, if [Kansans] were just weathervanes, we’d have gone along with becoming a slave state, but we fought back and came into this union as a free state.”

He sees this bravery as permeating the state, adding, “It takes courage for a farmer to borrow hundreds of thousands of dollars to put in the ground with a prayer that is going to come back out. You know, we need people who have the same level of courage as Kansans to represent Kansas.”

He recounts examples of Kansas being the breeding ground for change in this country, alluding to the William Allen White quote:

“When anything is going to happen in this country, it happens first in Kansas. Abolition, Prohibition, Populism, the Bull Moose, the exit of the roller towel, the appearance of the bank guarantee, the blue sky law, the adjudication of industrial dispute as distinguished from the arbitration of industrial differences—these things come popping out of Kansas like bats out of hell.”

Holland sees the latest addition to this legacy in Kansas. “This vote on August 2 is another bat out of hell that we’re going to see play out nationwide with a [Roe v Wade] wave. That’s coming. That’s going to reset what’s happening in our country right now and it started in Kansas.”

Holland holds the same belief in his campaign that he held for defeating the anti-abortion amendment. He recounts “Yes” votes winning by five points in late polling, yet he remained unshaken because of what he witnessed on the campaign trail. 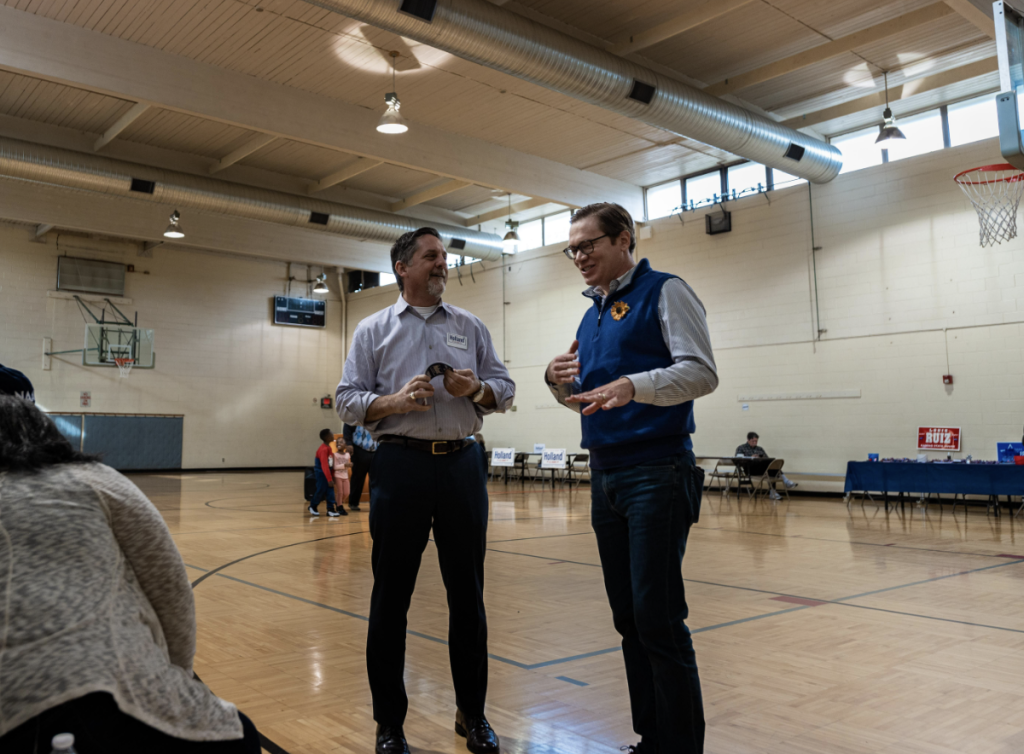 Holland mentioned his opponent Jerry Moran’s name often during our discussion, just as he does in the selfie videos on his website. While this tendency may stem—even in part—from political awareness, it echoes the fearlessness that I found so interesting in Holland’s campaign.

Not only is Holland unafraid to invoke Moran explicitly and directly to criticize him—hell, skewer him—but his repeated criticisms of the incumbent seem to center on Moran’s lack of similar gumption.

“He’s so cautious and so careful and so unwilling to take a stand on anything, for him to go all in on ‘Vote Yes,’ he was sure it was a slam dunk,” Holland says.

While Holland takes aim at Moran often in our conversation, this critique seemed unique in its layering. First, he accuses Moran of being politically demure; this seems to be a cardinal sin in Holland’s definition of what a Kansan should be.

Second, he accuses Moran of a sort of calculated morality, implying the Senator only breaks from shyness to peacock for causes that he forecasts as being advantageous.

Finally, Holland suggests that Moran’s whiff on this issue implies a deeper issue still: Moran uncharacteristically putting so many chips on “Vote Yes” signifies a failure to understand the wishes of those he represents in Holland’s eyes.

While Holland had already proven himself ready to not mince words in discussing his perceived flaws in Moran’s representation, the interplay of flavors here felt like the barrel-aged stout of political critique.

To drive home the point, he adds, “I’m all in [on] because it’s the right thing to do [and] it’s not just because it’s politically popular. I’ve been pro-choice my entire career. So that’s where I stand. And then to see Jerry Moran go [all in on ‘Vote Yes’], he guessed wrong. He misread what was happening in Kansas.”

While his criticism of Moran was biting, it never felt truly venomous. The attacks never felt personal. By contrast, Holland’s statements about how he viewed Kansas values and how he felt they should be reflected in Washington did.

“We need to lean into these things. We need leadership and courage. We can’t have someone who’s simply a weather vane following the political winds.”

The path to victory

The fervor allowing Mark Holland to not blink in taking on Jerry Moran and Kansas’ GOP machine was used to defy calls to stand down, even when they came from inside the house.

With his usual candor, Holland shares that even several Democrats he spoke to told him not to run, telling him, “It’s a waste of time,” and, “Don’t bother.” Holland says he got the sense the party would rather play defense in this midterm, but clearly he has—again, boldly—rebuked that call.

“Look, I’m tired of gathering the crumbs beneath the Republican table in Kansas. I’m tired of being happy with one seat at the table. We need to lead this state.”

One would be mistaken to think his zeal is purely sentimental, though; Holland backs his assertions with a rationale that suggests they come from his head as well as his heart.

“We [have] a path because, according to the Docking Institute at Fort Hays State University, Laura Kelly has a 54% approval rating as governor. Jerry Moran has a 32% approval rating, the lowest among any elected official in Kansas right now statewide, including Roger Marshall.”

He says to capitalize on what he sees as favorable circumstances; he wants to emulate recent Democratic successes by electrifying all of Kansas, meaning rural areas in addition to population centers.

Holland says he dismissed polls predicting a “Vote Yes” win in August, in part due to the passion he witnessed on the campaign trail. He says he feels the same about November’s midterm.

“Coming into September and October, my experience again back on the campaign trail, people are sitting forward, people are interested, people are engaged at a level that I’ve not seen before.”

In recounting his dismissal of polls predicting a “Yes” win in August—and his subsequent affirmation as the results rolled in as a decisive rebuke—Holland infers an accuracy issue with conventional polling, particularly citing Trump supporters and people under 30 as hard to gauge.

Instead, he presents a more stripped-down model.

“My math is simple for my race. If the ‘Vote No’ group comes back, we win. If they stay home, we lose,” says Holland. “But my belief is this group has seen, particularly in Kansas, for the first time, that their vote matters and they can make a difference. And once you get a taste of your vote mattering and a movement moving the needle in what’s happening… I think people want to be a part of it.”

Though bolstered by the surprise results on Aug. 2, Holland seems to understand—and embrace—the audacity he represents.

“Everyone going to say we’re crazy until we do it,” he says.

Facing Goliath (But Not the One You Think)

In continuing to dauntlessly stare down the behemoth Kansas Republicans and push unfazed regardless of conventional wisdom, Holland takes another swipe at incumbent Jerry Moran, using his signature resolve to defang the Senator like a Boggart in Harry Potter.

“Jerry Moran is not a leader in the US Senate. Nobody has ever heard of him. […] It’s not like I’m taking on Mitch McConnell, right, or Lindsey Graham or someone of that stature. Jerry Moran has no stature nationally, and honestly, he’s invisible in this state as well.”

When I asked if he felt like he was facing Goliath in this race, he replied that he wasn’t; rather, he says he’s “facing a weathervane.”

Though he rebuffs the Republican Party and Jerry Moran frequently in his comments, Holland comfortably wears his boldness and presents himself as a moderate candidate. All in a typical unapologetic fashion.

As he shares that it’s been nearly 100 years since Kansas sent a Democrat to the Senate, Holland adds, “But it’s not been that long ago since we elected moderates. And the only moderates left are in the Democratic Party. The Republican Party has purged all moderates out of the statehouse in Kansas and all the moderates out of their federal delegation.”

He continues, “We need bold leadership of folks who care about the community and about our country, care about Kansans and not just care about their own reelection. […] There are times for courage, and there are times to stand up and take a stand. And we are in those times right now.”

Holland cites his decades as a pastor in his approach to politics, where he says he led individuals from across the spectrum towards a common goal. He says this played out often in KCK when he served in office.

“There’s no Democrat or Republican way to pave a street. We’re elected to solve problems,” he says.

Even with his ceaseless belief, Holland knows he has a giant to face, even if he doesn’t believe it’s his actual opponent.

Mark Holland doesn’t just feel comfortable standing defiantly against the odds; he exudes sincere belief that on November 8 his state will back him in taking down the status quo once again.

“You can buy a campaign, but you can’t buy a moment. And I don’t have the money Jerry Moran has, but I have a moment unlike any other in this country, and that’s why we win,” he concludes.