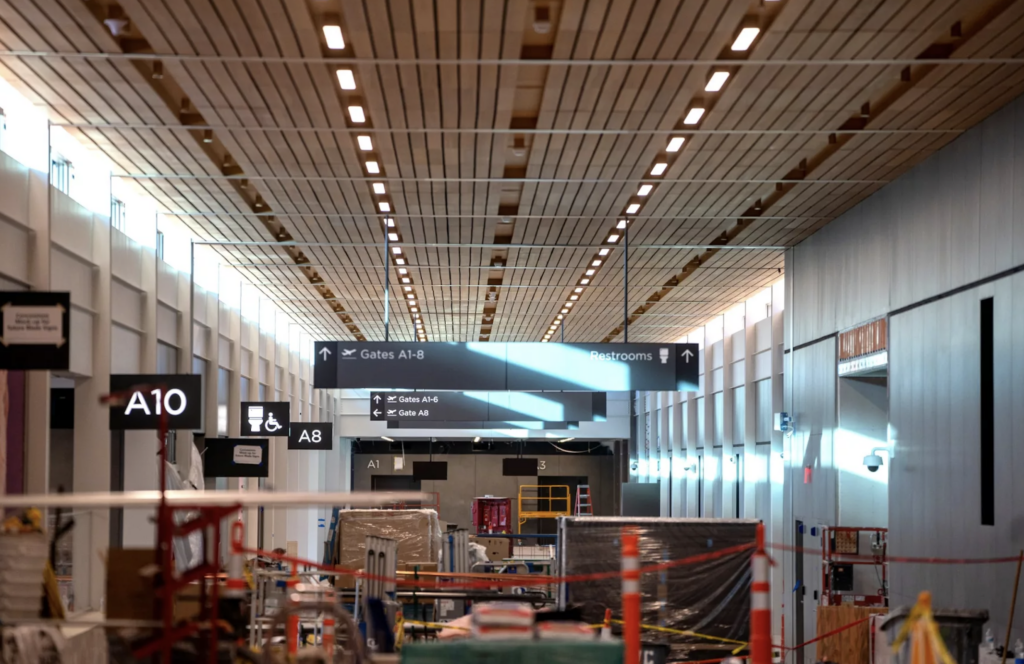 Concourse A at the new terminal of Kansas City International Airport, which is scheduled for completion in spring 2023. // Photo by Christopher Smith of Kansas City Beacon

This story was originally published on the Kansas City Beacon.

Construction of a gleaming new $1.5 billion terminal at Kansas City International Airport is nearly down to finishing touches.

Kansas City residents voted by an overwhelming margin in 2017 to go ahead with the largest infrastructure project in the city’s history, trusting in promises that the new terminal would create a much-improved passenger experience and be good for the region’s economy. Supporters said it would likely result in more flights in and out of Kansas City, including international flights.

At the time of the vote, it was apparent that the airport’s horseshoe-shaped terminals, built in 1972, were obsolete. They lack adequate space or modern security checkpoints, have limited restroom capacity and offer few food and beverage concessions.

“Southwest, our largest carrier, said publicly in 2016 that they throttled back building connections over KC because it’s such a poor connecting experience for passengers,” said Justin Meyer, deputy director of the Kansas City Aviation Department.

“As we eliminate those hurdles our hope is that we would see Southwest and others begin to grow because the facility becomes more flexible for them.”

In fact, Southwest Airlines announced this fall it would add more flights to several existing routes serving KCI in the spring, once the new terminal goes online.

The Beacon recently took part in a tour of the still-developing terminal, which Meyer led.

Inside the skeleton of the roughly 1 million square-foot terminal, more than half of the artwork — created by multiple artists after an intensive selection process — has been installed. Two moving walkways will expedite transfers between two concourses. There are a total of 39 gates.

Accessibility is a key theme in the design of the terminal. Each concourse has a restroom core that includes a water bottle station, a family restroom with an adult-sized changing table, a multiuser restroom, gendered restrooms and service animal relief areas.

The terminal will also include 10 rooms for nursing mothers and infants, a quiet room, two Delta Sky Club lounges and an aircraft cabin simulator made with the front of a scrapped Airbus A321 plane to accommodate autistic passengers who may experience negative reactions to airplane travel.

Meyer said the new terminal would expand KCI’s passenger capacity from about 30,000 passengers a day to more than 50,000.

“We can be twice as busy as we are now and not need to grow,” he said.

With assistance from Joe McBride, marketing and communications manager at the Kansas City Aviation Department, and observations from the tour, The Beacon is sharing answers to some of the most frequently asked questions about the new KCI terminal.

What is the official opening date for the new airport terminal?

While the contract completion date with the developer, Edgemoor Infrastructure and Real Estate, is set for March 3, 2023, the actual opening date has yet to be announced. It is expected to be sometime in March, and the exact date will be made public sometime in January.

How will the experience of getting in and out of the airport terminal be different?

According to McBride, the key to more efficient vehicular flow will be separate levels for arriving and departing flights, which will allow for easier passenger pickup and drop-off areas.

“Departing flight-related traffic will be routed to an elevated roadway and a curb in front of a grand check-in hall,” McBride said in an email to The Beacon. “Arriving flight-related traffic will be routed beneath the elevated roadway. Underneath the check-in hall will be baggage claim for all airlines on seven carousels. Passengers arriving on flights will be directed to a central escalator, stair, and elevator leading down to the baggage claim area.”

The new terminal will have one large parking garage with 6,200 spaces and an adjacent lot with 780 spaces. Parking fees in the new garage are likely to be slightly higher than the $23 daily rate currently in place, McBride said. The airport will continue to offer economy parking, and those lots will be configured for one terminal instead of three.

Once I reach the terminal, how long will it take me to get to my gate?

“Once through check-in and security screening passengers can easily access all airline gates,” McBride said. “Concourse A is adjacent, so steps are few and times are within two minutes. Other gates are in Concourse B which is served by a connector that has moving walkways on both sides.”

What do I need to know about security check-in? Should I expect it to take longer?

Improved airport security check-in was one of the top selling points for the new terminal. The current system, with security points at each of the three terminals, became obsolete when new procedures were put in place following the terrorist attacks of Sept. 11, 2001. KCI security lanes are cramped and, once through security, passengers are crowded into a small waiting area to await their flights.

McBride described the new system this way: “The rear of the check-in hall will feature a consolidated and flexible security checkpoint with 16 lanes to accommodate the ebb and flow of passenger volume. Average wait times are expected to improve since there will be 16 lanes together rather than fewer lanes at separate checkpoints.”

Will it take longer to pick up my baggage after a flight?

Baggage handling will shift from separate carousels in the different terminals to a central system for all airlines, with seven state-of-the-art carousels,” McBride said. “Baggage wait time is anticipated to be similar to existing waits,” he said.

McBride noted that with the current system, a malfunctioning carousel in one terminal likely will delay passengers picking up their luggage. In the new terminal, airlines can simply move the baggage to a different carousel if an issue develops.

Will I see an increase in nonstop flights? Can I catch any new international flights?

While the aviation department is hoping to see more flights added to the new facility, the number of flights is not determined by the department, but by the airlines themselves.

“During the planning for the terminal, the airlines publicly stated that they could not grow in the existing terminals because of tight spaces and the inability to efficiently connect passengers,” McBride said.

Airlines have suggested, however, that Kansas City could see additional flights with a new terminal. Besides Southwest’s pledge to increase flights, Minneapolis-based Sun Country Airlines has announced it will begin serving KCI in May 2023, after the terminal opens.

If my flight is delayed, what will my experience of waiting in the new terminal be?

“Travelers will immediately notice the wide-open spaces vs. the current narrow terminals,” McBride said. “The light and airy environment will have a Kansas City feel and will serve as a superb welcome mat for visitors.”

Passengers in the new terminal will be able to choose from 50 retail, food and beverage operators. Unlike with the current arrangement, most concessions and food will be in the secured area, where passengers will spend most of their time. Additional amenities will include help desks, performance areas, art installations, airfield views, inclusive play areas, lounges for members of the military and premium lounges.

What is the first thing visitors will notice when they fly into the new terminal?

As visitors exit the aircraft, they will be greeted by all-glass jet bridges. Inside the terminal, visitors will encounter terrazzo floors and warm, open hemlock wood ceilings.

Visitors will encounter a variety of public art within the terminal. Twenty-eight artists were chosen to participate in the $5.6 million project — the largest amount set aside for public art in Kansas City history. Of the selected artists, 75% have significant Kansas City connections and 75% are women or artists of color.

When visitors exit the concourses, “They will be amazed by the stunning multistory artwork in the atrium emulating a Kansas City fountain,” McBride said. “They will be directed to the lower level arrivals area, viewing artworks adorning the space as they descend escalators and elevators. They will retrace their baggage on one of seven carousels and then step right outside for ground transportation.”

Once the new terminal opens, how can residents share our feedback about our airport experience in a constructive manner?

Staffed customer experience desks and roving volunteers will be available for passengers to share feedback or important information within the terminal. In addition, existing channels such as the feedback form on FlyKCI.com, social media and the airport’s information line allow users to submit feedback. 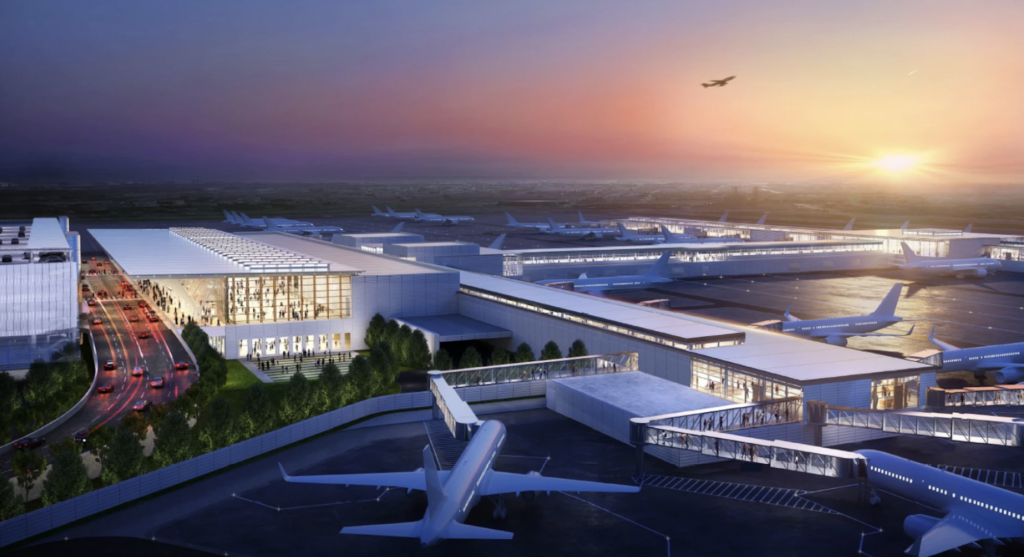 A computer rendering of the new single terminal airport at KCI, published by Build KCI in April 2021. // Build KCI

At the time of the 2017 vote, the cost of the new terminal was estimated at just under $1 billion. The project’s costs are now estimated at $1.5 billion. What happened to drive up the price?

“Following the successful public vote in November 2017 the Aviation Department and its airline partners and the new terminal developer (Edgemoor CWC) spent much of 2018 verifying the scope of the project to ensure it would meet the needs of the airlines and deliver a positive guest experience to travelers,” McBride said. “Through this process the facility grew, adding additional gates (35 to 39) and increasing the size of gate seating areas to reflect the use of larger aircraft at Kansas City International Airport.”

This story was originally published on the Kansas City Beacon.