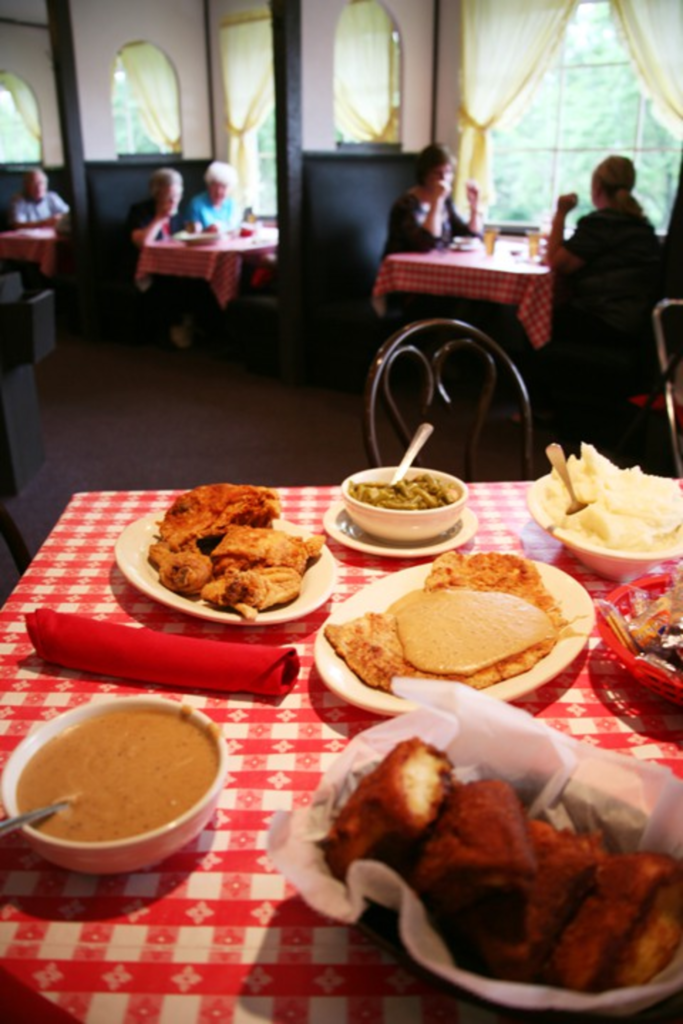 I collect old postcards of Kansas City restaurants. Over the years, I’ve found full-color cards depicting some of this city’s most iconic fried-chicken places — all long gone — including the legendary Wishbone, the Green Parrot, Victor Hugo’s and the Southern Plantation. Although this cowtown is probably best-known to outsiders for its steaks and barbecue, the locals have always been passionate about their fried fowl.

For the past three decades, Stroud’s has been the city’s prime destination for pan-fried chicken. And, I decided after visiting the brand-new Stroud’s South in Fairway, it’s actually remarkable that the place is still around after 75 years in an industry where change is a constant. Culinary trends evolve, once-popular joints become unfashionable and diners get scared off dishes we used to revere as “comfort food.” Not me, baby. The minute my doctor started yammering about trans fats, cholesterol, saturated fats and low-density lipoprotein, I went right over to the two-month-old Stroud’s and ordered a chicken dinner. But not merely because I wanted what I wanted. I was paying homage to history.

I’ll admit that I did pause while I was waiting for a table, glancing up at a framed news article about Stroud’s from the 1970s. Accompanying the story was a black-and-white photo of a very young Mike Donegan — now the restaurant’s sole owner — looking as skinny and boyishly handsome as Speed Racer‘s Emile Hirsch. I immediately turned to see the stocky, ruddy, graying Donegan walking through the dining room, carrying a thick stack of menus. What the hell, I thought, we all get old — with or without fried chicken.

What isn’t old is the new Stroud’s. Nearly three years after Donegan closed the original Stroud’s to make way for a street-widening project, it has opened in a suburban building (not far from the location of the old Green Parrot restaurant). The new place has been cleverly painted and decorated to look much like Helen Stroud’s “shack” that stood for seven decades at 85th Street and Troost. “It feels like it’s been here for years already,” my friend Addison said as we sat down at a table draped in red-checked vinyl. “It just doesn’t seem quite as raunchy as the old place.”

I don’t remember the original Stroud’s as raunchy, though it was built as a roadhouse, and the bar, even in modern times, could certainly get raucous when there was a football game on TV. The Troost location had a hell of a lot of character: the worn and uneven wooden floors, the thin cotton curtains at the windows, the heavy white china platters heaped with golden fried chicken. It wasn’t fancy, and no one wanted it to be. The new Stroud’s, which uses many of the decorative details from the now-razed Troost location, is just as laid-back as its predecessor.

Addison and Franklin had been eager to check out the new Stroud’s as soon as it opened, but reports of long waits kept them from rushing over right away. “When the novelty wears off,” Addison said, “we’ll go for dinner. But early!”

So we arrived at 5 p.m. one weeknight, and a crowd was already milling around the front steps. The hostess told us the wait wouldn’t be much longer than 15 minutes, so we gladly hung around. We were momentarily thrown off by the restaurant’s design — the bar is in the center of the main room (with tables for eating, unlike the old place), and the rest of the dining room winds around it, like a maze. Hanging in the compact waiting area are those framed articles about the restaurant’s history, which dates back to the Depression, when Helen Stroud, an insurance secretary, sold barbecue and beer out of what she called a shack at the edge of town. She didn’t start selling fried chicken, she told a reporter, until one Fourth of July when a local store was selling three chickens for a dollar. It was such a good deal that Stroud bought a bunch of birds and offered a four-piece dinner for 36 cents. There was no turning back after that.

Dinners still include a salad or soup, a choice of potato (baked, fries, cottage fries or mashed), green beans, gravy and a basket of cinnamon rolls.

Those cinnamon rolls, which I adore, are fantastic: fat squares of yeasty biscuit dough encased in crunchy, buttery cinnamon sugar. Most people request them after dinner because the hot rolls are the closest thing Stroud’s has to a dessert. That wasn’t always the story. While waiting for our table, I read a 1967 review raving about Stroud’s “outstanding cream pies.” But that was long before my time.

“They found a formula that works and have stuck to it,” Addison noted as he unfurled a red cloth napkin into his lap. I nibbled on a few crackers until the waitress brought salads for Addison and Franklin and a bowl of chicken soup for me. After the first spoonful, I realized how much I loved this comforting concoction of doughy noodles, succulent breast meat, carrots and celery. “Can I have a sip?” Addison asked. I shook my head. It was all mine.

We did share the chicken, though. Stroud’s still serves it family-style: bountiful breasts, legs, thighs and wings in a mound on a platter, surrounded by bowls of gravy, mashers, the slightly salty green beans that I never eat and the cottage fries that I can’t stop eating. That night, I succumbed to a big ol’ baked spud bursting out of its foil wrapper and loaded with butter and sour cream.

“This is the best fried chicken ever,” Addison said, greedily biting into a juicy breast. “That’s why this place will never go out of business. It’s not a restaurant — it’s a legend.”

A few nights later, my friend Lillis said nearly the same thing as she dipped a sizzling hot fried liver into a bowl of pale-brown chicken gravy. Lillis can remember dining at Stroud’s in the 1950s. She also recalls the other famous chicken places of the day, including one at 31st Street and Troost called the Peacock. “But Stroud’s was the place that everyone loved,” she told Bob, Jane and me.

That was the night I decided to try something different, so Jane and I split the pork-chop dinner, with each of us getting one incredibly tender chop broiled in garlic butter. Bob was nursing a sore tooth, so he ordered chicken fingers, a dish mostly ordered by children that turned out to be amazingly good. Lillis stuck with the chicken.

While we waited for our check and I buttered my fifth cinnamon roll of the night, we looked around at the customers at other tables and noticed that even the noisiest groups grew silent when their dinners arrived, entering a state of near rapture as they focused on their food.

At Stroud’s, pan-fried chicken is still a religious experience.