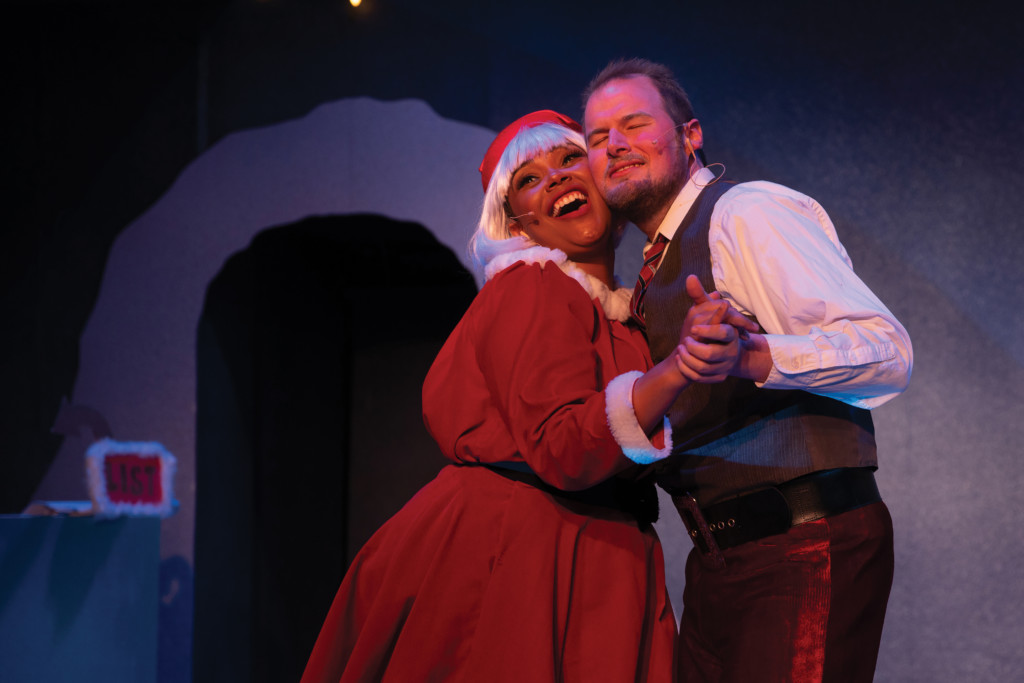 Milking Christmas at the Living Room. // Photo by Brian Paulette

A stage adaptation based on the television special of the same name, this Charles Schulz classic finds Charlie Brown on a mission to bring out the true spirit and meaning of Christmas. A live jazz trio plays along, and Snoopy meets up with the Red Baron in a “special encore.”

Adapted by Barbara Robinson from her book, this humorous Christmas show features the boisterous Herdman kids, who have their own ideas about the church Christmas pageant in which they’ve been cast.

A comedic take on Dickens, featuring a holiday revue and something called the Water Glass Symphony.

Friend Dog Studios and Ryan McCall stage the third annual production of this musical comedy at the Living Room. It’s an upside-down Christmastown, where Macey Maid-a-Milking is seeing an increase in defective toys and a higher-than-usual amount of coal. What’s up?

Hundreds of area tuba and euphonium players band together for this free concert, a holiday-season lunch-hour tradition celebrating its 40th anniversary this year. (Advance registration is required to perform, but just a reservation is needed to attend.)

World-famous French actress Sarah Bernhardt, of the late 19th and early 20th centuries, took on many roles in her time, including Hamlet. We learn all about that Shakespearean undertaking in this full-length comedy, a non-Christmas show at the Unicorn that gives KC audiences a decidedly different option.

Trumpeter Wynton Marsalis and his group of jazz musicians are joined by singers Denzal Sinclaire and Alexis Morrast. For this Harriman Jewell Series program, at the Midland, they’ll play original melodies along with cherished seasonal songs.

A few of MTH’s favorite things, according to its website, are singing, dancing, show tunes, and Christmas. This annual seasonal show promises all of these, with holiday-themed songs from the musical-theater repertoire as well as classics. 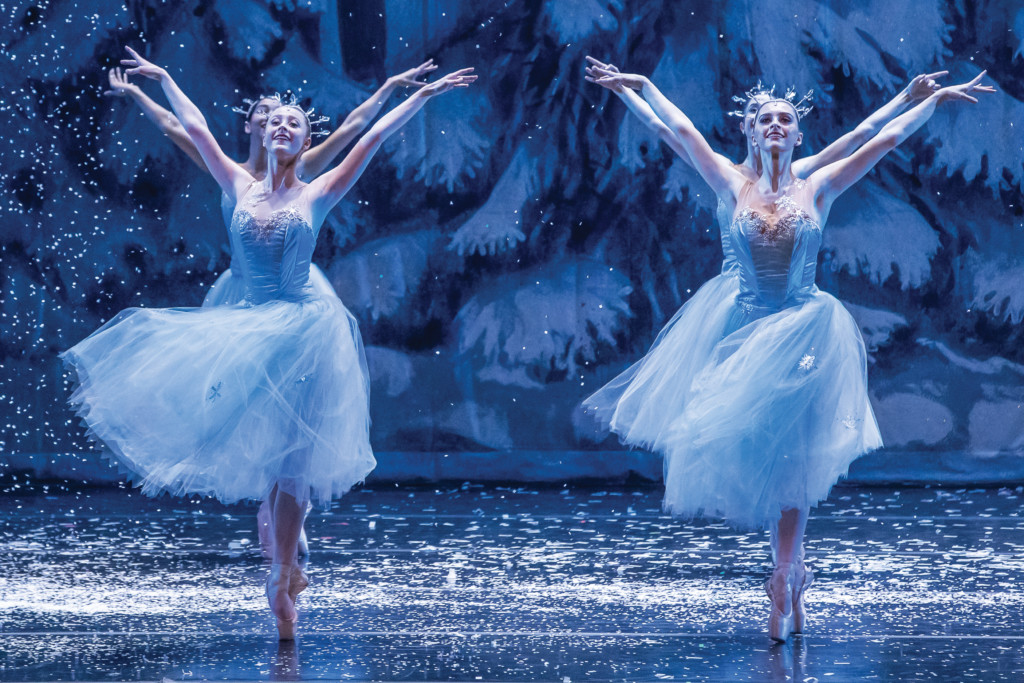 The ballet’s annual Nutcracker has become nearly synonymous with Christmas-season celebration. Tchaikovsky’s score, performed by the KC Symphony, accompanies the dance troupe—including the Nutcracker Prince, the Sugar Plum Fairy, and a girl named Clara—as they tell this 19th-century story.

The Soul of Santa aims to present just that: expressing kindness and faith through soul music. Traditionally Christian or not, this one of a kind experience aims to bring holiday cheer to African American communities by embodying family and divine love.

The KU School of Music’s Holiday Vespers, featuring KU choirs and the KU symphony orchestra, take their Christmas show on the road for a free concert at JCCC’s Carlsen Center (but tickets are required).

A family-themed musical variety show, written by Shelly Stewart Banks and Peter Leondedis, features an “ever-changing cast,” with something a bit different every night. General admission is just $10.

This oratorio (written for orchestra and voices) premiered back in 1741. Nowadays it’s a KC Symphony holiday staple. Nearly 200 musicians, including the KC Symphony Chorus, grace the stage in Helzberg Hall for the acoustic Christmas treat.

A cast of 40-plus puppets, including some that are 7 feet tall, enact this annual pageant with live music and choral singers.

Progressive-rock band TSO reimagines its original show from 1999 with new staging and special effects. “Over the top,” founder Paul O’Neill calls it. 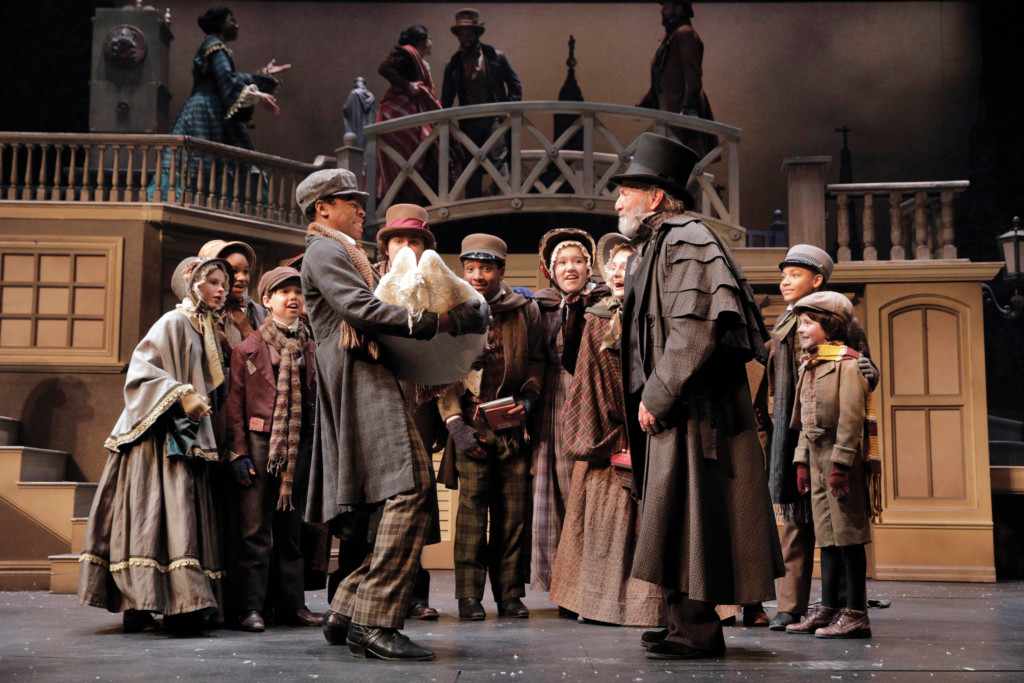 A Christmas Carol at KC Rep. // Photo by Cory Weaver

The Kansas City Chamber Choir presents a holiday choral performance at the intimate Pilgrim Chapel, home to a gorgeous stone exterior, stained glass, wooden pews, and exposed ceiling beams—excellent ambiance for an unforgettable winter-themed performance. A limited amount of tickets are free and available through the Eventbrite website.

The (approximately) 150-member chorus, which has grown from 30 singers at its founding in 1986, performs a wide-ranging Christmas concert that swings from classic to contemporary.

Chuck Haddix, host of KCUR 89.3’s The Fish Fry, emcees this holiday celebration featuring the Funky Butt Brass Band, a group that pays homage to the sounds of New Orleans, St. Louis, Memphis, and other American funk and soul hubs.

This second annual Christmas concert will feature pieces by local contemporary composers, classic carols, and world premieres by Ed Frazier Davis and Geoff Wilcken. Tickets to the event are available via the Te Deum website or online, depending on which performance you plan on attending.

The KC Jazz Orchestra swings into some seasonal tunes with the assistance of musician, singer, and dancer Lonnie McFadden, composer and trombonist Jason Goudeau, and singer Molly Hammer.

The KC Chamber Orchestra and Musica Vocale have teamed up to present J.S. Bach’s Magnificat and Telemann’s Concerto for Oboe d’amore along with other Baroque era classics. No tickets are necessary for this event.

Chipmunk Randall P. Nutbutter is getting ready for the big Christmas jamboree. But he and his cohorts — with audience help (and some singing along) — must find out who’s making off with all the holiday decorations, cookies and presents.

The a capella men’s choir Straight No Chaser shot to fame after a YouTube clip of the nine-vocalist act performing “The 12 Days of Christmas” went viral. The group performs popular songs of all kinds and will be doing both current and classic hits as well as favorite holiday tunes at this performance.

The Tallis Scholars
December 12
Cathedral of the Immaculate Conception
12th and Broadway, KCMO

This Christian band from Florida performs traditional holiday favorites plus songs from its Christmas album Decade the Halls, in which it explores the popular musical styles of each decade of the past 100 years. With costumes to match.

Rush, a Grammy-winning blues and funk singer, has been playing for nearly 70 years now. He’ll be in town with his band The Paladins and opener Vanessa Collier.

The Kansas City Civic Orchestra presents seasonal music, carols, and a special guest conductor. Donations are always welcome, but the concert is free and open to the public.

KPR and Liberty Hall team up to host the Kansas City Jazz Orchestra for an evening of very brassy holiday cheer. 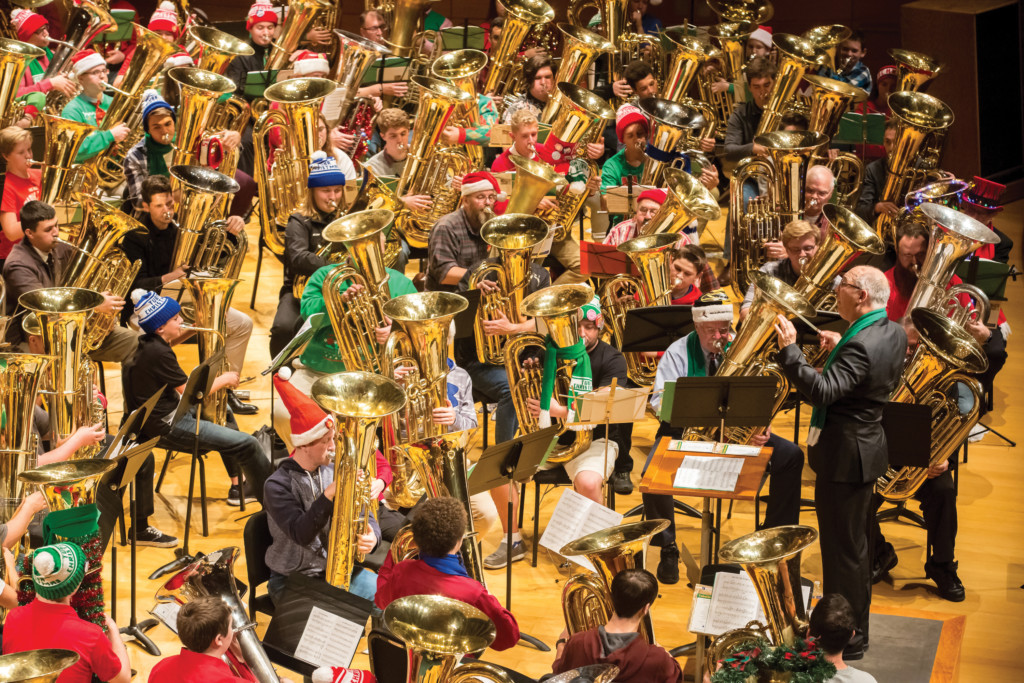 TubaChristmas at the Kauffman Center. // Photo by Eric Williams

The local, 50-member a cappella choir—an official member of the Barbershop Harmony Society—brings its award-winning vocal stylings to a Christmas concert of holiday songs.

Join conductor Dr. Paul Meier, featured choral soloists, and the Kansas City Baroque Consortium in their annual presentation of Handel’s Messiah. Bring your own score or purchase one online to join in the booming chorus. Admission to this event is free.

Cellist Sheku Kanneh-Mason won the 2016 BBC Young Musician of the Year award, performed on Britain’s Got Talent, and was a featured musician for Prince Harry and Meghan Markle’s wedding. He’s 20. Though not holiday themed, this show offers a (free!) opportunity to see his awe-inspiring talent in person.

The 50-voice a capella choir Festival Singers will be joined by Victoria Botero, Kansas City Bronze, Canon John Schaefer, and director Denise Trawicki for traditional carols, holiday favorites, and readings. Tickets are available through the Festival Singers website, but arrive early for the best seats.

A stew of acrobatics, illusions, juggling, and dancing set to Christmas music and themes, this show from the producers of Broadway’s “The Illusionists” promises to be one of the top spectacles of the KC holiday season. 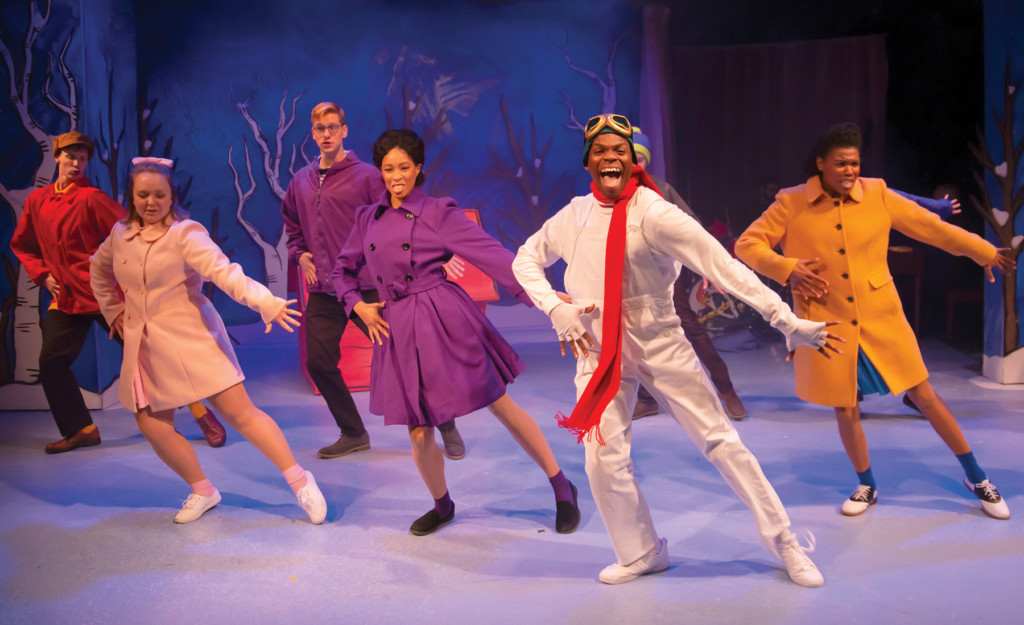 Since 2010, this group of choral singers and musicians has come together from around the country to perform musical programs in KC. For the holidays this December, they bring period instruments to candlelit churches for Handel’s Messiah.

On the program at this annual holiday celebration, designed for the entire family, are choirs, carols and seasonal songs. Added bonuses: a special “visitor from the north” and a jewelry prize giveaway from Helzberg Diamonds.

Focusing on imagery of light, Kantorei premieres “The Longest of Nights” and offers readings of medieval as well as modern poetry about Christmas.