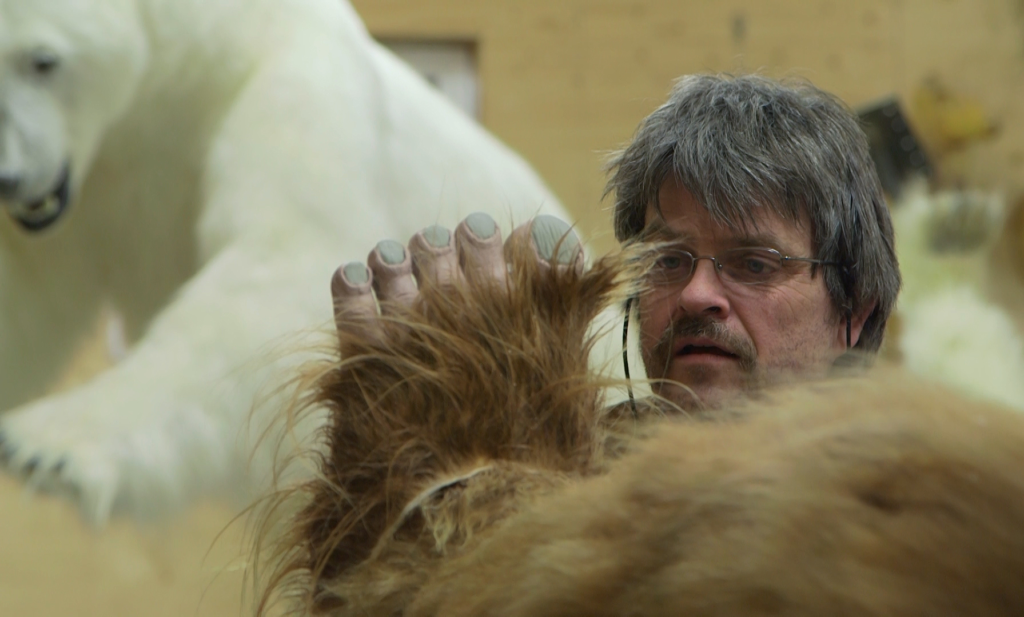 Alan Alda once advised, “Never Have Your Dog Stuffed.” But as KC-based director Dan Wayne’s new documentary Big Fur demonstrates, the M*A*S*H star may have simply visited the wrong taxidermist.

If the doc’s subject, Ken Walker, Jr., had done the job, it might have looked as if your beloved pooch had never died.

Walker has won countless awards for his work, and he’s eager to share his techniques for making everything from reptiles to pandas look as if their souls are still in their bodies. Walker is so proficient that he can even build a Bigfoot despite the fact that he’s got no skeleton or skin to work with.

Walker’s achievements must truly be seen to be appreciated, which is why it’s wonderful news that Walker, his astonishingly lifelike Bigfoot, and Wayne will be attending a screening of Big Fur on Sunday, May 5 at the Screenland Armour. The Pitch recently caught up with Wayne at a coffee shop a few blocks from where he lives in the River Market. We spoke about taxidermy as an under-appreciated discipline and why Bigfoot still haunts America’s dreams.

The Pitch: How did a Canadian taxidermist get on your radar screen?

Dan Wayne: I started studying taxidermy. I thought it would be something I would be interested in doing. I found this forum on the internet that was this amazing source of taxidermy information.

It used to be that you couldn’t learn it until you took this correspondence course or you did an apprenticeship. Taxidermists are really secretive about it. The internet kind of democratized that. Everybody started sharing everything. It was kind of like a revolution. This forum grew, so I started to research and ask questions, and I started to get more interested in the characters who were on there. Some of the greatest taxidermists in the world are on there, so I started thinking there was a good documentary in here somewhere.

I knew about Ken. I found out he was doing a coyote workshop in Indiana, and so I signed up for it. He ended up calling me, and we ended up talking for over an hour. He’s a perfect subject, and when he told me he was going to make the Bigfoot, I thought, This will be perfect. Because there will be a beginning, a middle, and an end.

What’s intriguing is he’s preserving a creature that may not exist. There’s not a deceased animal to build from.

Precisely. He can do anything. He’s done birds. He’s done reptiles. He’s done mammals. He’s more known for his mammals and his recreations. He’s done a sabertooth tiger. He did an Irish elk, and he’s done a giant panda when he worked for the Smithsonian. He does this very scientifically. He’ll study bones. He’ll study carcass casts of the panda and things like that. It wasn’t such a stretch for him to do a Bigfoot. He did it in the way he’d do his other animals.

While finishing the Bigfoot is a given, there’s a lot of other stuff in his life.

Life is messy. I think if you hang out with somebody for three or four or five years, something’s going to happen. It caught me by surprise. I kind of figured it would be a footnote, but it ended up being a devastating, life-changing event for him. He came here to Kansas City to record a few songs. He was pretty bent out of shape about it. Normally, he would only talk about Bigfoot, but in this case he would only talk about [his personal life].

Taxidermy is somewhat maligned, but Walker’s ability to do his job would be impossible if he didn’t love animals, and his craftsmanship makes you think his creations are alive.

It happens all the time when I tell people what I’m doing. One of my mom’s friends doesn’t want to attend this screening because she’s afraid she’ll be grossed out. There’s no gross parts in this. I intentionally didn’t show anything gross, but there would be no reason to.

He also does a Memorex-level impersonation of Roy Orbison.

And not just Roy Orbison. There’s a lot of people in the film he does perfect imitations of, but you’d never get him to do it on film. I suspect he imitates me when I’m not around. I don’t know. I’ve never heard it.

He’s so open about what he does otherwise.

When they [taxidermists] get together, you can see that they’re really excited to be with other people like them. One of them had given a kidney to another he didn’t even know. It surprised me, but it doesn’t surprise me now that I know all these people. They have a lot of people waiting for their deer heads, and six months later the customers are mad. [Taxidermists] are loners. They have a crazy backlog. They deal with that stereotype of that creepy, psycho, kind of Bubba in the backwoods garage. I wanted to show that it’s a legitimate form of art. It’s unique in that it requires a lot of different skills. It requires a knowledge of science and anatomy, and then there’s the craft of it, and then there’s the art of it. Not all taxidermy is art, but some of it is.

In addition to the fact that we’ve never been able to find Bigfoot, why do you think Bigfoot is still part of American folklore?

There’s the kitsch element to it. But I think that, deep down, people are in love with the idea that there could be something that we don’t know about. It’s the unknown. Bigfoot is a metaphor for the last remaining wilderness. If there’s no wilderness, there’s no Bigfoot. Bigfoot has to live in the wilderness. There’s thousands of years of history of a wild man of the woods. I think people are more willing to grab onto that concept because there isn’t much wilderness anymore. When you’ve lost that, you’ve lost something more than important than Bigfoot.