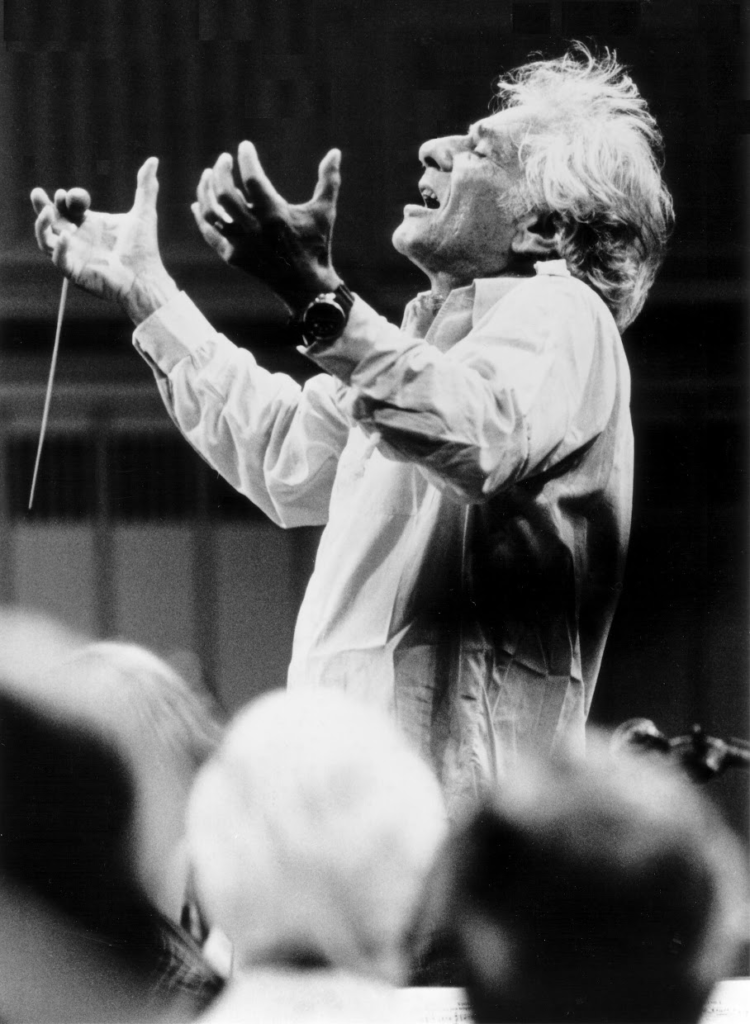 When the news fills with divisive talk of border walls, I think of the wall that came tumbling down some 28 years ago. I think of Leonard Bernstein, in Berlin, leading an orchestra of German, British, American, French, and Russian musicians through Beethoven’s Symphony No. 9, in a concert televised across the globe. Bernstein, 71 years old, sick and sweating, but shying away not at all from the jubilance and triumph of the event, eyes squeezed shut as the audience begins to clap at his final, exultant “Ode to Freedom.”

Bernstein was a first-generation American from a not-particularly-musical Jewish family in Boston. He became, perhaps, the greatest rock star in the modern era of classical music. Bernstein was magnanimous, charming, egotistical, handsome, incorrigible, erudite. He was as adept at addressing political leaders as he was children, as many learned from his popular Young People’s Concerts from 1958-1972.

From his rushed debut in 1943 to his final appearance in 1989, Bernstein led the New York Philharmonic in over 1,000 concerts. The music he wrote, like the ever-popular “West Side Story,” crossed all barriers of classical and popular, from high art to delicious kitsch, leaving an astounding output that is his most lasting legacy.

Bold and brash, Bernstein nevertheless struggled to live his truth, challenging the societal expectations of the day. Deeply in tune with his Jewish heritage, he was an outspoken activist and humanitarian, promoting civil rights, anti-militarization, and AIDS research.

I also think about Bernstein (“Lenny” to those who knew him) introducing a seven-year-old prodigy, an immigrant of Chinese heritage, to President John F. Kennedy. “Art…flowing into and out of America, has long been the attraction of our country to foreign artists and scientists and thinkers,” Bernstein said, “[They] come not only to visit us but often to join us as Americans, to become citizens of what to some has historically been the Land of Opportunity, but to others the Land of Freedom.”

That prodigy was cellist Yo-Yo Ma. He joins the Kansas City Symphony in March for its “A Century of Bernstein” celebration, with KCS performances honoring the man and his music from February through June.

Bernstein’s conducting style — emotive, exuberant — drew ire from the stodgy critics of the day, but was never without musical connection. (A double plus for the 21st century: Bernstein’s dramatic gestures and facial expressions are magnificently GIF-worthy.) One sees his influence in Kansas City Symphony’s own music director Michael Stern, who grew up knowing Bernstein both professionally and as a family friend.

Some local organizations have already begun their Bernstein centennial homages. The Lyric Opera of Kansas City performed “Arias and Barcarolles” as part of its Explorations Series last October, and Kinnor Philharmonic opened its New Years Day concert with the overture to “West Side Story.” Other local groups have performances planned for the 2018/2019 season.

Bernstein did not hide in a fortress of his art, separate from the musicians, the audiences, or the man on the street. He instead used his art, his passion, and his position to challenge and criticize, to break down barriers and build connections. That legacy is what I celebrate this year — and every time I think about him.

A Century of Bernstein: Beethoven’s “Eroica” with Bernstein’s Serenade